DNA shows girl had one Neanderthal and one Denisovan parent | Techilink 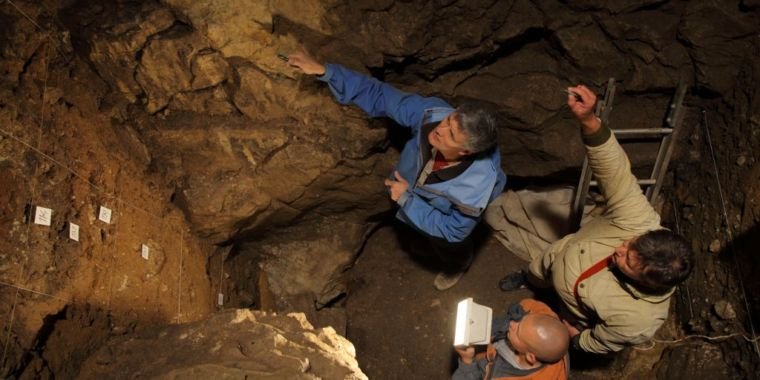 You could be forgiven for thinking that the first modern people to venture out of Africa found themselves in a lively bar scene. DNA from just a single cave in Siberia revealed that it was occupied by two archaic human groups that interbred with the newly arrived modern humans. This included both the Neanderthals, who we knew about before, and the Denisovans, who we didn’t even know existed and still know little about except their DNA sequences. The DNA also revealed that one of the Denisovans had a Neanderthal ancestor several hundred generations back.

But in almost all of these cases, the ancestors seem to have come from a single exchange of chromosomes many generations earlier. There was little evidence that the crossing was frequent.

Now the same cave has yielded a bone fragment indicating that the intersection may have been common. DNA sequencing revealed that the original owner of the bone fragment had a mother who was Neanderthal and a father who was Denisovan. The fact that we have so few DNA samples from this time and that one is the direct product of mixing gives us a strong indication that we can expect more samples in the future.

The Denisova Cave is located in Russia near the borders with China, Kazakhstan and Mongolia. It appears to have conditions that favor the preservation of ancient DNA, as bones from the site have yielded high-quality genomes of both Neanderthals and Denisovans. It does not appear to have aided the preservation of skeletons themselves, as most of the material was fragmentary; everything we know about the appearance of Denisovans comes from a molar and a small finger bone, although dating suggests they inhabited the cave more than 30,000 years after Neanderthals.

Due to the fragmentary nature of many of the bones, the team exploring the cave slowly moved through them, determining which ones are human by looking at the collagen that makes up much of the bone. A human ID made them focus more on a fragment called Denisova 11, which originated in a long bone (such as an arm or leg bone) from a person who was at least in their teens. Beyond that, there was nothing distinctive enough to determine which part of the body the fragment came from, let alone which group of people the owner belonged to, though radiocarbon dating placed it at a time when Denisovans were known to occupy the cave.

To find out more, the researchers sequenced the mitochondrial DNA. Since this is only passed on through the egg, it tells you about the mother of an organism. In this case, the mitochondrial DNA was clearly Neanderthal, which was somewhat surprising given the date on the bone. In any case, this was enough for the researchers to decide to sequence Denisova 11’s genome. It was completed in such a way that the average base was sequenced 2.6 times, meaning there are still many gaps and uncertainties in the genome. Nevertheless, it was sufficient to perform some detailed analyses.

The first thing that was clear was that Denisova 11 was a she; X chromosome sequences were as common as those of any other chromosome, suggesting she had a few. The other was that the researchers’ excavation techniques were very good, as contamination with the DNA of those who did the excavations could not account for more than 1.7 percent of the total sequences. Furthermore, most of the results were unexpected.

Because we now have several Neanderthal and Denisovan genomes, we have some idea how they consistently differ from each other and from the modern human genome. Running Denisova 11 through an analysis of these differences revealed that she was an almost even mix. Rather than being mostly Neanderthal, as you would expect from the mitochondrial DNA, only 39 percent of the DNA fragments were clearly Neanderthal. In contrast, another 42 percent were Denisovan, meaning she was almost an even mix of the two groups of archaic people.

The authors checked other samples they sequenced at the same time for signs of contamination and also looked for a possible software problem, but the results held up. There are two ways to explain that. One is that she is a direct product of a mating between these two different people. The second is that she is part of a population of hybrids, where her parents both carried mixtures of Neanderthal and Denisovan DNA.

To find out what happened, the researchers looked at each individual site where Neanderthals and Denisovans differ. If Denisova 11 were the product of a mixed population, you would expect a fair number of these sites to be either all Neanderthals or all Denisovans, as the genomes would have to be mixed quite randomly. If it was the direct product of mating between individuals from different groups, you’d expect many of these sites to have Neanderthal and Denisovan versions. (You wouldn’t expect them all to be like this, as we don’t know the full diversity of Neanderthals or Denisovans at this point.)

The results clearly favored her being a 50-50 mix. “We conclude that Denisova 11 is not from a population with equal proportions of Neanderthal and Denisovan ancestors,” the researchers conclude. “On the contrary, she was the progeny of a Neanderthal mother, who contributed to her … [mitochondrial] DNA and a Denisovan father.” The differences were also spread evenly across her genome, as one would expect if each half of each chromosome pair came from a different group of ancestors.

A more detailed look at her ancestry showed that there were at least five small regions where both chromosomes appear to have Neanderthal ancestry, suggesting that Denisova 11’s father came from a population that had interbred with Neanderthals in the distant past. And her mother appears to be most closely related to a Neanderthal skeleton found in Croatia, rather than a descendant of the Neanderthals who inhabited the same cave tens of thousands of years earlier.

Mixing and yet distinctive

The authors argue that, despite the evidence in modern genomes, Denisova 11 strongly suggests that crossing was common when two different groups overlapped. After all, we haven’t taken much from archaic humans, and we’ve already found one that is the direct product of crossing between two groups.

So why is there the difference between this expectation and what we’ve seen in other genomes, suggesting that the two groups appear to be largely different lineages? First, we don’t really know how often different populations overlap. Based on where modern populations have higher levels of Denisovan DNA, we can conclude that Denisovans lived in East Asia, but the details of where and when are simply unknown. The full extent of Neanderthals’ range is also poorly limited.

All of this means that interbreeding could be limited by the fact that the populations just didn’t encounter each other that often. “This, as well as possibly reduced fitness of individuals of mixed ancestry, may explain why Neanderthals and Denisovans remained genetically different,” the authors conclude.

In contrast, modern humans seem to have displaced the Archaic quite quickly, suggesting that there was a limited window of time in which interbreeding could have occurred. Still, the clear signs of interbreeding and apparent willingness to coexist in the past may indicate that modern humans have absorbed earlier populations rather than completely displacing them.

But there’s also a little nugget in the paper that suggests this isn’t the last time Denisovan Cave will radically change our understanding of our ancestors. The only skeletons mentioned in the paper are Denisova 3 and Denisova 11, but the paper notes that “more than 2,000 undiagnosed bone fragments have been excavated in Denisova Cave.” That means there are probably many more potential DNA sources that we haven’t looked at yet.