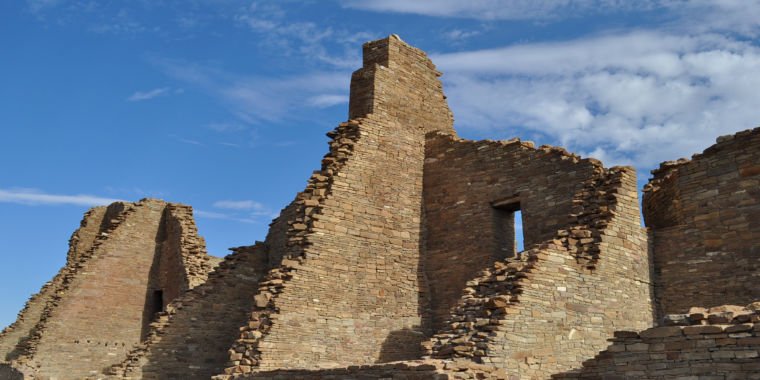 Many macaw parrot skeletons and feathers have turned up in human settlements in the southwestern US and northwestern Mexico dating back to at least 900 CE. Since these sites are at least 1,000 kilometers north of the bird’s natural range, it has long been apparent that there was an interesting story here. How were macaws traded across cultures and over such long distances, long before the arrival of the Spanish and their horses?

Between 1250 and 1450, a settlement discovered at Paquimé in Mexico appears to have organized a macaw breeding program that must have met the demand for this culturally important bird in the region. But what about before Paquimé? Archaeologists have discussed the possibilities: that traders often traveled the long route to bring back macaws, that birds were traded haphazardly between settlements, or that there was an earlier nesting site.

A study led by Richard George of Penn State attempted to answer this question using DNA from scarlet macaw skeletons found in the Chaco Canyon and Mimbres settlements of New Mexico. Techniques to recover fairly complete DNA sequences from archaeological specimens have advanced in recent years, allowing researchers to test hypotheses with much more confidence.

They also carbon dated the skeletons and found that their specimens lived between 900 and 1200 CE, thus clearly older than the Paquimé breeding. Of the 20 macaw skeletons they analyzed, the researchers managed to collect a sufficiently complete mitochondrial genome from 14.

Because mitochondrial DNA is inherited unaltered from the mother, it is a great marker for comparing populations. In this case, the researchers compared the archaeological specimens with a database of modern (1800-present) scarlet macaw populations. There was terribly little difference between the 14 birds. They all fell into the same macaw group, which can be found in northern Guatemala and nearby southeastern Mexico.

Other genetic groups can be found in that same area, so it’s extremely unlikely that traders would periodically capture birds and transport them to New Mexico’s Chaco Canyon. If that were the case, you would expect birds from multiple genetic groups.

Instead, the researchers believe the best explanation is that someone captured a few birds, moved them somewhere much closer to Chaco Canyon, and set up an isolated breeding population. In that situation, genetic diversity would remain very limited.

That would indicate an undiscovered settlement out there somewhere that bred scarlet macaws in the centuries before Paquimé was founded. And it highlights the fact that cultural and trade interactions were common among many of the peoples living at that time.

It’s a pretty detailed story to tell from a few bird bones. Scarlet macaws were clearly prized and important enough that people went out of their way to get them. And it seems someone somewhere carefully bred birds to trade with communities across the region.