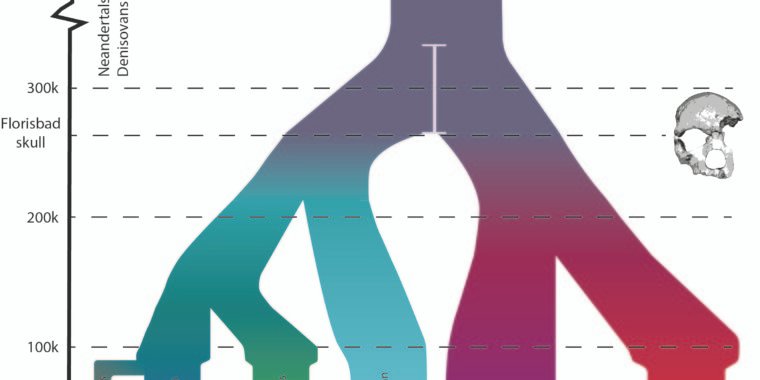 When did humanity begin? It has been proven to be a difficult question to answer. Anatomically modern humans have a distinct set of features that are easy to identify on a complete skeleton. But most ancient skeletons are partial, making identification challenging. In addition, other skeletons were left behind by pre-modern (or archaic) human relatives such as Neanderthals who were present in Africa and Eurasia at the same time. While Neanderthals et al also have different traits, we don’t always have a good idea how variable those traits were in these populations.

So when a recent paper argued that a semi-modern skull meant humanity was older than we thought, some people dismissed it as an exaggerated finding.

A new article was published on Thursday claiming that humanity is older than we thought. The finding is based on a different kind of evidence: a genome from a Stone Age skeleton in southern Africa. There’s enough uncertainty in the work that this won’t resolve the issue, but the paper reinforces previous findings that the secret to understanding our past will be found in Africa.

Genetics and paleontology both agree that Africa gave birth to modern humans. The earliest distinctly modern skeletons have been found there, and genetics have suggested that a group of African hunter-gatherers represent the earliest ethnic group on Earth. This group, the Khoe-San, has the most genetic diversity of any human population we sampled. Since the diversity increases over time, it means that they are the oldest. Thus, it appears that the Khoe-San were the first group to branch off from the modern human family tree and survive to the present day.

Given some measurements — such as the frequency of mutations and the typical time for each generation of humans to reproduce — it’s possible to use that diversity to estimate the age of the Khoe-San split between 100,000 and 150,000 years ago. Humanity as a whole must therefore be at least that old. When first estimated, it was consistent with the appearance of modern human skeletal features in the paleontological record. So almost everyone was happy.

But more recently, finds such as the skeleton mentioned above have been made. And others have wondered if the Khoe-San had such a nice genetic split from the rest of us. The region of South West Africa they inhabit was engulfed by the immense Bantu expansion, which spread Iron Age agriculture and technology across sub-Saharan Africa. If some Bantu DNA spread in the Khoe-San population, our estimates would be off.

That is exactly the problem the new paper addresses. It does this by obtaining DNA from skeletons of Stone Age Africans in the same region now occupied by the Khoe-San. These predate the arrival of the Bantu in the region and thus should have genomes representing the ancestral Khoe-San population.

(The team also simultaneously sequenced DNA from four Iron Age African skeletons and showed that the Bantu didn’t just bring technology; they carried genetic variants that conferred some resistance to malaria and sleeping sickness. These were absent from the Stone Age skeletons.)

The authors obtained only one decent-quality genome from the three Stone Age bones from which they obtained DNA. But that skeleton clearly groups genetically with the Khoe-San, indicating that the researchers’ expectation about its affinities was correct. However, a comparison with modern Khoe-San genomes indicated that the modern ones have received contributions from an additional human lineage. Everything indicates that this DNA came from East Africa and came from a population that had already interbred with Eurasians.

This doesn’t mean the Khoe-San aren’t the oldest lineage of humanity, but it does mean they aren’t genetically isolated from the rest of us. Which would forfeit the date of their split from all other lineages of mankind.

So, how old are they? Comparing the Stone Age genome to other modern human genomes yields values ​​ranging from 285,000 to 365,000 years. The most extreme split is that of the Mandinka, a population group that currently covers much of West Africa; the date of which appears to be 356,000 years.

Again, the Khoe-San are modern humans. And if they split off that long ago, then modern humans have been around for at least that long. And that is significantly older than previous genetic estimates.

But there are caveats. These estimates are very sensitive to the frequency with which new mutations arise in human lineages, as well as the typical human generation time. Both values ​​have been at stake in recent years. If the field reaches a different consensus value, these estimates will change. The authors also point out that the split may appear older because the ancestors of the Khoe-San had interbred with a population of archaic humans, just as the ancestors of non-Africans had interbred with Neanderthals. That possibility will be difficult to rule out.

In the big picture of human evolution, a date of about 300,000 years ago would place the origin of modern humans almost halfway between the present and when Neanderthals and Denisovans split from our lineage. It also happens to be around the same time as Middle Stone Age technology. It’s appealing to think that whatever breakthrough made us “modern” led to some kind of mental leap that made new technology possible. But, as the Bantu themselves have shown, the connection between a skeleton’s appearance and the technology its owner used can be extremely tenuous.