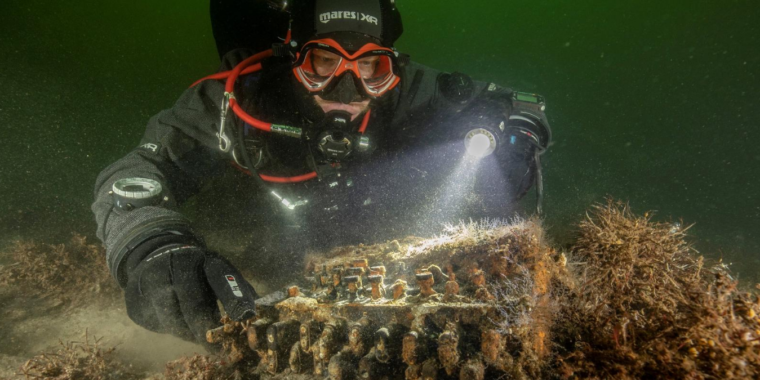 When Nazi naval officers threw their ship’s Enigma encryption machine overboard, they probably thought they were putting the device out of everyone’s reach. Blissfully unaware that Allied cryptanalysts in Poland and Bletchley Park in the UK had broken the Enigma code, the Nazis had standing orders to destroy their encryption devices to keep them out of Allied hands. Eighty years later, divers found the once-secret device entangled in an abandoned fishing net on the seafloor, and now it will be on display for all to see. LOL, Nazis teased.

Research diver Florian Huber and his colleagues were trying to clear up abandoned fishing nets in Gelting Bay, on the Baltic Sea near the German-Danish border, when they found the artifact. Derelict nets and other discarded fishing gear can still entangle fish, sea turtles, diving birds and marine mammals such as seals and dolphins. The World Wildlife Fund had hired the divers to clean them up in November 2020.

“A colleague swam up and said, ‘There’s a net over there with an old typewriter in it,” Huber told DPA news agency.

That’s not a typewriter

During World War II, the Nazi military used the Enigma device to encrypt important communications about military plans and movements. To encrypt a message, the sender typed a plain text message, such as “We attack at dawn” on the machine’s keyboard. The machine converts each letter typed into a new letter to scramble the message into something like “XN LUSJVD TW SFPQ”. When the recipient types the encrypted message on an Enigma device with the same settings, “XN LUSJVD TW SFPQ” again becomes “We attack at dawn”.

You may have noticed that although the letter “A” appears four times in the original message, it is encoded differently each time in the Enigma-encoded version. That’s because the Enigma machine used a set of rotors to change the code for each letter every time the operator pressed a key. The absence of clues such as repeating letters made it more difficult for cryptoanalysts to crack the code. After all, something like “FPPFKL FP RFMQ” is a little easier to parse into “Attack at dawn”.

The machine divers recently fished out of Gelting Bay had three rotors, meaning it likely came from a surface warship, not a Nazi submarine or U-boat. From 1942, U-boats carried a four-rotor model of the Enigma device. Several U-boat commanders sank their submarines in May 1945 as the Allies approached. But the presence of a three-rotor machine suggests that at least one surface ship officer also jettisoned their Enigma machine in the final days of the war.

After 75 years at the bottom of the sea, the Enigma machine was in remarkably good condition. But curators at the Schleswig Holstein State Archaeological Museum in Germany say it will need about a year of cleaning and restoration before it’s ready for display.

Settings that programmed the rotors to replace new letters changed every 24 hours; each unit had a codebook of daily settings, which was pre-issued. To decrypt a message, the recipient’s machine had to use the same settings as the sender. Otherwise, the code seemed almost impossible to crack.

At Bletchley Park, a top-secret facility hidden in a British estate, mathematician Alan Turing and his colleagues were able to read encrypted Enigma messages by 1941. Throughout the war, they kept up with the constant upgrades from Nazi cryptographers to Enigma.

Less than a decade after the war, Turing committed suicide shortly after a British court sentenced him to chemical castration for homosexuality, which was then illegal in the UK. His role at Bletchley Park was not very well known at the time; the allies kept the decryption of Enigma a closely guarded secret until the 1970s. Historians generally agree that breaking the Enigma code probably shortened the war by at least years, although that sort of thing is nearly impossible to quantify.