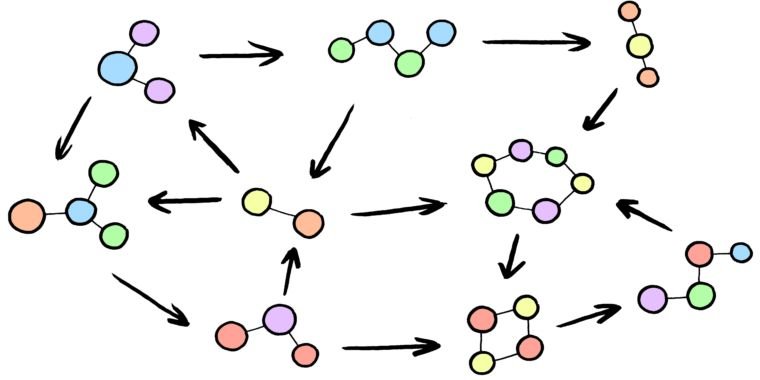 This seems like a good week to talk about quantum memories and the proliferation of qubits. The thing about working with quantum states, though, is that you don’t have a lot of room not to mess it up. And in hindsight it’s hard to figure out when you made a mistake. Once you’ve made a measurement on a quantum system, there’s no going back to its original state.

Impure diamonds are the best diamonds

This is a story about the generation of entangled quantum states in different locations. To understand how the researchers can do that, we need to look at how a qubit state can be encoded in a piece of diamond. Most diamonds have some amount of nitrogen. The bond between the carbon and the nitrogen leaves behind a rather unfortunate electron. It’s still bonded to carbon, but the electron doesn’t really want to be. So it floats around between the carbon and the nitrogen atom.

This electron has its own states. Two low-lying states can be addressed by microwaves; these serve as the one and zero states. They can be set and measured by hitting the electron with a laser and looking for a photon in response. The ease of manipulation and measurement makes this an excellent qubit for computation.

The nitrogen vacancies in diamond have an advantage that comes from another impurity: an isotope of carbon. Most carbon has a nucleus with six protons and six neutrons. But one in every 100,000 carbon atoms has an extra neutron. Like the spare electron, the extra neutron creates a range of energy levels within the core which can be used as a qubit. The nuclear qubit has the advantage of having a nice long lifetime, while the transfer of quantum states between the nuclear qubit and the electron qubit is fairly straightforward. That makes the nuclear qubit a great memory.

As a result, diamonds with a little nitrogen have lots of randomly placed qubits that are excellent for computation and communication (the electrons), and nearby isotopes of carbon that provide natural memory (the heavier carbon isotope).

Entangle them with qubits

If you want to perform a computation with more than one qubit (say, two qubits), you have to entangle them. To do this, two of the nitrogen vacancies are hit with laser light: each nitrogen vacancy may or may not emit a photon. The (potential) photons are mixed on a partially reflecting mirror and sent to a pair of photo detectors. If a detector clicks, a photon has been detected and it should be impossible to tell which nitrogen vacancy it came from. This lack of knowledge entangles the two qubits.

Unfortunately, no experiment is perfect. So a test for entanglement would reveal that the qubits are barely tangled up. And this is a problem because quantum computing depends on good entanglement.

To make things better, the trick is to use a second set of entangled qubits to reinforce the entanglement of the first two. To achieve this, the researchers make use of the built-in memory in the carbon of the diamond crystals. After entangling the two computational qubits, they transfer both states to their respective memories. Now the two memory qubits are entangled, although the entanglement is still quite low quality.

The researchers in the Netherlands showed that this worked by measuring state fidelity, which is basically a measure of the probability of finding the qubit in the state it was set in. Ideally, this is unity: you always measure the condition as you set it. For a single pair of entangled qubits, the reliability was less than 50 percent. However, that increased to about 60 to 70 percent when a second entangled pair was used to improve entanglement.

I have to keep in mind that 60 to 70 percent is nowhere near enough to be useful. However, this is after only a single attempt to improve the entanglement. In principle, another pair of entangled communication qubits can be used to distill even more out of them.

This is useful for quantum key distribution, where you want to gradually move a qubit state through a chain of well-separated qubits. However, we should not forget that all these qubits are scattered randomly by diamond crystals. It’s no small task to go through them, find a few that have reasonable features (like a 13nearby C atom), then deposit electrodes and position optics to access those qubits without interference from neighboring, unwanted nitrogen vacancy centers.

So I can see this working as a communication node, but not as a compute node. However, there are ways to create grids of nitrogen vacancies. This could overcome some of the challenges of using nitrogen vacancies and expand the types of things you can do with them.