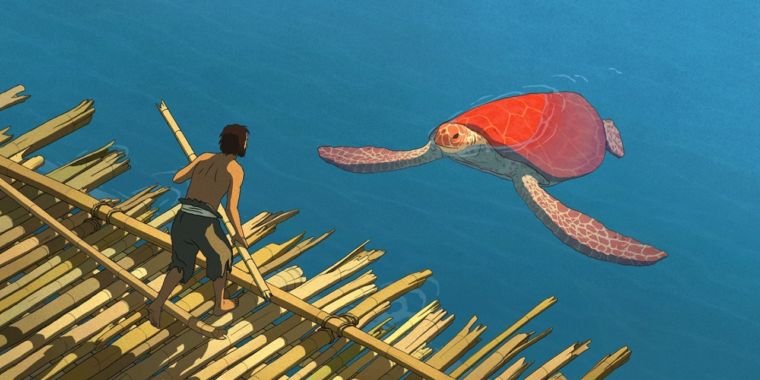 AUSTIN, Texas—It’s not just the genres that vary at Fantastic Fest, but also the way they’re presented. It’s common to see mashups (such as Anne Hathaway + kaiju = colossal) or films with the same premise (“documentary about movie posters and artists” performed in completely different ways.

So it should come as no surprise that Fantastic Fest’s animated films also embrace this ethos – these aren’t your typical Disney-esque, kid-friendly cartoons. Three in particular stood out from what we saw: The red turtle, Nova seedand My entire high school is sinking into the sea. And the one thing these movies seem to have in common is their choice to shun live-action.

The pace and grace of a turtle

On the surface, The red turtle is like an animation 127 hours– a man, stranded, who continues to go against nature in the name of survival. But since Turtle is a co-production of the legendary Japanese animators at Studio Ghibli (aka Hayao Miyazaki’s studio), nothing is as simple as it seems.

There’s not that much magical realism in it The red turtle as there is in such a thing Howl’s Moving Castle, but these sequences will bring a smile to Miyazaki fans. When the man chases disappearing string ensembles or soars over an infinite bridge over the water, it offers both character and audience a delightful escape from the seemingly inescapable island. This movie doesn’t offer much of a traditional story – the nameless man tries and tries again to build a raft to get back to civilization, but nature keeps throwing obstacles – and he opts for allegory instead. Nature is omnipotent; without everything else there is still joy in the family; never giving up will lead to something.

For discerning viewers, I imagine there is much more to discover. For the rest of us, there’s still a lot of fun in this artistic 81 minutes. The red turtleMiyazaki’s animation is as charming as you’d expect from Miyazaki’s studio. Every scene in which the stranded man is framed as a small dot against the landscape is especially magnificent. And the group of little crabs he befriends turn out to be charismatic and funny just by action and looks.

Speaking of speaking, the script lacks any discernible dialogue, making sound design vital. As with its visuals, The red turtle is up to the task. As disparate birds chirp, the man runs through the woods as we hear his footsteps, his hurried breathing, the rustling of the leaves. The isolation would be vivid even if you never opened your eyes (the movie makes an unexpected rainfall startling and almost monstrous instead of being the stereotypical soothing white noise.)

Studio Ghibli diehards will want to set The red turtle on their radars as soon as possible The red turtle may be more of a hit for others due to its pacing and ambiguity. This is a slow-burning yet rewarding film, one that evokes emotion through brilliant simplicity.

As noted by Austin360, Sony Pictures Classics will be released The red turtle in New York and Los Angeles for an Oscar qualification on November 18. The release of the film will be extended in January 2017.