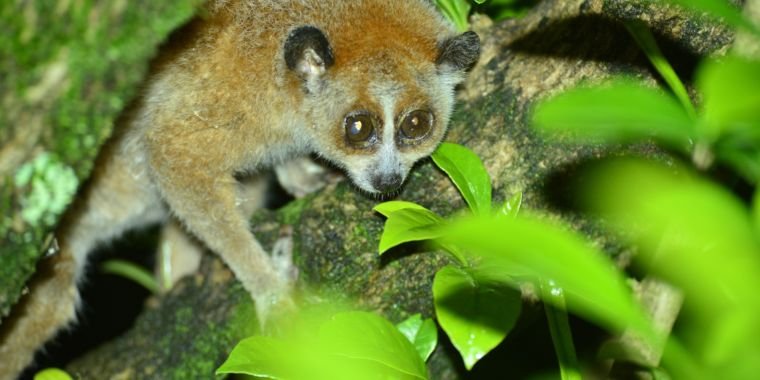 Most mammals are nocturnal, but even those that are not nocturnal have large eyes that are better suited to low light. Their eyes are more like the eyes of nocturnal animals in other clades than the eyes of animals that spend their time in daylight. After studying this peculiarity, optometrist Gordon Lynn Walls in 1942 posited what has been called the “nocturnal bottleneck” hypothesis: the ancestors of all modern mammals were once nocturnal.

Walls argued that this bottleneck occurred during the Mesozoic Era, when dinosaurs ruled the day. Mammals couldn’t venture into the sunlight until that mass extinction 65 million years ago rid the planet of those pesky dinosaurs. It’s definitely a nice idea, but it’s been hard to prove anatomically or morphologically precisely because most mammals, regardless of their behavior patterns, have eyes that still look nocturnal. This makes it difficult to determine exactly when the diurnality originated.

A study of the behavior of ancient mammals might help, but of course it is difficult to monitor the behavior of an extinct animal. Fossil evidence is sparse, but ancestral features and behaviors can be extrapolated from a broad enough analysis of current species.

Unfortunately, most studies of mammalian activity to date have focused only on us and our favorite laboratory animals: primates and rodents. Zoologists and geneticists in Israel and England have thus collected the behavior of 2,415 different mammal species, spanning more than 90 percent of mammalian families and all 29 mammalian orders, to try to reconstruct mammalian ancestral activity patterns and see when diurnality first emerged .

These researchers sifted through observations recorded in journals, field guides, and encyclopedias, and classified each species into one of five activity groups: nocturnal; during the day; cathemeral (active both during the day and at night); crepuscular (only active at dusk and dawn); and ultradian (active in cycles of several hours). They more or less ignored the last two categories and mapped the remaining three to phylogenetic trees that indicate when the species diverged.

They found evidence to support key predictions of the nocturnal bottleneck hypothesis: First, the most recent common ancestor was in fact nocturnal. And second, the first diurnal mammals appeared in the Cenozoic Era, about 60 million years ago. It seems that mammals first went through a cathemeral phase. And depending on your view of mammalian evolution, the first taxon to develop diurnality was either the most common recent ancestor of all apes and apes, or the most common recent ancestor of all… elephant shrews.

Until gas lamps began to illuminate western cities in the early 1800s, many people took two naps, with breaks for fun activities in between, instead of sleeping through the full eight hours. Thus, modern sleep researchers promoting this segmented sleep may go much further back in our evolutionary history than they realize when encouraging such patterns. With the onset of daylight saving time, we now all have plenty of hours to try it out.