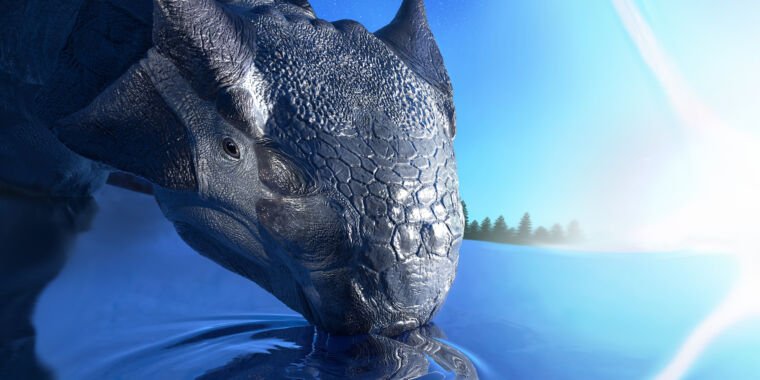 The mass extinction event that ended the Cretaceous Period 66 million years ago has long sparked a lively back and forth debate among geologists. Wild episodes of volcanism tie in with earlier mass extinctions, and the late Cretaceous saw the Deccan Traps eruptions, which covered much of what is now India in lava. The asteroid impact that formed the Chicxulub crater clearly also falls into the “bad things for life” category. But Deccan’s eruptions cannot be ignored, so debates about the relative contributions of these events were inevitable.

In recent years, more accurate dating techniques have made the timing of the eruptions clearer. It’s clear where the asteroid’s impact fits in the timeline, as a layer of dust and soot appears in the rocks around the world, but it was more difficult to capture the eruptions. And the fossil evidence and climate indicators have also left some room for interpretation about the effects of the volcanism.

A new study led by Alessandro Chiarenza at Imperial College London and Alexander Farnsworth at the University of Bristol seeks answers through a slightly different approach: creating a dinosaur habitat model.

To create the climate scenarios for changing habitats, the researchers used a handful of climate model simulations powered by estimates of the eruptions and asteroid impact. This included varying amounts of sulfate aerosols (reduction of incoming sunlight), increase in carbon dioxide, and ash fall on land.

They tried scenarios with volcanic aerosols, ranging from five to twenty percent less sunlight. That would have a huge impact on the temperature and would lead to global cooling from 10°C to 67°C. Simulations of the volcanic CO2 release, meanwhile, produced a warming of 5°C to 9°C. Since the researchers say the paleoclimate evidence seems to point to a warming of about 2°C during the eruptions, even the experiment with a five percent sunlight reduction is likely too extreme.

It is particularly difficult to estimate the volcanic aerosol effect of the eruptions. First, aerosols have to reach the stratosphere to have a chance to hang out for any meaningful amount of time, and it’s simply unknown whether the Deccan eruptions were violent enough to lift them that high. And even then aerosols don’t last long, so steadily bursts would be needed to sustain a certain amount of aerosols.

The asteroid impact simulations, on the other hand, have a fairly unavoidable result – sudden and drastic global cooling – drastic significance near 34°C. The world will start warming in a few years, but it will take decades to reverse. to the pre-impact temperatures.

This is where things get a little more interesting. In simulations with both the volcanic and impact effects, the volcanic CO2 actually causes a slightly faster return to warm temperatures after the asteroid impact — recovery in about 20 years instead of 30 years. So rather than a climatic “double whammy,” the eruptions may have usefully offset some of the freezing temperatures.

To connect this idea to habitats, the researchers started by comparing annual temperature and precipitation ranges with fossil sites in pre-disaster Cretaceous simulations. Using the climates that dinosaurs lived in, the researchers were able to see what the different climate change scenarios would do to the available habitat.

Aside from seemingly improbable volcanic aerosol scenarios, the simulations of volcanic warming are actually increase the area of ​​suitable habitat. In fact, warming is roughly doubling the global habitats of dinosaurs. The asteroid impact simulation, on the other hand, basically erased every place a dinosaur could thrive.

The results also show that the volcanic warming would result in more habitat and faster return after the asteroid.

This study evaluates habitat only in terms of climate – other nasty things were definitely or possibly associated with these events. For example, there were massive tsunamis, undersea landslides, widespread wildfires, and probably not enough sunlight to sustain photosynthesis after the asteroid hit. And the volcanism may have had local toxic effects. But the researchers say that only the climatic effect of the impact seems sufficient for a mass extinction.

The researchers also highlight evidence that appears to point to the asteroid rather than the volcanism. There is some fossil evidence that dinosaur diversity increased during the phase of eruptions that occurred prior to the asteroid’s impact. And in the oceans, the extinctions affected only shallow waters — which makes more sense for a short-lived climatic event than a long-term one in which changes could work their way into the depths. It also helps explain evidence of rapid recovery, such as the return of life to Chicxulub Crater itself.

And this isn’t just some academic argument siding with the asteroid as the dominant cause of the extinction, relegating volcanism to something more like chance. The researchers go so far as to “suggest that Deccan volcanism may have contributed to the survival of many species around the world.” [end-Cretaceous] frontier and possibly aided the rapid recovery of life from the most iconic of mass extinctions.”