Dicey Dungeons review: Well, there goes another 100 hours of my life |Techilink 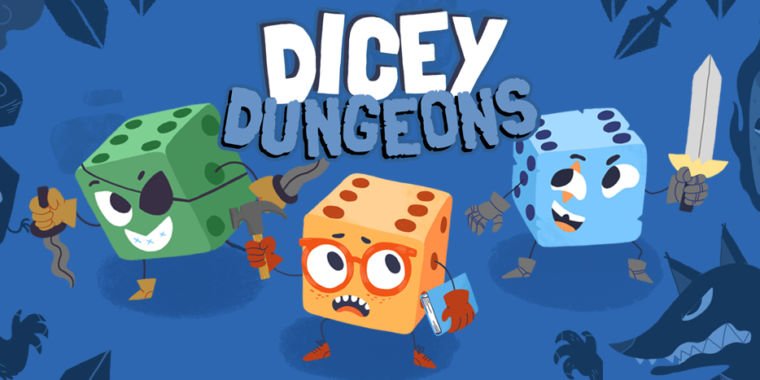 The central premise of Dicey Dungeonsthe new dice roguelike from acclaimed developer Terry Cavanagh (VVVVVV, super hexagon) is that you are a walking, talking dice starring in a twisted game show where you must fight your way endlessly through an ever-changing dungeon in a desperate attempt to earn your freedom. Of course, that freedom will never come.

Aside from the whole “sentient die in a game show” thing, it’s a pretty apt metaphor for my experience with the highly addictive modern roguelike genre (or “roguelite”, depending on how elevated you want to get). I’ve honestly put a disturbing amount of hours into games like The Binding of Isaacc, Dead cellsand Kill the spirethe latter of which you may hear used in descriptions of Dicey Dungeons† It’s not a totally indefensible comparison – they feel the same in some ways – but the games are very different in the end.

Kill the spire combined the board game-famous mechanism of deckbuilding with the “one more run” addiction of a roguelike dungeon crawler to create, in this author’s estimation, a damn near-perfect game. Dicey Dungeons yoinks Kill the spirethe general setup – dragging across a branching map to engage in turn-based, permadeath battles against monsters – but instead of building a deck of cards through play, you assemble a set of “equipment” that you activate with standard six-sided dice.

The game rolls your dice for you at the start of each turn – you start each run with two, but you get more as you level up – and you can then allocate your dice to your gear as you see fit. The starting character, the warrior, starts each game with a sword, which deals damage equal to the numerical value of the die placed on it. The warrior also gains a “combat roll” ability that allows you to re-roll three times (it’s the starting character, after all).

Before long, though, you’ll be picking up more interesting gear, like “Toxic Ooze,” which deals damage equal to the number of dice, but if that number is a 6, you’ll also place a few piles of poison on the enemy. “Boomerang” deals damage equal to twice the die value to the enemy, but then comes back to hit you for damage of one value. Some equipment requires a certain spread of numbers (“less than 5” or “at least 3”), some require you to hit a certain threshold (a 10, of course, requires multiple dice to activate), and some allow you to simply manipulate your dice (raise a die 1, throw it down 1, split it in half, etc.).

The gear boxes are a bit bland unfortunately; it would have been nice to see little thematic illustrations to make a sword feel like a sword instead of a generic box with “sword” written on it.

Each of the game’s six characters (warrior, thief, robot, inventor, witch, and a secret character) has his or her own, completely different selection of starting gear and character-specific gear, as well as a special “limit break” power that can be activated when you take enough damage. The warrior focuses on large, devastating attacks, while the thief has access to small, repeatable attacks. Certain characters even have completely unique mechanics. The robot allows you to roll as many dice as you want, but if you roll over your target number, you “end” your turn immediately (hit the target exactly to trigger a “jackpot” bonus action). The inventor deconstructs a piece of active gear after each battle to give her a special bonus ability for the next battle, and the witch must create a spellbook to use during battle.

Your backpack can hold a generous amount of gear, but your active gear – which you can switch in and out between battles at will – is limited to six slots. Some of the more powerful gear takes up two slots, so you’ll have to constantly reassess which gear will work best together for the particular monster you’re dealing with. The monsters, of course, have their own specialized equipment and fight in the same way.

In a game like Kill the spire, building your deck is half the battle. The “deck building” aspect of Dicey Dungeons– assembling your gear – is important, but it’s the tactical turn-by-turn gameplay that will be most of your thinking. There is a degree of luck inherent in any game of dice, but the randomness here feels about right. There are, of course, times when you just don’t roll a number you need, but there are also plenty of ways to build up your equipment to ensure you have a spread of equipment to make use of each dice result. There are also ways to manipulate the results of the dice, and you can even “cheat” the system to get free dice and perform some complicated maneuvers (if you “split” a 1 you get two 1s, or you can bump up a 6 to get a 6 and an extra 1, etc). Each turn, the game gives you a random assortment of dice and asks you to use them as efficiently as possible.

Contrary to the game’s grim premise, Dicey Dungeon‘s aesthetic can probably best be described as ‘aggressively effervescent’. The genre-standard stark darkness is replaced here by bright colors, quirky characters and a positively popping chiptune soundtrack. Defeated enemies are not left in a pool of their own entrails; they are simply the best for the day, and they send you off with a cute quip. The enemies themselves are unfailingly charming – there’s everything from a flaming marshmallow that shoots fireballs to an allergic porcupine that (perhaps accidentally) throws spines at you when it sneezes.

As for the difficulty, I was quite concerned as I beat my first run of the game and blasted through the character unlock process with very little pushback. It’s the roguelike genre’s persistent dedication to crushing difficulty that gives its games near-endless replayability. But the default game is essentially a tutorial, a way to familiarize yourself with each character’s unique mechanics and equipment. After unlocking all the characters, you’ll unlock ‘Episodes’, where the game really comes together.

There are six episodes for each character – the first is just the standard game and each of the others adds a twist or new mechanic to the character’s repertoire. For example, in a standard Episode 1 game, the thief steals a random piece of equipment every turn. In episode 2, the thief can permanently steal a device by investing dice in it. In episode 3, the thief rolls all 1’s in round one, all 2’s in round two, and so on. The “limit break” characters’ special powers are also different in each episode, and some of the more complex characters get really crazy modifiers to shake things up. When I unlocked the episodes, my enthusiasm for the game went from “yes, this is pretty cool” to “I won’t rest until I finish everything in this game.” Most episodes give you new skills to play with and solve problems, making a character from “Episode 1” and a character from “Episode 2” almost feel like completely different classes. The episodes are also more difficult than the standard game.

Don’t expect the intense theorizing of a more complex game here; there’s no in-depth interplay between cards, trinkets, consumables, and other mechanics like you’d see in Kill the spire† But Dicey Dungeons does what it sets out to do: offers an approachable roguelike strategy game – certainly a much smoother ramp than many of its genre counterparts.

Most importantly, it’s a lot of fun. Again, I’m stuck in the dungeon.