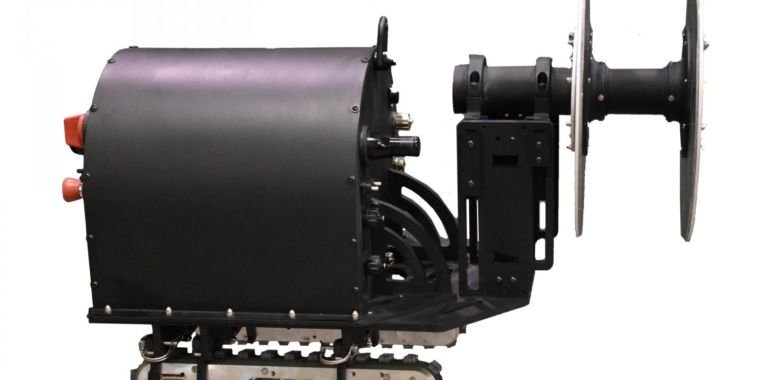 A government facility in Piketon, Ohio produced enriched uranium for both energy and weapons grades between 1954 and 2001. Several years ago, the Department of Energy (DOE) and an outside contractor, Fluor-BWXT, began decommissioning the plant.

But now a new set of “hands” is deployed to speed up the work. Well, not exactly hands, but a radiation sensor and some flexible rails. A tiny pipe-crawling robot called RadPiper will be unleashed into 15 of the 75 miles of pipes once used to make enriched uranium through a gas diffusion process.

According to a press release from Carnegie Mellon, radiation measurements should be taken at each one-foot segment of pipe to rule out the possibility of potentially dangerous amounts of uranium-235 remaining in the pipes. If RadPiper detects a hazardous pipe section, it must be removed and decontaminated. Clean pipes can remain and are demolished together with the rest of the building.

Fluor-BWXT has already retired one of three process warehouses at the Ohio site, which contain a total of 75 miles of piping. The initial demolition of the process warehouse took the company three years to complete, not least because people (wearing protective gear) had to measure every foot-long segment of the pipes for elevated levels of uranium-235 from the outside of the pipes. The people took 1.4 million measurements to thoroughly assess the first process warehouse. RadPiper should significantly speed up the process and reduce potentially harmful exposure to humans. Another advantage: RadPiper’s measurements are more accurate because they are taken from inside the pipes.

The university is seeking a patent for the sensor on top of RadPiper, which uses a sodium iodide sensor to count gamma rays and two disc-shaped blinders that will prevent the sensor from measuring radiation outside the length of pipe the bone is measuring. .

RadPiper was funded with $1.4 million from the DOE, which worked closely with Carnegie Mellon University and Fluor-BWXT to build and test a prototype on a rapid turnaround schedule. Now, the DOE expects RadPiper to save labor costs at an eight-to-one ratio.

“DOE officials estimate the robots could save tens of millions of dollars in completing uranium deposit characterization at the Portsmouth Gaseous Diffusion Plant in Piketon, and save perhaps $50 million at a similar uranium enrichment plant in Paducah, Kentucky,” wrote Carnegie Mellon.

RadPiper and a second robot of the same name can crawl through 30- and 42-inch diameter pipes to take its measurements. In some parts of the pipes, measurements from outside the pipes will still have to be carried out. But this little robot is equipped with a fisheye lens and a lidar sensor to corner and identify obstacles in the pipe ahead. “After completing a pipeline, the robot automatically returns to its starting point,” said Carnegie Mellon.