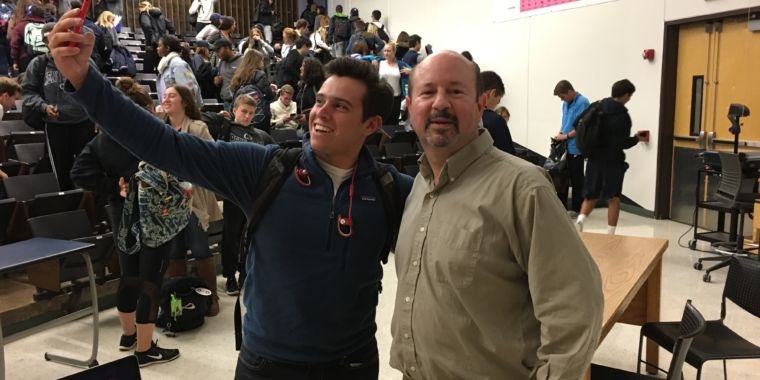 Several years ago, some conservative columnists wrote pieces accusing a prominent climate researcher of fraudulently manipulating data, phrasing it in a way that drew comparisons to a convicted child molester. The investigator demanded that the columns be removed; when the publishers refused, he turned to court. His suit, filed in the Superior Court of the District of Columbia, has been kicking off ever since, as motions to dismiss it eventually languished amid more filings and appeals.

Meanwhile, events seem to have caught up with the case. With no facts to back them up and ample evidence to the contrary, the columns in question now seem to fit the definition of what we now call “fake news.” And, just in time to be relevant, the appeals court has weighed in by ruling that the case should go to trial and indicating that the climate scientist has a good chance of winning there.

This is the research of Penn State’s Mike Mann, who specializes in reconstructing global temperature records from periods before thermometers were available. His initial work showed a long period of relatively mild variations, followed by a sudden, sharp rise in temperature over the past century. The resulting chart was nicknamed the “hockey stick” and has been the subject of debate since its release. Mann has become a leading advocate for action on climate change and regularly writes books and columns aimed at a popular audience.

He was also swept up in the controversy when an archive of emails was stolen in a hack of a research institution in the UK. Although he did not work there, Mann was involved in exchanges with a number of researchers who did. As a result of his investigation and these emails, Mann has been the subject of multiple investigations over the years, none of which have turned up any evidence of wrongdoing. Follow-up research has also validated the results of the hockey stick work.

For a few columnists from the Competitive Enterprise Institute and the National review, Mann had to be wrong. So if an investigation had cleared him, it couldn’t have been a thorough investigation. This forms the backdrop for their columns, which drew comparisons between Mann’s investigations and those of another Penn State employee, Jerry Sandusky, a former coach convicted of molesting children in a charity program. In colorful language, they called the Mann investigation money laundering and accused him of “molesting” data. Mann demanded that the columns be removed or he would sue, and continued with this threat.

The Defendants – Rand Simberg of IEC, the NRs Mark Steyn and his editor, Rich Lowry, sought to have the lawsuit dismissed under the District of Columbia’s SLAPP statute. Anti-SLAPP (for “strategic lawsuit against public participation”) legislation, passed by a number of states, is designed to give people an easy legal remedy if someone tries to silence them through frivolous lawsuits. If the lawsuit is unlikely to succeed, the judge can simply dismiss it. Often, the statutes require a losing SLAPP plaintiff to pay a defendant’s legal fees. The initial judge refused to dismiss Mann’s case, but since then there has been a change of judges, a revised filing of the lawsuit by Mann, and two attempts to appeal the defendants’ decision.

All this brings us to the recent appeals court ruling, which was released just before the holidays.

Large parts of the decision are devoted to legal issues, such as whether the court’s decision in Mann’s favor can even be appealed. The three-judge panel decided it could and resolved several details of the District of Columbia’s SLAPP statue. And then it was about whether the case should be dismissed.

That depends on whether or not Mann will prevail at trial. When it comes to Lowry, who wrote an editorial encouraging Mann to sue, the judges decided he wasn’t. The editorial simply describes the claims of scientific fraud found in the previous columns, rather than making new, defamatory claims. All of the defendants are off the hook when it comes to inflicting emotional distress, as Mann has provided no evidence that he experienced any.

The libel claims against Simberg and Steyn remain. Here the authors’ tendency to treat their own views as fact caused them problems. “[The] argument is that the statements are not demonstrably false because they are simply Mr. Simberg’s opinion,” the court says, before further noting that “Mr. convey, such as ‘in my opinion’ or ‘in my opinion’ or ‘I think’. The article’s allegations about Dr. Mann are stated objectively, as being “shown and “revealed by the CRU emails.”

And it’s not just Simberg who gets into trouble here. “As with Mr. Simberg’s article,” the court writes, “Mr. Steyn’s is not about the merits of the science of global warming, but about Dr. Mann’s ‘deception’ and ‘misconduct’. ‘ no detailed critique of Mann’s work that would allow a reader to reach an independent conclusion as to its validity.

The court thus concludes that allegations of Mann’s misconduct in these columns are statements of fact. In this case, they would be protected if they were right. But the court has concluded that it probably isn’t. While Simberg and Steyn felt the Penn State investigation of Mann was a sham, they again gave no reason to believe so. The court, on the other hand, was impressed by the investigative body there, which even named all its members and their credentials.

“Even if the defendants’ skepticism about the Penn State report were recognized by a jury as a valid reason not to take its conclusions seriously,” the court continues, “that leaves three other reports, from separate investigative bodies in academia and government, on both sides of the Atlantic, found no offense either.” It also notes that there have been a total of seven investigations that found no wrongdoing, that Mann’s scientific conclusions were accepted by a National Academies of Science panel that investigated the cases, and that the results have since been validated by additional research.

“We are struck by the number, scale and specificity of the investigations, and by the composition of the investigative bodies,” the decision concludes. “We think a jury would conclude that they shouldn’t just be fired.”

Therefore, the court recommends that the case go to trial so that documents and testimony can help reveal whether the columns were facts or opinions and, as the former, whether the defendants acted with reckless disregard for the truth.

Reviewing the matter several years later, it’s hard not to be struck by the parallels between these columns and the outbreak of fake news that occurred during the presidential campaign. Many news organizations got together with the ACLU to file an amicus brief in favor of Simberg and Steyn earlier in the legal process. Those organizations argued in part that the statements made in these columns were clearly opinions, suggesting that the writers are in danger of being punished for suggesting that Mann’s work is scientifically invalid.

While those interpretations of the pieces are open to debate, that presentation avoids all the problems the columns have in common with fake news: the columnists’ desired conclusions were stated as facts, although no evidence was provided to support them, and all available evidence indicates that the statements were false. It is likely that many of the organizations involved in the assignment agree that the increase in fake news is a significant problem. But what is not clear at this point is whether they want the courts as allies in their fight against it.

Correction: Mr. Sandusky’s victims were misidentified in the original piece.