Decrypted: The Expanse: “The truth is never what you expect it to be” |Techilink 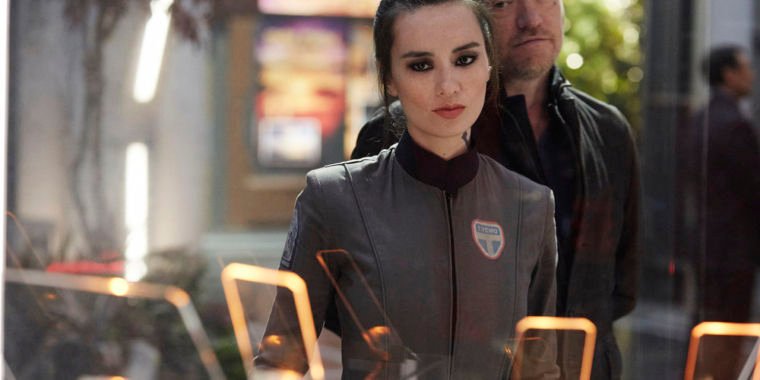 Welcome to week six of Decoded: The Expanse. This week’s episode started off with a rather calm-looking scene of red snowflakes nestling in the weak gravity of one of Jupiter’s moons. But appearances are deceiving; that “snow” is actually a fine jet of blood leaking from Bobbie Draper’s power armor. With one of Ganymede’s orbital mirrors out of order and heavy damage to some of the domes, the outer planets granary is in serious trouble. But here’s a question for the scientists: Would a fine jet of blood really form tiny red snowflakes in the cold vacuum of space?

Draper is all that remains of her team and the only surviving eyewitness to the battle on Ganymede. Using memory-enhancing drugs, she can reconstruct the sequence of events, but the Martians don’t seem interested in hearing about the seventh man she saw before she passed out.

On Earth, Errinwright still spoils for a battle with Mars, but Avasarala has the upper hand. Instead of a war in the entire solar system, she proposes a peace conference. The crew of the Roci help with refugees at Tycho Station, but Amos is upset when he realizes the rest of the crew has something he can’t find: a sense of empathy. He goes in search of Cortazar, the Protogen scientist, who gives him a psychopathic pep talk.

Meanwhile, it becomes clear that the OPA is being torn apart by factions and various agendas. Fred Johnson wants peace, but Anderson Dawes has none of it, cannot let go of his deep-seated distrust of the inner planets. Dawes uses the fact that Johnson and Holden were both born on Earth quite effectively to discredit them in the eyes of the other Belters.

We’re certainly not complaining that Dawes is getting a lot of screen time this week. Jared Harris (who plays the character) continues to surprise us with his heavy Belter accent and political machinations. That makes this week’s guest a fitting one. This week we are joined by Nick Farmer, the linguist responsible for Belter Creole. Nick and I discuss the show, the evolution of new languages, his favorite words in belter, and yes, we’re even talking about Klingon.

I’m going to analyze, debate and dissect the vastness each week with a different guest, and throughout the season we post the podcast on Fridays. New episodes air on Wednesdays in the US, so you have time to watch before we get into major spoilers. the vastness season 2 will air in the UK on Netflix, although possibly not for another month or two.

decoded is Ars Technica’s weekly podcast about the TV that obsesses us. We are currently dissecting the vastness. Listen or subscribe as you wish above and let us know what you think – ideas, questions, etc – via the comments section, on iTunes or via email