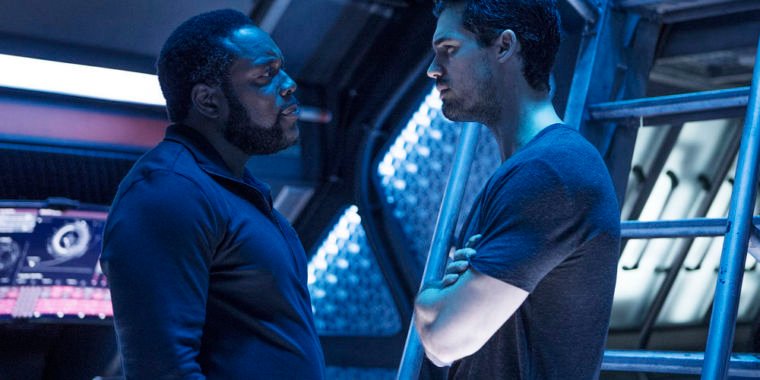 It was definitely a busy week the vastness. For starters, we learned the story of Solomon Epstein, the equivalent of Zephram Cochrane in this universe. The needs of the story will always trump scientific rigor, and the Epstein drive solves two big problems for the show. First, it shortens transit times around the solar system. And second, it’s a handy way to add gravity. The show takes place over at least two hundred years; that’s distant enough that it’s reasonable to suggest propulsion breakthroughs that now seem like magic to us.

Holden remains charmingly naive. Why wouldn’t Fred Johnson want 30 planet busters? And why would he think there were no more samples of the protomolecule left? I hope everyone noticed that Naomi was running a simulation instead of shooting their monster into the sun.

Then there is the Venus situation. We saw Chrisjen Avasarala for the badass she really is, but Earth has plans for war with Mars, not aliens. A war that Bobbie Draper is only too happy to bring to the Earthers.

In this week’s podcast, I’m joined by Ars science editor John Timmer. We discuss a certain science fiction trope he can’t stand and recap the latest happenings. We also have an interview with Dominique Tipper, the actor who plays Naomi Nagata.

I’m going to analyze, debate and dissect the vastness each week with a different guest, and throughout the season we post the podcast on Fridays. New episodes air on Wednesdays in the US, so you have time to watch before we get into major spoilers. the vastness season 2 will air in the UK on Netflix, although possibly not for another month or two.

decoded is Ars Technica’s weekly podcast about the TV that obsesses us. We are currently dissecting the vastness. Listen or subscribe as you like above, and let us know what you think — ideas, questions, and so on — via the comments section, on iTunes, or via email.