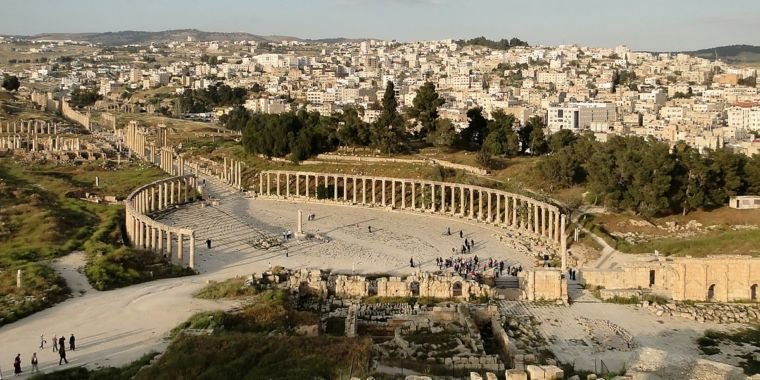 Combining old and new aerial images, archaeologists are opening up a new perspective on the complexities of supplying water to an ancient desert city.

In northern Jordan, along a wadi once called the Golden River, the ancient city of Jerash sits uncomfortably next to its modern namesake. With its columned temples, Roman forum and other monuments, it is one of Jordan’s greatest tourist attractions and a key to the region’s long, complex history. But the expansion of modern Jerash is slowly destroying what remains of the ancient city.

Recently, a team of archaeologists from the University of Aarhus and the University of Münster combined historic aerial photographs with modern, laser scanning to map those changes and get a big picture of the old city. Earlier archaeological work in Jerash has focused on individual sites or monumental architecture rather than more subtle or mundane aspects of urban life, even if the latter kept residents alive. By comparing modern laser scans with aerial photographs from the last century, the researchers were able to identify what was lost, discover which sites are most at risk and make connections between features that may have been much harder to spot from the ground.

Jerash was an important settlement by the time Rome conquered the land around it in 63 BCE. Under the Roman Empire, it grew into a thriving urban center, with nearly 4 miles of walls enclosing a colonnaded city and large public monuments. Under the Byzantine Empire and then the Umayyad Empire, the city’s population continued to grow.

Jerash was at its peak in January 749 CE when a massive earthquake devastated the region. Most of the survivors left Jerash and only a few buildings were rebuilt during the Middle Ages. By the early 1800s, travelers traveling through the ruined city reported that a few nomadic Bedouins had camped among the ruins, but few people still lived there permanently.

But in the late 1800s, the Ottoman Empire started a new settlement in Jerash, mostly on the eastern bank of the wadi, on top of the old remains of that half of the city. The population started to swell again in the late 20th century, when two Palestinian refugee camps close to the city took shape and grew into small towns in their own right.

Today, the city is home to more than 50,000 people, with nearly another 50,000 living nearby in the camps. As in many Middle Eastern cities, the growing modern urban population lives shoulder to shoulder with the ancient past – and when people start competing for space, the living tend to win. Archaeologists often race against urban growth to preserve the region’s cultural heritage.

The investigation revealed how complex the city’s long history was, and that people have been burying the old under the new here for centuries. A wall-like structure bisects the Roman hippodrome, where the city’s ancient inhabitants once gathered to watch horse and chariot races. Archaeologists have debated the purpose of the division for years. But when Stott and his colleagues zoomed out to look at the aerial photos, they were able to link the structure to a canal that supplies water to fields in the city’s southwest.

And the canal, according to the archaeologists, was built long after the hippodrome was transformed into an industrial building under the Byzantine Empire and then as a burial place under the Umayyads. It seems to have been built on top of all history.

“It shows how deep and complex the history of the city is,” Stott told Ars.

The water must flow

The study also revealed the complexity of the ancient city’s water system. The only permanent source within the ancient city walls, Ain Kerawan, is located in the wadi bed, where water could not reach the higher parts of the city in the days before mechanical pumps. This meant that the survival of the city depended on water supplied from further up in the wadi or from springs in the surrounding hills, requiring a complex network of reservoirs, aqueducts, siphons and canals drawn by hand. the local rock had been hewn.

“People need to understand how complex and advanced the engineering behind Roman water management systems was to support a city of this size, and what an feat of ingenuity and hard work it represents,” Stott told Ars.

Archaeologists had already studied several important pieces of ancient urban infrastructure here, such as the two large rock reservoirs that once supplied the city’s densely populated northwestern quarter. One of them was hewn out of the rock in the 2nd century CE and repaired sometime in the 5th or 6th century CE, according to earlier excavations. And some of that old infrastructure is still in use.

“A number of canals from the Ottoman period are still in use to irrigate the fields in the valley below the city,” Stott told Ars. “The Roman reservoir at Birketein in the north of the city is used by locals for swimming when water is available.”

The aerial photos allowed Stott and his colleagues to make connections between the cisterns and various fragments of ancient aqueducts that ran from higher up in the hills into the city, helping them better understand how the whole system worked together. “An important aspect of this work is collecting all map information in a GIS [geographic information system] so that we can analyze different aspects of the water management system and the urban fabric together,” said Stott.

The spring that filled the Birketein reservoir, where modern residents swim, is said to have supplied about a quarter of the ancient city with water from the wadi upstream. This water flowed into the city through a network of canals cut into the western slope of the valley. But those canals only reached the lower areas of the western city. The higher elevations, which were also more densely populated, relied on aqueducts to transport water from springs much higher in the hills.

When Stott and his colleagues looked at the aerial photos, they discovered fragments of another aqueduct flowing into the city’s southwest quarter, which likely provided a rock reservoir there. From above, it appears to have some unusual features that could be the remains of a mechanism called an “inverted siphon,” a pipe for passing water under an obstruction such as a valley or riverbed.

“The discovery of an inverted siphon in Jerash would be exciting, and it would add to our understanding of the city’s water supply, demonstrating that it was just as advanced as it was in other Roman cities in the empire,” Stott told Ars.

Lessons for a changing climate

The really interesting part of the story, of course, is how the city’s water supply changed over time as the urban population grew or as the region’s climate fluctuated from arid to relatively wet. How past societies adapted – or did not adapt – could provide practical lessons for modern cities faced with the realities of climate change.

“Jerash was a thriving urban center, but at some point it stopped thriving and could no longer function as a city. Infrastructure damage, for example caused by the devastating earthquake in 749 CE, and long-term processes such as a drier climate, disease, and changing political and economic conditions have all likely contributed to this,” Stott told Ars. perspectives on whether our modern cities can withstand the same pressures.”

However, to piece together the details of that story will require archaeological work on site. It’s difficult to establish dates, or even a build sequence, on ancient structures based on aerial imagery alone (the aqueduct that runs through the hippodrome is a notable exception). But Stott and his colleagues say their research could help identify the best targets for future investigations, remote sensing and excavations in Jerash, and help provide greater context for finds on the ground.