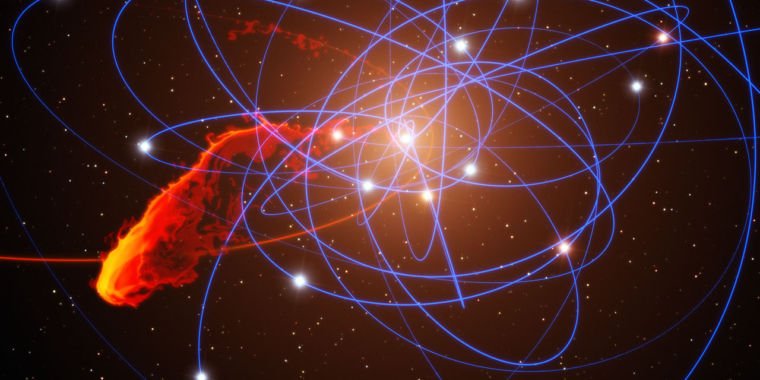 Testing general relativity is a fraught business. The theory has proven to be so robust that anyone who thinks it’s wrong has been beaten by reality in a pretty serious way. The tests we apply are also limited by our environment, in that we can only look at gravity with precision where it is rather weak: in the laboratory or by tracking the movement of planets. That’s a whole range of scales and powers, but it doesn’t cover where it really matters, which is right next to a black hole.

Observing orbits around a black hole would require a career of measurements and, frankly, who has the time? It’s also a rare benefactor funding a few decades of telescope time. Fortunately, telescopes have been collecting data for a while now, and some of it includes the vicinity of some black holes. Recently, some scientists decided to dig up the data and test the general theory of relativity near a supermassive black hole.

Watch out for the black hole

At the center of our galaxy is a black hole, which, like the rabbit of Caerban, savagely devours unwary wanderers. Nevertheless, there are a few reckless stars that are near the rabbit black hole. These stars have orbits of only a few decades and they experience quite large gravitational forces. So astronomers expect that accurate observations of these stars can detect deviations from general relativity.

Fortunately, the Keck telescopes have been collecting data from the sky for about 25 years, during which time they’ve turned their unblinking eyes to the galactic center on numerous occasions. Each time, the observations were conducted a little differently. For example, in 2005 the telescopes were upgraded with adaptive optics and some observations focused on acquiring spectral data rather than imaging. The latter data contains orbital velocity data, because the motion of the star causes a Doppler shift in the observed colors of light.

All this data was combined in a consistent way to map the orbital positions and velocities of two stars. This is quite an achievement, because for each observation the telescope points in a slightly different direction, with different exposure times, and taking into account other small differences. While other telescopes also have data available, the public records were not detailed enough to allow the scientists to process the data in a consistent manner. That’s a pity, because the dataset consists of about 100 observations from these two telescopes alone. Imagine what would have been obtained if more telescopes had accessible data?

What have we learned after all this? General relativity is still right and accurately predicted stellar motion. These measurements tested general relativity in a way unlike any that had come before — in fields of high gravity over long periods of time. In particular, the new measurements helped set limits on extensions of general relativity that follow a kind of modified Newtonian dynamics model. In these models, there is a distance at which a new force becomes apparent, and that force has an unknown characteristic force. So astronomers look for a consistent distance at which there is a noticeable deviation from the predictions. However, the measurements tell us that for any distance relevant to the orbit of these stars, a new force would have zero force.

Or rather, a new force would have a force so small that we cannot yet measure it. Conclusion: general relativity wins again.

Normally I read these kinds of articles with interest, but I rarely report on them. The problem isn’t that the researchers found nothing; often they found nothing, but only in a way that is slightly more sensitive than their previous paper. But this article represents more than a test – it really is the start of something new.

One of the themes emerging in scientific research is open data. Science has always generated more data than it can handle. In the past, most data was collected in physical objects: think astronomical plates, X-rays, electron microscope images, and many other types of collections.

These were all stored in filing cabinets around the world. The data in images has been used once or twice and, unless the images were spectacular, forgotten. It took luck – and a damn good memory – to recognize that there were connections between data from disparate projects, hidden in multiple old datasets. Even if you could recognize it, you had to get all the data in one place to respond to that connection. Simply put, good science was limited by poor data accessibility. It was even easier to just do new experiments.

In addition, most previous experiments, with a few exceptions, had to be limited in scope because each scientist only had one lifetime to collect data.

Now we are instead reaping the benefits of a revolution. There are experiments, like the last few generations of particle accelerators, that create data so quickly that no team of scientists, no matter how dedicated or large, can hope to analyze everything. And there are facilities that generate data for one purpose, but that can use data in innovative ways to provide new insights in other areas. Mining all this information is very important for very slow processes, where the data accumulates over time periods that span generations, such as climate change and now orbital mechanics.

The particle physics community has been at the forefront of figuring out how to deal with this: Data from the LHC and from its predecessors – the LEP and Tevatron – have long been available to researchers around the world. It is common for theorists to sift through the data to see if they can find any hope for their latest fantasies. Climate scientists have created databases that allow anyone to test models and analyze trends. The results are, for particle physics, a standard model that resists fantasy, and climate models that are repeatedly tested against reality.

This quiet revolution is spreading to every branch of science, but we are only at the beginning of what might be hidden in the vast amounts of digitized data. Scientists can now imagine conducting experiments that a decade ago might have taken an entire career of observations for one data point. Today, the data may already exist and, more importantly, be accessible. In this regard, the open data movement is probably one of the most important recent developments in science.

In astronomy, the number of eyes directed to the sky is increasing. The sensitivity of those eyes is getting better and better. Once the sightings are documented consistently, we have a wealth of data for future generations. We will be able to test our theories about the universe with great precision. I look forward.