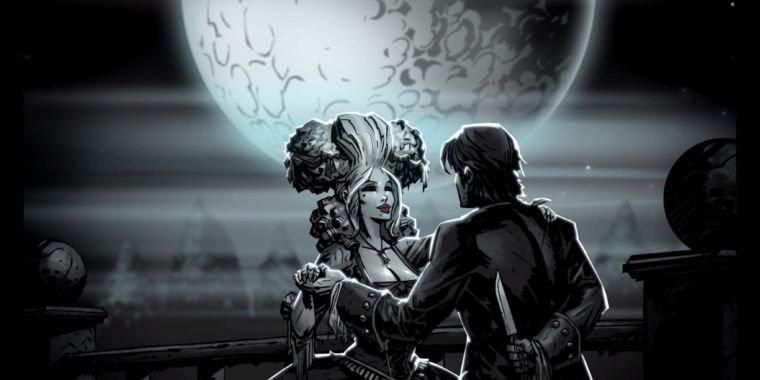 darkest dungeonthe very first DLC, The Crimson Court, will be difficult to sell for many players. That’s not just a pun on the extreme difficulty of the expansion, either, though there’s plenty of it here.

For those new to the game – and maybe watching The Crimson Court as an excuse to jump aboard the crazy train –darkest dungeon is a brutal turn-based dungeon crawler. In-game time passes as you send rumpled squads into the depths of various dungeons. Managing time, resources and a revolving door of adventurers is a delicate balance that players either learn to walk or bow all the way to.

The Crimson Court DLC doesn’t stand alone, which is the expansion’s first structural hurdle. You either have to start a new campaign or use an existing save where you don’t mind turning that balance inside out with new enemies, objectives and dangers.

That was a pretty big request for me. I have some friends who have been more than happy to play darkest dungeon completed several times since it left Early Access in 2016. I’m not like them. I was thrilled to beat the grueling game once and walk away. So when I learned that The Crimson Court‘s addition was more extension then extensionI was afraid I wouldn’t have the guts to commit to the game all over again.

Maybe I’m more like my friends than I thought. Either that or the new vampire-centric Crimson Court is just as seductive. Probably both.

Hail all the new flesh and blood

That does not mean Crimson Court is inviting. The expansion’s new horror kicks off in week five of a regular darkest dungeon campaign, after which the Hamlet – your home away from horror – is infested by mosquitoes. These literal and figurative buggers put a dent in how much stress your returning spelunkers get back in town every week. In a game where too much stress can cause your party members to go in at the deep end, that’s a very frustrating development.

The solution is to enter the aptly named courtyard to burn out the mosquito nests in it. This new zone includes most of the new content specific to The Crimson Court. Of course you want to dive right in: both to reduce the pressure on your employees and to see the new stuff. However, I recommend waiting. Once you open the seal in the courtyard, new and potentially devastating enemies will pop up in every randomly generated level of the game.

That wouldn’t be a enormous problem, but these new tick- and mosquito-inspired enemies can infect your party members with the so-called Crimson Curse. You’ll end up spending one lot of time and energy to manage the Crimson Curse, a change that fundamentally changes the way you think darkest dungeon.

The curse is usually bad. It lowers a given dungeon’s resistance to just about any negative status effect, decreases their maximum hit points, and increases the chance of them going haywire if the stress gets too high. As if that weren’t enough, the curse gets worse and worse over time, until the infected adventurer croaks completely. And cursed allies also have a chance to infect their companions in the Hamlet.

You can only soften the curse with the proper application of The Blood, a new resource that falls randomly from enemies. this actually buffs your cursed units for a time. Unfortunately, it also adds a random chance that they will panic and take negative actions, just like they would if they had had a stress breakdown.

Fortunately, you can cure the curse. But early in the campaign, healing is only possible by completing missions in the courtyard… another random enemy-dropped resource called Invitations.

Crimson Court‘s new enemies, zone, bosses and hero class (a crossing support class and frontliner called the Flagellant, aimed at making enemies bleed) are a huge breath of fresh air. darkest dungeon gets a lot of (somewhat deserved) guff for overloading the same few areas to support a very long game. The Crimson Court almost sabotages its best feature – more room to play in and around – by extending play time by relying on forced loot drops. Basically, a very grindy game got bigger to make the grind less noticeable, but it added more and different grinds.

The grind is good! The RNG is bad!

I am confused. I have a pretty high tolerance for grinding in games, which goes as far as valuation in the right circumstances. Vanilla darkest dungeon lived up to those conditions better than almost any game I’ve ever played. Much of the game is about taking short-term risks and mitigating those risks in the long run with better gear, soldiers, upgrades, and knowledge. The Crimson Court responds perfectly to that risk/reward structure.

But even if the game needs a bit of grinding to work – to turn those hordes of disposable units into a few shiny diamonds – the grinding itself shouldn’t be completely random. Far from. darkest dungeon succeeds largely because at some point you know what kind of danger you throw your resources into and what kind of rewards await you. Missions warn you in advance how long and difficult they will be, what kind of enemies you will face and if there is a boss waiting for you at the end.

Crimson Court‘s totally random drops on necessary items, such as The Blood and Invitations required to enter the courtyard, slightly upset the balance between solidity and fairness.

Fortunately, the developers at Red Hook have proven to be extremely receptive to rebalancing. In reality, The Crimson Court fell next to a enormous update that changed many existing heroes, added all-new building mechanics in the Hamlet, and changed the whole experience in general. Since its release, Red Hook has increased the drop rates on The Blood several times.

darkest dungeon has never been a stranger to change. I am confident that with enough time and adjustments, Red Hook will get its reconfigured brew exactly right again. In the meantime, however, The Crimson Court is still a horrifying, tantalizing infusion for the game. It was enough to drive me mad again after I thought I was free. And I’m very excited to see what comes next.