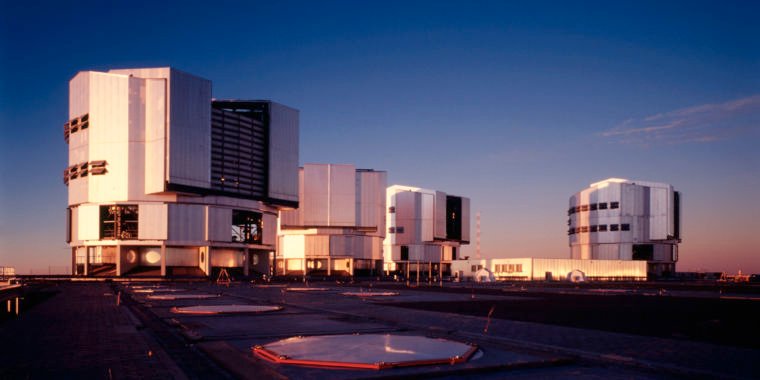 One of the earliest clues to the existence of dark matter came from a study of the rotation of nearby galaxies. The study showed that stars revolve around the galaxy at speeds that indicate there is more mass than the visible matter would indicate. Now researchers have taken this analysis back in time to a period when the Universe was only a few billion years old, and the ancestors of today’s large galaxies were forming stars at a rapid rate.

Oddly enough, the researchers find no need for dark matter to explain the rotation of these early galaxies. While there are a number of plausible explanations for the absence of dark matter at this early stage of galaxy formation, this suggests that our models of the early Universe could use some refinement.

The measurements at issue here are the so-called ‘galaxy rotation curves’. These curves track the speed at which stars rotate as a function of their distance from the center of the galaxy. If ordinary matter were all that was present, it would be easy to predict what we would see. Close to the center of the galaxy, stars would feel only part of the total galactic mass, so they would orbit Earth at a relatively leisurely speed. Any faster, and their orbits would shift outward.

Rotations would gradually speed up as you move outward and feel more of the galaxy’s full mass, peaking before decreasing again. That decrease occurs because the influence of gravity fades with distance. Too far away, and stars feel so little gravity that higher speeds would cause them to fly completely out of the galaxy.

However, measuring nearby galaxies showed that this was not the case at all. The corners rose as you would expect, but did not fall again. Instead, after increasing slightly, the velocities of the stars remained stable far into the galactic hinterland.

One explanation is that the visible matter in a galaxy occupies a small portion of the total galactic disk. The rest is filled by dark matter, which extends much further. The gravitational influence of the dark matter explains why stars don’t slow down at what appear to be the outer edges of the galaxy – the outer edges are actually much further away; they are just not visible. The influence of dark matter has since also been observed in other cosmic phenomena, reinforcing its existence.

In fact, dark matter is thought to have catalyzed the formation of most galaxies. Simulations suggest that gravity pulls dark matter into a web of filaments and that galaxy formation primarily occurs where these filaments converge. This explains why most of the galaxies we see today exist in clusters. Given this model, it is easy to assume that the condensation of dark matter into galactic disks preceded or paralleled the production of the visible part of the galaxies.

The new data would suggest otherwise. The authors used existing survey data to identify six large early galaxies that do not appear to have merged recently and have an abundance of stars. They are considered the progenitors of galaxies like ours and are already large enough to show a clean rotational curve. Their rotation was then measured using the red and blue shifts of light emitted by hydrogen, based on observations made with the Very Large Telescope.

These rotation curves showed something unexpected: instead of staying steady, the speeds decreased rapidly as the measurements moved further away from the centers of the galaxies. In fact, the curves looked a lot like what you’d expect based on the description above, if no dark matter was around. Comparisons with models of galaxy behavior confirmed and quantified this idea: the curves could be reproduced using models with a minimal dark matter component.

The authors checked a number of alternative explanations, such as the influence of gravity from nearby galaxies or orbiting dwarf galaxies, but neither proved to be a major factor. The decrease in rotational speed was also symmetrical around the galaxy, which seems to rule out local influences. When the authors added local (and thus more current) galaxies to the analysis, the analysis showed that the fraction of dark matter in galaxies seems to decrease as you go further back in time.

It might be tempting to see all this as a problem for the idea of ​​dark matter. But it’s worth noting that the primary alternatives to dark matter, modified versions of gravity, wouldn’t explain the situation either, since they suggest that gravity changes over distance, but not over time.

The authors of the new paper see a number of possible explanations. One is that the early galaxies are very gas rich and these gas clouds can experience local instabilities or collisions. This could cause the regular matter in the inner galaxy to condense, resulting in a normal matter-dominated part of the galaxy. The other possibility is that dark matter, rather than forming the seeds of galaxies, begins rather diffusely and takes time to form a disc-like structure that mirrors that of the visible galaxy. Any of these would explain the apparent dominance of matter.

What about the simulations that show galaxies forming at the intersection of dark matter filaments? The authors looked at these and found that they typically don’t have the resolution needed to show what’s happening in individual galaxies. So while these regions appear rich in dark matter, they can’t tell us if that dark matter is condensing into disks as galaxies begin to form.

All this should be an invitation to the modelers to go for higher resolution simulations so that we can get some explanations for these dark matter-poor galaxies.