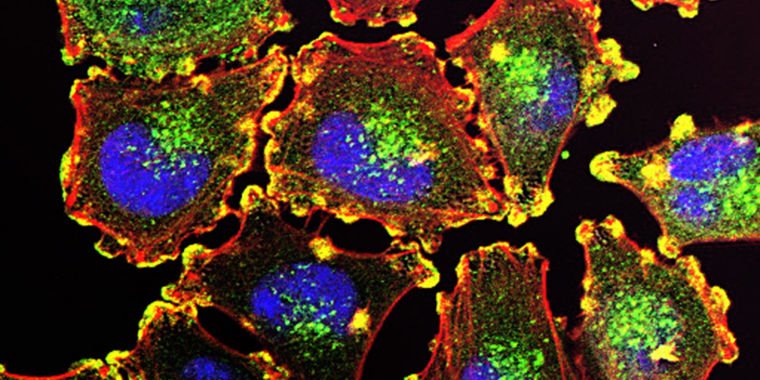 With quick shots in the arm, doctors safely and effectively prepare our immune systems to fight deadly infectious diseases. Now, fingers crossed, they plan to do the same for cancers.

The results of the two studies, both published this week in Nature, follow years of basic research and animal studies on this strategy. Researchers are optimistic, but there are major hurdles to these small trials, including larger trials with more patients and controls. If that goes well, researchers will likely have to figure out how to streamline making vaccines for individual patients, which is currently tedious and expensive.

“The two studies confirm the potential of this type of approach,” wrote Cornelis Melief, a cancer immunologist at Leiden University Medical Center in the Netherlands, in an accompanying commentary. “Controlled, randomized phase II clinical trials with more participants are now needed to establish the efficacy of these vaccines in patients with any type of cancer.”

Researchers have worked for decades to enable our immune system to fight harmful cancers. Immune cells are naturally equipped to do it; they just need a little push. For example, some current cancer immunotherapies work by simply knocking out proteins that cancer cells use to hide from immune responses. The binding of these proteins, such as PD-1 and PD-L1, signals T cells to retreat, as if you were using a Jedi trick – these are not the cancer cells you are looking for. By disrupting these proteins, the immunotherapies enable T cells to stay on task and attack cancer itself.

But that doesn’t always work; sometimes T cells are still not motivated to attack, even if they have not been tricked. Another strategy is for doctors to collect T cells from a patient, genetically engineer the cells in the lab to make sure they identify and fight cancers, and then put them back into the patient. This method has proven highly effective in eradicating cancers in human trials – with the narrow caveat that it occasionally kills patients by inducing an extreme whole-body immune response.

As researchers and biotech startups work feverishly to make that strategy less lethal, the vaccine method could provide a safer middle ground.

Both new studies used the same basic protocol: Researchers sequenced genes in the healthy cells and tumor cells of patients with melanoma, a type of skin cancer. They then identified unique mutations that have accumulated in the patients’ cancer cells but are absent from their healthy cells. After searching to find mutant proteins most likely to trigger an immune response — called “neoantigens” — the researchers created mutation-based vaccines. When pieces of these mutated proteins are presented to T cells by other immune cells, the T cells are trained to hunt down the mutant proteins and destroy the cancer cells that carry them.

In the first trial, led by Dr. Catherine Wu of the Dana-Farber Cancer Institute in Boston, researchers synthesized cocktails of long peptides representing up to 20 neoantigens specific to each patient’s tumors. Six patients received five vaccinations in one month, then boosters at 12 and 20 weeks. Four started the trial with melanoma that had already spread to their lymph nodes (stage IIIB/C). After two years, all four showed no signs of cancer recurrence. The remaining two started with melanoma that had spread to their lungs (stage IVM1b). Both had a recurrence within the first year, but with follow-up treatment of an anti-PD-1 immunotherapy, they both became cancer-free.

In the second trial, led by Dr. Ugur Sahin of Biopharmaceutical New Technologies (BioNTech) Corporation in Mainz, Germany, researchers vaccinated 13 patients with stage III or IV melanoma. For their vaccines, the researchers used RNA fragments representing up to 10 neoantigens. In this case, immune cells can take up the RNA and make peptide fragments to present to T cells. Of the 13 patients, eight were cancer-free during the follow-up period of 12 to 23 months. The other five all relapsed, but one became cancer-free after anti-PD-1 immunotherapy.

In both studies, researchers confirmed that patients had cancer-killing T cells activated by the vaccines. And these didn’t seem to cause serious side effects, just mild problems, including flu-like symptoms, injection site reactions, skin rashes, and fatigue.

“While the number of people treated in these studies was small, both studies indicated potential benefits,” Dr. Melief.

But neither included a control group, so it’s not certain that the cancer remissions were entirely due to the vaccination. Researchers are turning to larger, controlled trials to prove safety and efficacy. Along the way, they will also likely work to make personalized vaccine development faster and more affordable.