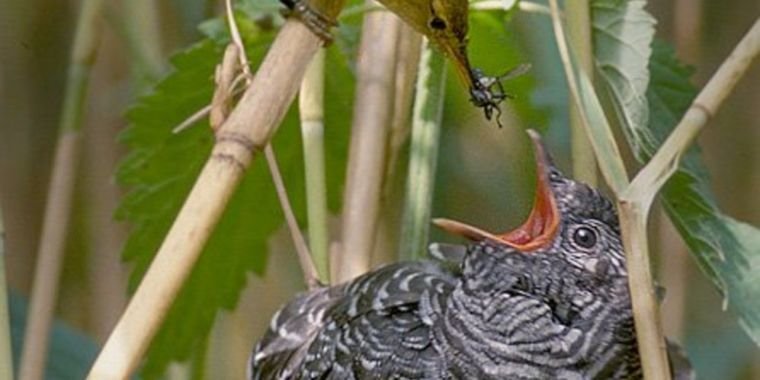 Cuckoos are nest parasites. That means they lay eggs in the nests of other birds, which then make an effort to raise the chicks. So you would think they would be quiet about it. Still, female cuckoos tend to make a sparkling, chuckling call as they lay their eggs. That is strange for them, because guest birds do not like cuckoos.

That chuckle doesn’t sound like the male cuckoo call at all. But it does have similarities to the sparrowhawk’s call, leading researchers Jenny York and Nicholas Davies to wonder if the call might have been a deliberate hoax — a ruse to distract the hapless host birds while their nest is being violated. Inside the York and Davies newspaper Natural Ecology & Evolution this week provides evidence that the cuckoo chuckle does indeed appear to distract host birds by frightening them into a sparrowhawk attack.

Many species have evolved to mimic predators, often for their own protection. For example, the wasp beetle mimics a stinging wasp, which sends predators away. Cuckoos seem to be fans of that tactic: some species of cuckoos are quite similar to hawks, and this seems to protect them from bullying by other birds.

Has the female cuckoo developed a cry that imitates a hawk? Both the cuckoo chuckle and the sparrow shriek consist of a rapid sequence of notes of equal pitch and rhythm. They sound different to a human ear. But, York and Davies write, “manipulation by imperfect mimicry is common in the natural world, and similarity to hawk calls in some key features may be enough to mislead hosts.” The way to find out is to determine if the call appears to be effective in frightening the host birds.

Host birds such as reed warblers are wise to the possibility of cuckoo parasitism. They bully adult cuckoos and sometimes reject host eggs in their nest by kicking them out or leaving the nests altogether. They also “monitor cuckoo activity near their nest and vary these defenses in relation to local parasitism risk,” write York and Davies. Because of this, female cuckoos are swift and unobtrusive when laying their eggs – apart from the chuckling call.

York and Davies conducted three studies to compare the effects of the chuckle call and the sparrowhawk call. They filmed reed warblers in their nests and used loudspeakers placed near the nests to emit a range of different bird sounds: the male’s characteristic cuckoo clock-like call, the female’s chuckling call, the sparrow-worked howl, and (as a control) ) the call of the extremely harmless Collared Dove. The birds did not respond to the calls of male cuckoos or pigeons, but they vigilantly responded to the calls of hawks and the female cuckoo’s chuckle: They began to look around their nests for threats.

But warblers are a target species for cuckoos, so they may respond to both as a threat, even if they can tell the difference between them. To test this, York and Davies conducted a similar experiment with birds preyed on by sparrowhawks but not targeted by cuckoos: the great tit and the blue tit. The birds responded vigilantly to both the chuckle call and the sparrowhawk call, but not to the dove or male cuckoo call.

It is possible to explain the cuckoo’s mimicry in evolutionary terms if it gives them greater reproductive success – if it increases the likelihood that eggs laid along with a false hawk call will go unnoticed by host birds, who are too busy to worry to get them eaten to keep a close eye on their nests. So, York and Davies tested whether reed warblers distracted by hawks or chuckling calls could lower their nest defenses.

The researchers faked a strange, parasitic egg in 75 different reed warbler nests by taking one egg out, painting it brown and putting it back. Then they played one of four calls at each nest. The majority of foreign eggs — 66 percent — were rejected in nests that heard male cuckoo or pigeon calls, but only 26 percent of eggs in hawk and chuckle nests were rejected. That suggests that the laughing call helps to distract the reed warblers long enough for a strange egg to go unnoticed.

The results are a useful example of an evolutionary arms race: cuckoos whose eggs are accepted by the hosts have more babies and do better evolutionarily; meanwhile, host birds that reject the cuckoo’s egg save their own young. So while host birds adapt to the cuckoo’s tricks over time, the cuckoo just adapts to get even trickier.