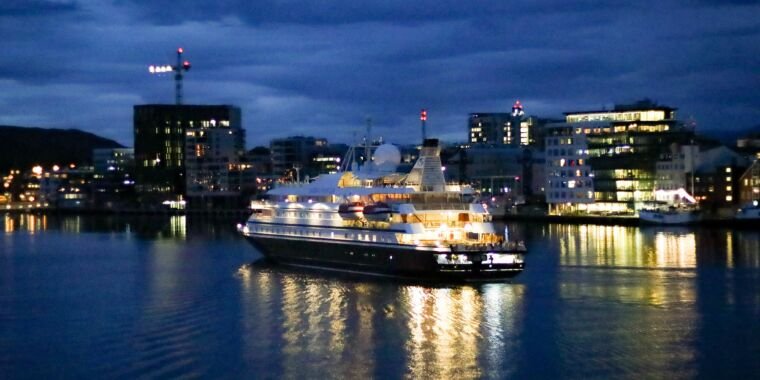 Update 11/13/2020 2:30 PM EST: Tests by Barbados authorities have confirmed seven cases of coronavirus infections among passengers on the ship, according to Gene Sloan, a cruise reporter who is on board and in quarantine. That’s about 13 percent of the 53 passengers on board. Five of the cases are all part of the same tour group. The other two are husband and wife and do not travel with the other five businesses. All cases came to light after a member of the group of five developed symptoms and tested positive on Wednesday. This prompted the ship to go into lockdown and test all 119 on board. So far, all other passengers and crew on board have tested negative.

Sloan reports that the ship’s seven infected passengers will be transferred to an isolation facility in Barbados. The remaining passengers who tested negative may be able to disembark the ship later Friday or Saturday and board flights back to their home country. Among the 53 passengers are 37 Americans, as well as passengers from the UK, Austria, Denmark, Norway, Sweden and Germany, Sloan said.

Update 11/12/2020 9:20 PM EST: Earlier this evening, the ship’s captain, Torbjorn Lund, announced the possibility of a sixth case in a person who was not in the same travel group as the other five cases. Lund said the latest case was discovered by an onboard rapid test, and the crew was waiting for the results of tests by Barbados officials to confirm the case. If the positive test is confirmed, it could indicate that the coronavirus has spread beyond the first cluster on the ship. The cruise reporter on the ship, Gene Sloan, said officials were now discussing plans for people who tested negative to disembark. Sloan noted that his rapid test on the ship was negative, and he is awaiting results of tests conducted by Barbados officials, expected early Friday.

Original story 12/11/2020 6:15 PM EST: The first cruise ship to depart in the Caribbean since the start of the coronavirus pandemic is now quarantined off the coast of Barbados after at least five passengers tested positive for COVID-19.

All 53 passengers and 66 crew aboard the small vessel, SeaDream I, were tested today to determine if there are other cases on board. The ship’s captain announced on Wednesday afternoon that one person had tested positive, causing the boat to be quarantined. Further tests reported Thursday identified four other cases, all close contacts of the first case.

The vessel’s owner, SeaDream Yacht Club, reported that the medical team had completed retesting all crew members and they were all negative. SeaDream said it was still working with all 53 passengers, 37 of whom were American.

News of the COVID-ravaged ship that first washed ashore from cruise industry reporter Gene Sloan, who is aboard the ship herself and currently quarantined in his cabin† Sloan, who boarded on Saturday, has thoroughly documented his experience, including all on-board COVID precautions. He has repeatedly referred to the trip as a “turning point” for the cruise industry, which has been hit hard by a pandemic that was first marked by devastating outbreaks on luxury cruise ships.

In his previous posts, Sloan had noted the “glove” of tests and temperature checks passengers had to undergo before boarding, which were intended to create a “COVID-free ‘bubble'” at sea. Passengers had to test negative several days before boarding, the day of boarding and a few days after boarding. However, it turned out that the cruise used an Abbott rapid test — the same test used at the White House. Experts have raised questions about the accuracy of these tests in detecting asymptomatic or presymptomatic infections and thus their use for general screenings.

Not so far memory

But, unlike at the White House, Sloan noted the wearing of masks by passengers and crew on board, as well as social distancing, which was easy to maintain as the boat only has 53 of its 112 guest capacity on board. In addition, off-ship excursions have been exclusively to empty beaches or catamaran trips for snorkeling, Sloan noted.

“In some respects, SeaDream I is the perfect ship to cruise in the stay-away-from-me era of coronavirus,” he reported early Wednesday. “Just a fraction of the size of a typical cruise ship, it’s designed for a luxurious yacht-like experience that revolves around alfresco lounging on the sun decks, water sports at the retractable marina and Zodiac landings on secluded beaches or other quiet places. ”

He added: “For many of the 53 passengers who booked this trip, the COVID crisis at home has quickly become a distant memory.”

Since the first case, passengers and non-essential crew members have been locked in their rooms “in an abundance of caution,” SeaDream said in a press statement. The company added that it is awaiting approval from the Barbados government to allow guests to disembark safely.

Ars contacted SeaDream but was redirected to the press release. A representative did confirm the number of passengers and crew that Sloan had reported. At the time of publication, the company had not yet confirmed the four additional cases.

“We are working closely with local health and government agencies to resolve this situation in the best possible way,” SeaDream’s executive vice president Andreas Brynestad said in the statement. “Our number one priority is the health and safety of our crew, guests and the communities we visit.”

Brynestad and SeaDream noted that the company had “operated successfully in Norway this season, completing 21 voyages in June”. In August, another cruise line in Norway was hit by a COVID-19 outbreak, forcing at least four people to be hospitalized and hundreds quarantined.

The COVID scare on board SeaDream I comes at an inconvenient time for the cruise industry. The Centers for Disease Control and Prevention lifted an industry no-sail order on Oct. 30, issuing a phased framework for conditional sailing in U.S. waters on that day. However, media reports in September revealed that CDC director Robert Redfield had originally wanted to extend the no-sail order until February 2021, but was rejected by the Trump administration.

On Nov. 3, Cruise Lines International Association (CLIA), a trade group representing 95 percent of the industry, announced it is extending a voluntary suspension of cruises through Dec. 31. The association said its members will spend the time preparing security measures outlined by experts and the CDC.

In response to SeaDream’s current situation, a CLIA representative told Ars via email that:

Unfortunately, no institution is immune to the virus, but our members are fully committed to implementing enhanced mitigation and response measures to minimize risk and protect public health. While specific details about this incident are yet to be determined, from the more than 200 sailings since early July, we have learned that when improved protocols are put in place and strictly followed, they work as intended to effectively mitigate the risks associated with releases and transmission of the virus on board. The industry’s focus on improved protocols and risk mitigation continues as more is learned about the virus and technological advancements.