Crash Bandicoot N. Sane Trilogy: As Good As The Uneven Series Will Ever Get |Techilink 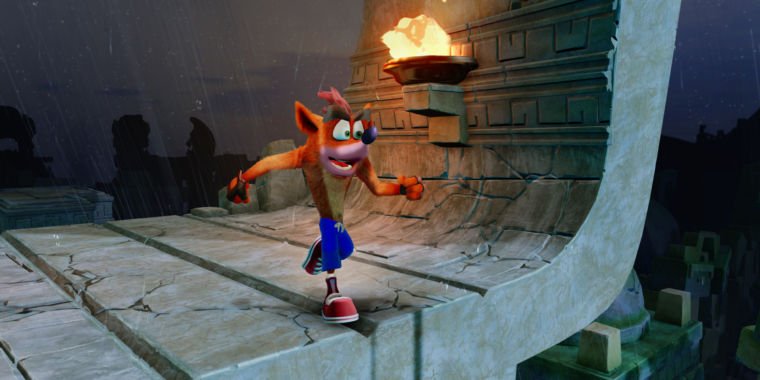 Crash Bandicoot N. Sane Trilogy gets about as much right as a game trilogy of this magnitude could possibly be. In recent years, a few uneven and unoptimized remasters of classic games have been pumped out, and I’m happy to report that the Crash series handlers at Activision haven’t dropped the ball in any Activision way, apart from of a current lock on PlayStation 4 systems. No pre-order restrictions; no microtransactions; not even the corner kicks of the game’s production.

N. Sane Trilogy lands this week with a lot of apparent love and care. It also lands with the same baggage that made Crash such a divisive platformer series in the ’90s. While that makes N. Sane Trilogy a hard game to recommend unequivocally, it also feels like the only way this collection could have come out. Developer Vicarious Visions chose authenticity over improvement, and in terms of game history and archiving, that choice matters.

As I learned in a June interview with the producers of Vicarious Visions, this Crash Bandicoot anthology is a tricky one to describe. N. Sane Trilogy is not a “remake” as the levels and general designs of the three games have been left largely intact, but it is not a “remaster” as most of the content had to be rebuilt and rendered again. Hard drives have been lost; codebases and assets have not been transferred. The creators of the Naughty Dog series have done some serious groundbreaking work to make the original Crash games look just like they do on PlayStation 1 consoles, and those code tricks don’t translate to modern CPU/GPU combos, either.

This PlayStation 4 game will start with all three games selectable from the start (if you buy the 23GB digital version it will be downloaded Crash 1 first). They all demand more or less the same from players: run from the beginning of a 3D level to the end, breaking boxes and searching for secrets along the way.

The originals have done a remarkable job pushing the PlayStation 1 to its limits, and while the same can’t be said exactly for the N. Sane Trilogy, it flexes a lot more visual muscles than I expected. Texture work is top of the line with the clean, colorful styles of Donkey Kong Land: Tropical Freezeand the level geometry has been worked out to look like a modern PS4 game.

Meanwhile, lighting, shadow, weather, foliage, blur, and fur effects all crank up the PlayStation 4’s GPU quite heavily. The updated animations and rendering slapped on Crash and his sister Coco are full of Looney Tunes charisma, and it’s easy to label some of their zoomed-in sequences as pre-rendered cinema content.

Other way around, N. Sané is still a PS1 game at heart, so CPU operations are easy and viewing distances are minimized (although Vicarious has at least lowered the viewing angle slightly for improved perspective). That makes the 30 fps refresh slightly harder to swallow. Vicarious should be proud of the fact that some of the game’s scenes look pre-rendered, and the frame rate seems to have a rock-solid 30Hz lock (which, as game historians will point out, makes this identical to the PS1 original).

But control latency is key to a rock-solid ’90s platformer, and in the PS1 era, most gamers had the advantage of a CRT screen. Modern players are already losing a few milliseconds to their TV sets, and the worst part of the Crash Bandicoot trilogy – the pixel-perfect jumps – are harder to swallow with the apparent extra delay that comes from a combination of a refresh of 30 fps, the DualShock 4 Bluetooth controller and any HDTV delay. (I tested N. Sané on the same rig I use to play like Mega Man 2if you’re wondering about my platform bias.)

Pseudo-3D that has actually gotten quite old

Crash isn’t a bad platform series by any means, especially when compared to its ’90s peers. The mix of top-down, rear-facing, and front-facing perspectives gave series creators Naughty Dog some clever tricks when building solid run-ups. and-jump-and-dash content. It’s fair to say that Crash picked up where Sonic’s 2D heyday left off – not quite as fast, of course, but there’s definitely a strong “bash and spin-through levels for top speed” element to the level designs. Plus, most of the other platformer series at the time had no idea how to make such a competent leap into 3D.

One reason is that Crash was a smart series. It was nowhere near a full-fledged 3D platformer, and Naughty Dog took care of that by locking the perspective. The developers built Crash on a foundation of proven 2D platformer principles, and adapted it with more “motion paths” enabled by full 3D rendering.

The most glaring problem for this remaster is that Naughty Dog didn’t take one of the best lessons from the Mario series: use a great, new idea once and then throw it in the trash. Crash Bandicoot 1, 2, and 3 rely heavily on rehashed levels with players returning to the same gimmick or twist over and over with only minor changes or jumps in difficulty. Run away of a boulder was great in the beginning! But not the sixth time.

This is made all the more annoying by the seemingly random placement of hidden items and secret exits in the series, which would perhaps be more bearable if Crash didn’t insta-die when falling into a pit or bumping into an enemy unguarded. You’ll probably do both of those things while pressing the edges of the level or jumping to seemingly secret paths. Either way, you’ll run into friction: focus on the secrets, and repetitive levels take much longer to beat. Ignore the secrets and you’ll miss out on some of Naughty Dog’s really clever level twists.

Why can’t they just unlock everything here?

Had N. Sané delivered with an “all levels unlocked” mode, as we at Ars begged to do game remaster teams, I may have sung a different tune. Naughty Dog spread enough clever, fun, colorful, and time trial-worthy levels across the first three Crash games to be a full game. Vicarious should have made a playlist of these levels for the first time in N. Sane Trilogy to fend off that sense of repetition and emphasize the variety of the entire series.

Instead, it’s best for players to skip the first game, which Crash 2 handily surpassed, and Crash 3 expanded to decent effect (although with a few too many “ride this helpful creature” levels for my liking). N. Sané is still a solid collection, and all levels benefit from a rebuilt time trial system that hands out time bonuses for players who find and break open the correct crates. I enjoyed chasing lower completion times while marveling at the remake’s top-notch cartoonish styles.

However, I haven’t changed my mind about some of the series’ more pedestrian platforming challenges, which I believe are filled with pixel-perfect jumps and annoying “one wrong move and you have to jump a full minute” moments. If you skipped Crash in the ’90s and think you’re in for a real nostalgic treat, be warned. Very warned.

Then again, right now, for both the cost and the amount of content here, I can’t think of a better PlayStation-exclusive platformer to give to a kid, especially the kind of kid who doesn’t mind FAQs and secret – items guides to reach the 100 percent. The slick design will trick them into playing through a real history lesson in the platform genre, and what parent doesn’t love to sneak some education into their kids’ entertainment?

verdictAnyway, your Crash bias is reinforced by this largely top-notch return to the originals.