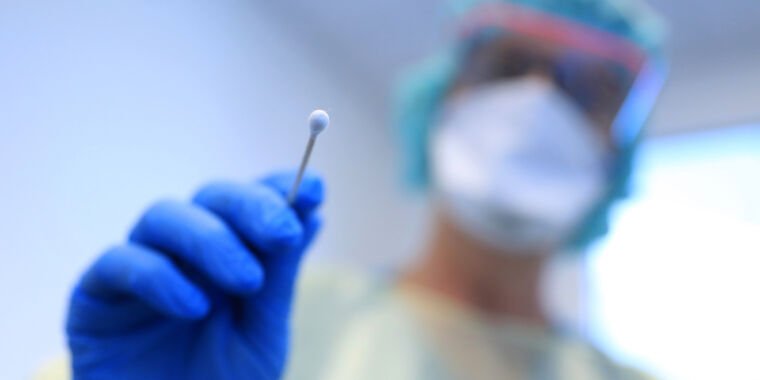 The US Food and Drug Administration this weekend approved a saliva-based diagnostic test for COVID-19 that costs less than $5, is faster than current lab tests and could potentially evade supply shortages plaguing the country — without lose a lot in accuracy, according to early data.

The test, called SalivaDirect, was developed by researchers at Yale University, who have no plans to commercialize the test and have made the testing protocol fully open and available.

If widely adopted, the protocol could help improve the country’s COVID-19 testing, which is currently bleak. Some patients have to wait for weeks to get results. With such long delays, contact tracers have no chance to reach the exposed before they have a chance to transmit the infection. The delays stem from the sheer volume of tests coming in, as well as shortages of critical supplies, such as nasal swabs and chemical reagents needed to conduct the tests. SalivaDirect tries to address both problems.

The new test is effectively a streamlined version of the current standard for diagnostic testing for COVID-19. In general, these tests determine whether a person is currently infected with the pandemic coronavirus, SARS-CoV-2, by detecting the SARS-CoV-2 genetic material, which is in the form of RNA rather than DNA.

The basic steps of the test begin with inserting a long cotton swab far into a person’s nose until it touches the back — a nasopharyngeal switch — to try to scrape out any SARS-CoV-2 that may be present. The swab will pick up anything, of course, including snot, bits of human cells from the nose, whole virus particles, and any other germs that may be present. To clean up the starting material, most testing protocols then call for a test that takes out just the genetic material, removing all debris and unimportant bits. This requires time and specific reagents, which can be scarce.

Then the isolated genetic material goes to a second test called an RT-qPCR, or quantitative reverse transcription polymerase chain reaction. In it, pieces of RNA are converted into DNA, which is then examined for sequences that are only present in SARS-CoV-2. When those sequences are present, small fragments of synthetic DNA — called primers — attach to the SARS-CoV-2 code and direct enzymes to make copies of that stretch of DNA. The copies are cleverly designed to fluoresce when formed. Then the test repeats this step to make another set of glowing copies, and another, and another, and another in an exponential process, until enough copies of the SARS-CoV-2 DNA are present to make a fluorescent signal above the background.

The faster that signal is detected — that is, the fewer cycles it takes to get it — the more SARS-CoV-2 RNA there was to start with, hence the “quantitative” part of the name. Researchers call this the “Cycle Threshold” or Ct. If the Ct is low, say less than 30 cycles, it suggests there was a good amount of RNA to begin with, perhaps from a raging infection. If it’s higher, say 37, it means there was little SARS-CoV-2 RNA in the sample, perhaps from a fading infection or genetic remnants of a recently terminated infection.

For diagnostic tests, the Ct value is not necessarily useful: if you have any amount of SARS-CoV-2 RNA in your nose, you have been or have been infected very recently. The test does not indicate contagiousness or previous exposure to the virus. But comparing Ct values ​​between different tests for SARS-CoV-2 is helpful for comparing how sensitive a particular test is.

For the SalivaDirect test, Yale researchers cut some corners without losing much in accuracy or sensitivity. First, with the global shortage of cotton swabs, they skipped the stick and just started spitting. They verified that SARS-CoV-2 is present in saliva as in the nose. They took saliva and nasal swabs from 37 known positive patients and performed a standard lab test for SARS-CoV-2 on all samples. There was 83 percent agreement between the paired nasal swabs and saliva samples. Nearly all were positive, but three nasal swabs and three different saliva samples came back negative, invalid, or inconclusive. They also found that the virus in collected saliva was stable for up to seven days at 4°C, room temperature or 30°C without the addition of preservatives.

The researchers then completely skipped the RNA extraction step. Instead, they heated the saliva samples along with an enzyme called proteinase K that chops up any protein residue in the sample — human cells, whole viral particles, etc. — leaving the SARS-CoV-2 RNA standing. This is useful because the extraction step takes additional time and the reagents used in the assay are currently scarce. Finally, the researchers streamlined the RT-qPCR by combining a few steps and still saw comparable Ct values.

To do some of their validation work, Yale partnered with the National Basketball Association to test players and personnel in the NBA bubble. The NBA partially funded the research.

Based on the list prices of the materials used, the researchers estimate the cost of SalivaDirect to be anywhere from $1.29 to $4.37 per sample, depending on whether a lab chooses to use a saliva collection device. This is cheaper than current standard tests, which experts estimate in the range of $15 to $50 per sample for materials. Yale researchers suggest labs charge $10 for a SalivaDirect test.

“Widespread testing is critical to our monitoring efforts,” Nathan Grubaugh, one of the test developers and professor at the Yale School of Public Health, said in a press release. “We’ve simplified the test so that it costs just a few dollars for reagents, and we expect labs to charge only about $10 per sample. If low-cost alternatives like SalivaDirect can be implemented nationwide, we might be able to help this pandemic finally getting it under control even before there is a vaccine,” he said.

Step in the right direction

On Saturday, August 15, the FDA granted SalivaDirect with an emergency use authorization. “The SalivaDirect test for rapid detection of SARS-CoV-2 is yet another test innovation game changer that will reduce the demand for scarce testing resources,” said Assistant Secretary of Health and COVID-19 Test Coordinator Admiral Brett Giroir in a statement. Although the FDA noted that it has approved four other COVID-19 tests that use saliva, those tests had “variable performance.”

While there has been a lot of fanfare surrounding the authorization of SalivaDirect, it’s important to note that it is: not a rapid, at-home test that some have suggested should be used daily to help control the pandemic. Those cheaper, less accurate tests are more like home pregnancy tests, but with saliva instead of pee. SalivaDirect still requires lab testing with a specialized machine to perform the RT-qPCR.