COVID-19 won’t affect climate much, but economic recovery can | Techilink 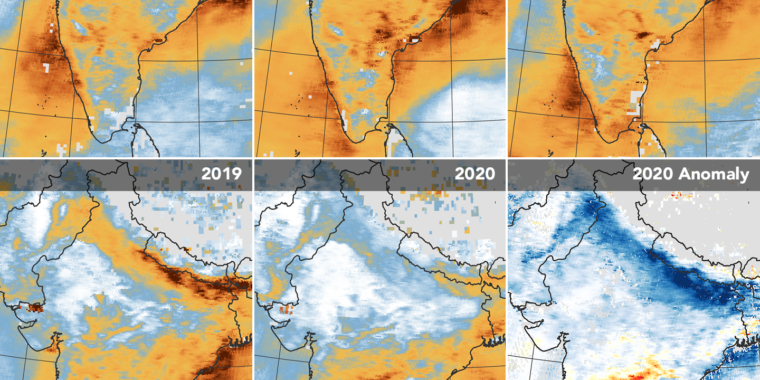 Given the radical changes people have made to limit the spread of COVID-19 (hello month six quarantine-except-for-groceries), many have naturally wondered what impact this has had on pollution, including greenhouse gases and climate change. Some short-lived pollutants dropped noticeably during April’s severe lockdowns, as businesses closed and travel was reduced. But CO2 levels don’t fluctuate based on such short-term events, so the long-term effect on climate change would be expected to be trivial — assuming economies recovered fairly quickly.

A new study led by the University of Leeds’ Piers Forster (and his daughter Harriet) uses phone location data to re-examine the first six months of the year, tracking more than just CO2† Although they ultimately find that the impact has been small, their results also show that the way economies choosing to recover could have a much greater impact in the long run.

The work is based on mobility data made public by Google and Apple, in 114 countries. Using that along with energy and emissions data sets, the researchers converted behavioral changes into pollution changes. The telephone data records changes in transport use quite well, although alleged changes in activity between residential, commercial and industrial environments are more difficult to relate to energy. The researchers compared the changes they saw in their phone data with a May study that estimated emissions in April using things like utility data. They found that their phone-based estimate of home energy use likely overestimated the real change.

Why could this be the case? To give an example, data from smart meters in the UK shows that energy consumption increased by around 20 per cent when people moved during the day to work from previously empty homes, but only by four per cent when previously occupied. The phone data would not capture these differences. The researchers also note that changes are likely exaggerated in places like India, where the smartphone subset of the population was more likely to have had jobs that allowed them to work from home. So the pollution reduction estimated from this data is probably on the high side of plausible.

It’s also worth noting that no data was available for China, so figures from that May survey were used to fill in there.

Ultimately, they estimate a significant drop in emissions of a number of pollutants — the biggest change coming in April, with a gradual recovery through June. The most drastic changes for the climate appear to be sulfur dioxide and nitrogen oxides.

Sulfur dioxide pollution produces aerosol particles in the atmosphere that scatter sunlight back into space, cooling the planet. The reduction in emissions of this pollutant was mainly due to slowed industrial activity; the changes were also rapid, as aerosols wash out of the atmosphere quite quickly. Nitrogen oxide emissions, on the other hand, were mainly caused by reduced transport activity. These gases react to produce ozone in the lower atmosphere. Since that is a greenhouse gas, it has a warming effect.

If we estimate the impact on average temperatures from 2020 to 2025, these two changes roughly cancel each other out. The drop in nitrogen oxide emissions in the first half of the year would cause about 0.01°C of cooling (0.018°F if “small” isn’t recognizable enough to you), while the drop in sulfur aerosols would cause slightly more warming. cause then That.

Keep in mind the short dip in CO2 emissions, and the total effect of the lockdowns would be about 0.01°C lower temperatures by 2030. It’s not impressive.

The bigger question is whether anything will change after the pandemic is finally over. To look at that question, the researchers simulate different scenarios up to 2050. There’s the “two-year blip” scenario, where the lockdown reductions continue to a lesser extent until 2021, then recover to fit the emissions trajectory we’d get. as countries maintain their current commitments from the Paris Agreement of 2015. They also adopt a fossil fuel recovery scenario, where national economic stimulus plans favor fossil fuels, and two green stimulus scenarios, where plans promote large investments in efficiency and renewables.

The high and low scenarios are about 0.3°C apart by 2050, with the low scenario actually representing a peak of only 1.5°C above pre-industrial levels.

The researchers write: “Our work shows that the global temperature signal due to the short-term dynamics of the pandemic is likely to be small. These results highlight that without underlying long-term system-wide decarbonization of economies, even massive behavioral changes lead to only modest reductions in warming. However, economic investment choices for the recovery will have a strong impact on the warming trajectory by the middle of the century. Pursuing a green stimulus recovery from the post-COVID-19 economic crisis could put the world on track to keep the long-term temperature target of the Paris Agreement in sight.”