Could “disordered rock salts” bring order to the next generation of lithium batteries? | Techilink 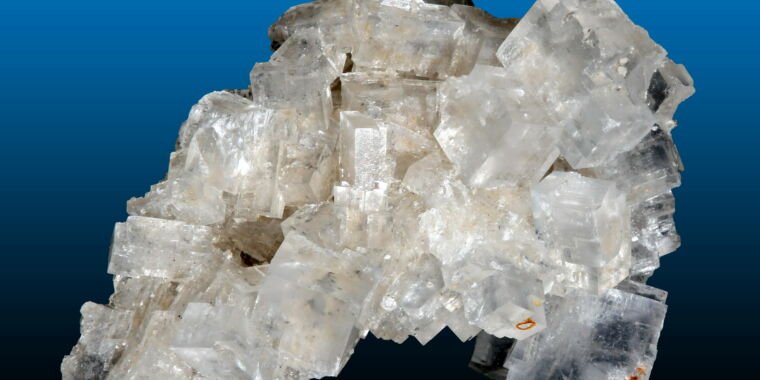 Better batteries are a vital technology for everything from your gadgets to the stability of an increasingly sustainable network. But most of the obvious ways to squeeze more capacity into a battery have been tried and they all run into problems right away. While there may be ways to solve those problems, they will take a lot of work to overcome those hurdles.

Earlier this week, a paper discusses a new electrode material that appears to avoid the problems that have plagued other approaches to expanding battery capacity. And it’s a remarkably simple material: a variation of the same structure formed by crystals of table salt. While it’s far from ready to throw in a battery, the early data certainly indicates it’s worth looking further into.

With lithium-ion batteries, as their name implies, lithium is slid between the cathode and the anode of the battery. As a result, both electrodes have to store lithium atoms. So most ideas for next-generation batteries involve finding electrode materials that do this more effectively.

The simplest of these is probably to use an electrode that is made of lithium metal. This works from a chemical point of view, as long as the reactive lithium is well protected. But from a physical perspective there are problems: there is nothing on the electrode to structure the lithium once it comes back during a charge/discharge cycle. So the metal that re-forms tends to be uneven and spiky, and it will eventually punch through the membrane separating the two electrodes.

One approach that works for the other electrode is to simply react the lithium with oxygen and store it as a lithium oxide. Again, there are structural issues here with the formation of the oxide. But most of the problems are chemical in nature, as there are numerous side reactions – some with the other components of the battery – that cause the capacity to drop rapidly.

So other researchers have focused on electrode materials that can store much more lithium. Different sulfur materials work, but they also tend to react in ways that reduce battery capacity. Silicon is chemically inert in batteries, but when you put that much lithium in it, it expands enormously (also a problem with sulfur-based electrodes). As a result, it tends to physically break the battery unless there is a way to control this expansion.

Until now, not much has been said about materials that solve both the chemical and structural problems. But that’s exactly what disordered rock salt seems to promise.

So, what exactly is a disordered rock salt? They are best understood starting with ordered rock salt, and they are represented by crystals of sodium chloride. In these crystals, the sodium and chloride ions form regular, ordered structures. You can think of these as a series of things like cubes or pyramids, with ions at each of the corners of the shape. This structure leaves little open space in the way, as the ions are tightly packed and every available corner has one.

Disordered rock crystals have the same sort of ordered structure as their relatives, but simply don’t pack ions into every possible location of that structure. The precise places that do not contain ions can vary, which is why they are called “disordered” – their theoretical structure is very ordered, but it is filled in somewhat chaotically.

What does this have to do with batteries? Disordered rock salts can form with some of these spaces filled with lithium ions. And it’s possible to cram some extra lithium ions into the spots in the crystal that would otherwise be unoccupied in its disordered form.

For this work, a large US-based collaboration used a material made up of a combination of lithium, vanadium and oxygen. The crystal framework has the formula V2O5, with a variable number of lithium ions built in. To find out how much, the researchers made and charged and discharged some of the material. They then imaged the material using a combination of X-ray and neutron diffraction, as well as electron microscopy. They also built a dynamic chemical model of the charge/discharge process.

As expected, the charge and discharge cycle involved shifting lithium ions in and back out of the structure. At maximum charge, the material can contain nearly five lithium ions for every V2O5 unit. When completely stripped of lithium, it dropped to just under three lithium ions for every unit of V2O5. Critically, because it fits into a very ordered structure, the added lithium doesn’t change it much — it only expands by a total of 5.9 percent.

The process of charging and discharging lithium is not a static process where the new ions are pushed into place. Instead, lithium will preferentially occupy some locations in the crystal but shift to others as additional lithium ions enter and change the charge environment. Moreover, the vanadium ions can also change their oxidation state during this process.

The interesting thing about this shift in costs is that it’s remarkably easy to get some of the cost back. When the researchers built a battery with it, they found that about 40 percent of its total capacity could be discharged in just 20 seconds. And the total capacity was only slightly less than that reported for batteries using a pure lithium metal electrode.

The best thing so far was that it was stable. After 1000 charge/discharge cycles – that’s almost three years of daily charging – it was still at 87 percent of its original capacity. And they sent one through 6000 cycles and found it still worked.

The big problem with the material at the moment is that the LiXV2O5 does not conduct well, which means that harvesting charges needed for a functional battery is not very efficient. The researchers suggest it will be necessary to either dope the material with something more conductive or disrupt the rock salt with some type of conductive material.

But that seems to be a smaller challenge than that faced by many of the alternative materials that have been thought of as battery electrodes. Of course, other problems can arise when trying to figure out how to produce something like this on a large scale. But early results suggest someone will no doubt be trying to figure out what those problems might be.