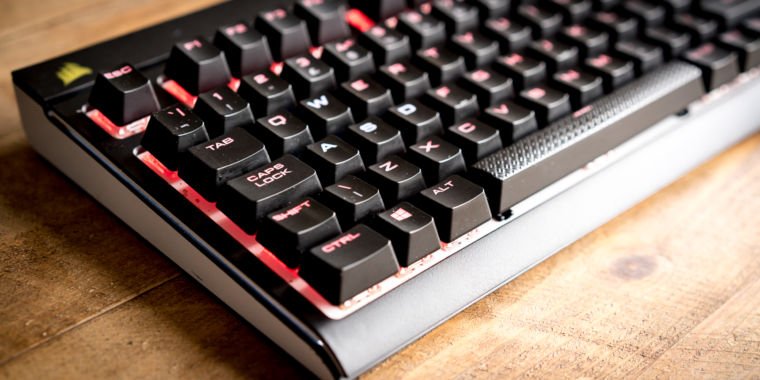 For every person who loves the tactile feedback of a clicking mechanical keyboard, there are several others – usually colleagues, lovers, or easily excitable pets – who hate it. After all, the sound of a particularly tenacious typist firing it on a Cherry MX Blue keyboard, every high-pitched click and hollow clack echoing through a room like pistol shots, is quite something. And God help you if you’re on the receiving end of a buckling spring IBM Model M. That’s more like a shotgun.

The problem is that mechanical keyboards have many advantages. The tactile feedback is great for hardcore typists who absolutely need to know when a key has been pressed, while the increased actuation distance – i.e. the point at which a key switch is activated – makes it easy for gamers to rest their fingers on keys so they can get ready are to take action. In addition, mechanical keyboards are generally much more robust than their mushy membrane or scissor switch counterparts (usually used with chiclet keys in laptops), and are rated for as many as 50 million keystrokes.

That’s where Corsair’s Strafe MX Silent keyboard comes in. According to Corsair, it’s the only keyboard with silent mechanical keys out of the box. It’s also the only keyboard with Cherry’s MX Silent switches, which will remain a Corsair exclusive until sometime in 2017. In theory, the new switches – which are based on the clickless Cherry Red switch with a few tweaks – offer all the pleasures of a mechanical keyboard, but are “30 percent quieter than other mechanical gaming keyboards.” Corsair doesn’t specify exactly what those keyboards are, or how exactly it measures that reduction, but hey, if it works, it works.

Outwardly, the keyboard itself is not that interesting. It uses Corsair’s Strafe chassis, which is made of plastic, rather than the aluminum used in the Corsair K70 range. Unfortunately, thanks to the higher cost of the MX Silent switches, the keyboard costs a hefty £160 / $150 – just £10 / $10 less than the top-end K70 Lux, and lacks the extra media keys. [Which might be a good thing -Ed.] That said, the chassis feels sturdy enough, the keycaps are good quality (even if I’m not a fan of the font), and there’s a button to disable the Windows key so you don’t accidentally hit the Start button. menu opens in the middle of a game.

There’s also RGB lighting for those who want the desktop bling, but using it means braving Corsair’s crude and confusing customization software. Given how long Corsair has been making backlit keyboards (since 2014), it’s disappointing that it still doesn’t get the software right. There’s a cheaper version without the RBG lighting (it has red lights instead) that costs £99/$110.

There are also some extra, slightly more concave caps in the box for the all-important WASD keys, as well as a nice palm rest. But it’s the MX Silent switch that has the real appeal, and Corsair and Cherry have used some magic to reduce the noise. The base of each switch is reinforced with fiberglass to reduce vibration, and there are mechanical tappets that should soften the release of the keys if your fingers come off. These additions shortened the key travel slightly (3.7mm versus 4mm in a standard Cherry Red), but you’d be hard-pressed to tell the difference. The actuation force remains the same at 45g.

There are other ways to dampen a mechanical keyboard, including buying silicone O-rings and pads that sit under a key to dampen the noise if they bottom out. After hearing them in action, they certainly help, but much of the noise comes from the spring that returns each key to its original position, and O-rings do nothing for that. In theory, the MX Silent switch does.

After months of use, I’d rather the MX Silent were truly called the “MX Slightly Quieter,” though the marketing department would probably veto that. The keys are certainly not silent and there is still a lot of clicking as you type. The damping does help though, and the high-pitched clicks you’d normally hear from a mechanical keyboard have been reduced to a dull thud – something more akin to a decent membrane keyboard – making them much more bearable. Even heavy typists who lose keys benefit from the lower noise levels.

And that has been compared to a Cherry Red. Compared to a Cherry Brown or Blue there’s an even bigger difference, and if there’s someone in your life who drives you to the wall with excessive keyboard noise but can’t bear to part with mechanical keys then the MX Silent an ideal one gift. However, there’s no real actuation point in the key (that’s the click part on Browns and Blues), something to keep in mind if you rely on that feel when typing.

£160 / $150 is a lot of money to pay for a keyboard, especially one that lacks the quality materials typically found in this price range. But since Corsair has exclusive access to the MX Silent switch, there isn’t really an alternative that gets the same level of noise reduction without losing the feel of the Cherry switch. Matias has its Quiet Pro keyboard, which retails for around £130/$140, but it uses Alps Electric switches, and has been noted to give up some tactility in favor of noise cancellation.

That’s not a trade-off you have to make with the Strafe MX Silent. If you like using mechanical keyboards but don’t want to deal with the noise (or complaints), definitely give it a try.