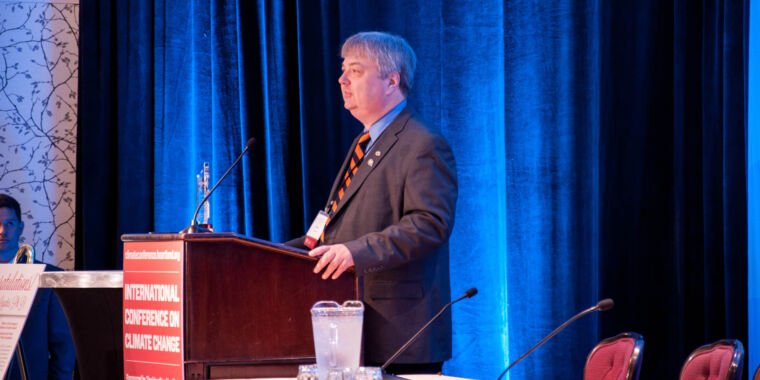 The US National Oceanic and Atmospheric Administration recently hired a new person to the position of deputy assistant secretary at the highest level. Normally this wouldn’t be too surprising or newsworthy, but this is an exception. Professor David Legates of the University of Delaware joins NOAA as the “Deputy Assistant Secretary of Commerce for Environmental Observation and Forecasting” — a well-known contrarian who rejects the science of human-caused climate change.

The position is apparently reporting to acting NOAA chief Neil Jacobs, although the circumstances of the appointment are unknown. Ars asked NOAA about the duties of this position, but the agency has not responded. Jacobs became entangled in the fallout from President Trump’s inaccurate tweets about Hurricane Dorian that culminated in a forecast map that had been edited with a black marker. A pair of investigations found that Jacobs capitulated to guidelines from the office of Secretary of Commerce Wilbur Ross and the White House, releasing an unsigned NOAA statement trying to salvage the president’s erroneous statements by the forecasters who corrected him. mildly admonish.

The Washington Post reported that the Department of Legates at the University of Delaware informed students in an email that he would not be teaching in the fall semester, noting, “David hopes to be back at UD in the spring.”

Whatever it is, I’m against it

Legates was a state climatologist in Delaware from 2005 to 2011. Although he started his career working on precipitation data and patterns, he is best known for rejecting the human role in climate change at every opportunity. He is a regular contributor to work at the Heartland Institute – a “think tank” that opposes the facts of climate science. When Ars attended a Heartland conference in 2015, Legates was there and presented a talk that dismissed extreme rainfall trends in the US as an artifact of measurement changes.

For example, the report’s executive summary concludes, “There is no convincing scientific evidence of long-term trends in global mean temperatures or climate impacts that exceed the limits of natural variability.” It cannot be emphasized enough how demonstrably incorrect that is.

Why limit your trolling to the climate?

“It is vital that they recheck the models and assumptions,” the post reads, “and distinguish between COVID-19 deaths that are actually due to the virus… pneumonia or other problems. We cannot afford a cure worse than the disease — or a protracted and deadly national economic shutdown that could have been shortened by updated and corrected models.”

The post then turns to critiques of climate models, falsely claiming that they have “always overestimated warming”. It even repeats the old canard of climate scientists “changing” temperature data. These views are certainly relevant given the “Environmental Observation and Forecasting” in Legates’ NOAA feature.

Legacies also contributed to a 2019 Heartland briefing on sea level that erroneously stated:

Contrary to the IPCC’s statement that it is “highly probable” that sea level rise is accelerating, Burton (2018) reports that the highest quality coastal tide gauges from around the world show no evidence of acceleration since the 1920s or earlier, and therefore no evidence of being affected by rising atmospheric CO2 levels.

In 2015, Legates and several other Heartland regulars published a paper titled “Why Models Are Hot: Results of an Irreducibly Simple Climate Model.” Their model predicted no more than 1°C of global warming until the year 2100, in stark contrast to published research. This was because the paper claimed that the sensitivity of the Earth’s climate to greenhouse gases was much lower than estimated by climate scientists.

The problem, according to a response from a group of scientists, was that their model was a mess. For starters, it assumed that the climate system responded immediately to the increase in greenhouse gases, with a nose for the existence of the ocean. And some of the values ​​that control their model are selected analogous to voltage controlled electronic circuitsbecause she believed the system was too stable to have significant reinforcing feedbacks.

But most unbelievably, the paper refused to compare its model with observed global temperatures – because the modeled temperatures were much lower than reality. Instead they have created a hypothetical global temperature record based on cherry-picked time periods and then treated the successful fit as evidence of their model’s accuracy. (Real climate models actually correspond to real temperature data.)

Legates is also in the small Rolodex of recognized opponents invited to government hearings to testify that climate science is “restless.” In 2014, he testified before the Senate Environment and Public Works Committee that climate change is not harming agriculture in the United States. He claimed the data shows no changes in drought and criticized the use of climate models as scientific tools.

“Droughts that have occurred in the past are likely to recur, and with likely similar frequencies and intensities; therefore preparing for their return is a better strategy than trying to reduce them through draconian CO2 emission control policy,” he testified.

Many of his testimonials were focused not on science, but on his alleged prosecution for ‘dissenting’. Like other opponents obsessed with drawing conclusions the evidence doesn’t support, he attributes the rejected papers (and challenges to his status as a state climatologist) not to his own mistakes, but to a conspiracy to thwart “independent thinking.” to push. This imagined persecution earned Legates a “Courage in Defense of Science Award” at that Heartland Institute conference in 2015.

Ideas like the above have become commonplace among politicians and performative committee hearings, but they will now be represented at the highest level of NOAA — an agency charged with critical real-time surveillance and research.

This is, of course, part of a pattern under the Trump administration. While meeting with California officials about record-breaking wildfires on Tuesday, President Trump ignored his concerns about the inescapable reality of rising temperatures, proverb“It’s getting cooler, check it out.” When California Secretary of Natural Resources Wade Crowfoot replied that he wished science would agree, Trump added, “I don’t think science knows, actually.”