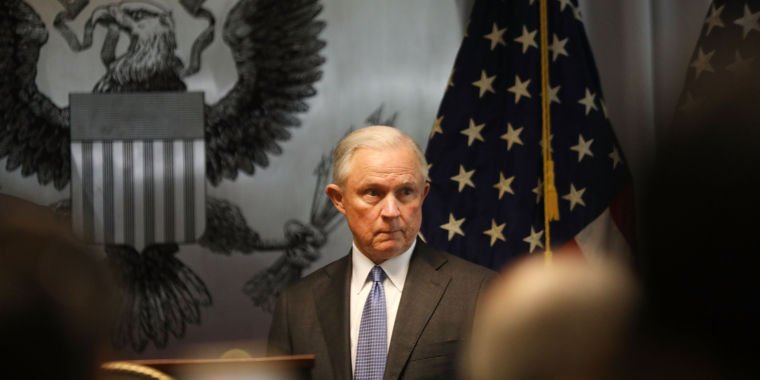 Attorney General Jeff Sessions is clearly motivated to fight the state’s marijuana laws. Unfortunately for him, Congress simply blew away his chances.

The new 1,665-page spending bill upholds a provision that prevents the Justice Department from using any of its funds to obstruct state laws related to medical marijuana. The department cannot “prevent any of them from implementing their own laws authorizing the use, distribution, possession or cultivation of medical marijuana,” section 537 of the bill reads.

The $1.1 trillion spending bill — the Consolidated Appropriations Act, H.R. 244 (PDF) — passed the Senate today by a vote of 79 to 18. The White House has indicated that Trump will sign it, keeping the government in power until September.

The section tying the hands of the Justice Department on medical marijuana enforcement is not new. It’s been around since 2015. But it received little fanfare under the Obama administration, which took a lenient stance on enforcing federal marijuana laws in states that legalized its use.

That all changed when Jeff Sessions took control of the Justice Department. Sessions has repeatedly said he opposes legalization and has indicated that he would abandon Obama’s lax enforcement stance.

For example, at a congressional hearing in April 2016, Sessions proclaimed that “good people don’t smoke marijuana.” When Sessions was asked about enforcement at a press conference in February, he said:

I am definitely not a fan of extensive marijuana use. But states can pass the laws they choose. I would just say that it remains a violation of federal law to distribute marijuana anywhere in the United States whether a state legalizes it or not.

Section 537 still allows Sessions to pass after recreational use of marijuana in the eight states that have passed such laws. But without funding, Sessions has few options to fight medical marijuana laws in 29 states and the District of Columbia.

In a press release, Robert Capecchi, director of federal policy for the Marijuana Policy Project, supported the inclusion of Section 537 in the bill. He also pushed for permanent laws to protect the state’s marijuana policy.

Congress seems increasingly comfortable with states adopting their own marijuana policies. Unfortunately, such spending bans expire at the end of the fiscal year, so there is still a need for a long-term solution.