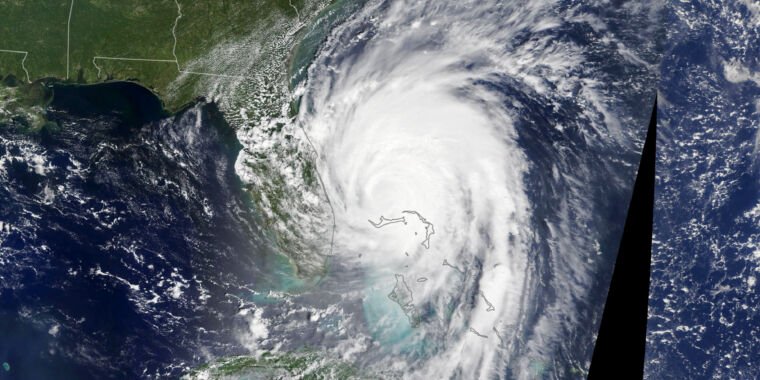 In recent weeks, there has been some added drama over last September’s hurricane dust-up between President Trump and the National Weather Service. Last week, the Commerce Department’s inspector general wept angrily at the leadership blocking the publication of its report on all the legal issues arising from the vacuuming. That report is now out and it provides a solution to the story.

If you’re unfamiliar with the background, as Hurricane Dorian approached the US coast, President Trump tweeted that Alabama “would probably be hit (much) harder than expected” — a statement that wasn’t true, as the storm would turn north. and along the east coast. His statement, however, sparked phone calls from concerned people in Alabama wondering if the forecast had changed. In response, the Birmingham National Weather Service office tweeted, “Alabama will NOT see any effects from #Dorian.”

This tweet disrupted the White House, ultimately resulting in a controversial, unsigned statement from NOAA essentially saying the president was technically right and that the Birmingham office should have nuanced their tweet. (There was also an incident where a hurricane forecast map in the Oval Office was modified with a black marker to make it look like Alabama was in danger.)

The NOAA statement, in turn, sparked formal complaints, sparking several investigations into the matter. The broad strokes of what happened have long been known: The White House was upset and called Secretary of Commerce Wilbur Ross, whose office worked with NOAA leadership to release the statement. A report released last month by NOAA’s Scientific Integrity Officer reinforced that image, blaming the NOAA leadership for playing along but noting that Commerce personnel had run the show.

The panel behind that report had no access to the Commerce staff, but Commerce Inspector General Peggy Gustafson did. And while the outline of events was known, some details in Gustafson’s report are noteworthy.

The report includes interviews with everyone involved in the statement, as well as some emails and text messages. And that allows for a step-by-step description of events, even if there are discrepancies in the versions presented by different people.

It all started with an email from Acting White House Chief of Staff Mick Mulvaney to Secretary of Commerce Ross. Mulvaney explained that Trump was tweeting based on the latest information they had seen and failed to understand why the Birmingham office would tweet a correction. “As it stands,” Mulvaney wrote, “it looks like the… [National Weather Service] deliberately contradicted the president. And we need to know why. He wants either a correction or an explanation or both.”

Jobs on the line

Ross reached out to acting NOAA director Neil Jacobs to ask about the prediction timeline to see where the two tweets fit. The next day, he assigned his Chief of Staff Michael Walsh and Acting Deputy General Counsel David Dewhirst to the intelligence-gathering, which resulted in the writing of statements with NOAA’s Neil Jacobs and its communications director, Julie Kay Roberts.

Roberts said Walsh told her that “jobs are at stake. It could be the forecasting office in Birmingham. Or it could be someone higher than that. And the higher is less palatable.”

These four gave different accounts of the meeting in which the statement was prepared. Dewhirst claims he was more or less just typing the statement, but the NOAA folks dictated it. Everyone else seems to indicate that it was Dewhirst who was responsible for the contents of the statement.

NOAA’s Jacobs and Roberts went through the timeline of predictions and found that significant effects in Alabama had faded from the Saturday morning forecast — long before Trump’s tweet late Sunday morning. The National Security Council received updated forecasts in real time, meaning the president should have been aware of this already. Jacobs had explained that “AL was never in the orbital cone … AL was in the percentage probability of seeing tropical storm winds” and that “[n]no one here would have said AL would have effects with a 15 percent chance of seeing wind speeds of 39 mph. That’s just a windy day, even if it was a 100 percent chance.”

But that was ultimately the very justification used to defend Trump’s tweet that Alabama was “probably going to be hit (much) harder than expected” — a forecast map showing a swath of Alabama with a chance of winds in excess of 39 miles each. hour. The second half of the statement was the most controversial:

The Birmingham National Weather Service’s Sunday morning tweet spoke in absolute terms that did not reflect the likelihood of the best forecasting products available at the time.

NOAA’s leadership has apparently pushed back on this move, and Jacobs called it “just a bad idea.” But the Commerce staff rejected them. Julie Kay Roberts Said She “Remembers”[ed] specifically told, and I believe it was by Dave Dewhirst, I think it was Dave, that if the Birmingham part didn’t stay it wouldn’t meet the need. Whatever that meant.”

The report also says: “The [Commerce] The department’s policy director at the time, who traveled with Secretary Ross and participated in a phone call about the statement, opined that “the president was not wrong, and Birmingham was not. They were ships passing at night.’ But the statement had to ’tilt’ a bit against NWS Birmingham to counter ‘the press people’ who have tilted the story ‘against the president’.”

Forecasters from the Birmingham office who were interviewed certainly disagreed with the warning. The report states: “[One] The forecaster explained that the wind probability map for tropical storm-force winds isn’t something they “advertise” or base the forecast on — and the state and local decision makers they informed had already decided they no longer needed briefings on Hurricane Dorian. .”

Even if the Birmingham tweet had deserved correction, five days would have passed and the hurricane would have continued. It was clear that the statement had nothing to do with getting a prediction right or clearing up public confusion.

And the report is not kind to the Commerce employees involved, saying, “Mr. Walsh and Mr. Dewhirst did not use the right judgment or scientific background to take a leadership role in navigating these events on behalf of a scientific bureau.”

The hope is that this episode has had no lasting effect on public confidence, and the NOAA employees interviewed seemed optimistic about that. As one of Birmingham’s forecasters put it: “I think at this point we’re ready to move forward…I think that’s the most important thing so we can get back to our jobs, protecting life and property.”