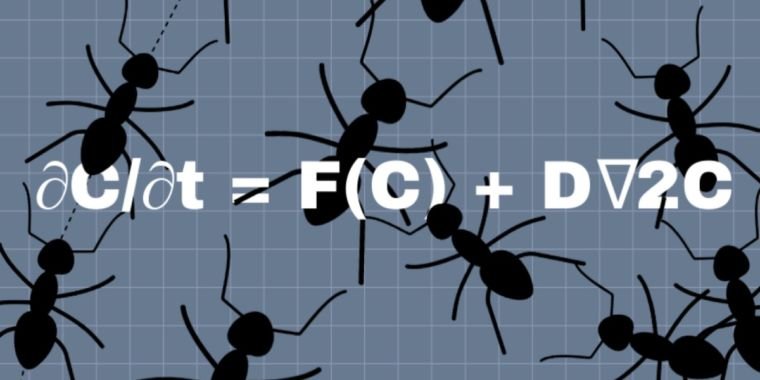 Azteca ants build their nests in shady trees and it is relatively common to find other nests in nearby trees. But these clusters of ant nests are often separated by large areas of shade trees where there are no nests at all. A December review article in BioScience by scientists at the University of Michigan argued that there is now substantial evidence that this unusual clustering is the result of the ants’ self-organizing behavior — not external factors such as temperature or humidity. In fact, the mechanism at work is strikingly similar to a process described by the late Alan Turing in a seminal 1952 paper.

Turing tried to understand how natural, non-random patterns arise (like a zebra’s stripes), and he focused on chemicals known as morphogens. He designed a mechanism that involves the interaction between an activating chemical and an inhibitory chemical that diffuse through a system, much like gas atoms do in a sealed box. The BioScience paper draws an analogy with injecting a drop of black ink into a beaker of water. Normally this would stabilize a system: the water would gradually turn an even gray. But if the inhibitor diffuses faster than the activator, the process is destabilized. That mechanism will produce a so-called “Turing pattern”: spots, stripes or, when applied to an ecological system, clusters of ant nests.

The authors of the BioScience article write:

Scientists have tried to apply this basic concept to many different types of systems. For example, neurons in the brain can serve as activators and inhibitors, depending on whether they amplify or muffle the firing of other nearby neurons — possibly why we see certain patterns when we hallucinate. There is evidence for Turing mechanisms at work in zebrafish stripes, the distance between hair follicles in mice, feather buds on a bird’s skin, the ridges on a mouse’s palate, as well as the numbers on a mouse’s leg. . And certain species of Mediterranean ants accumulate the dead bodies of ants in structures that appear to display Turing patterns. The challenge is to move from Turing’s admittedly simplified model to locating the precise mechanisms serving in the activator and inhibitor roles.

“The same equations Turing used for chemistry can be used in ecology,” said study co-author John Vandermeer, a University of Michigan ecologist. “Those equations say you have to get predators and prey into a system, and we’ve proven that you do.”

In principle, two processes acting as activator and inhibitor will produce periodic patterns and can be modeled using Turing’s diffusion function. For example, Vandermeer has discovered Turing-like features in how species are distributed in a particular ecological system, including predator-prey models.

Vandermeer has been studying Azteca ants and the ecology system of coffee plantations in general for over 20 years, noting that ant nests tended to form patterns while working in the field. One of Vandermeer’s graduate students had been researching parasitic phorid flies and realized the huge impact the fly had on the ants’ behavior.

“The predator was dispersed by the wind, so it had a relatively fast diffusion rate, compared to where the ant was,” he told Ars. “Biologically, we had a clear reaction-diffusion system.” In other words, they had the defining elements of a classic Turing mechanism.

Vandermeer and his colleagues mapped the distribution of shade trees with nests of Azteca ants on an organic coffee farm in Mexico — about 700 trees out of a total of between 7,000 and 11,000 trees in all. It’s a complicated ecosystem. For example, when phorid flies find a cluster of ant nests, they plant their eggs in the heads of ants. Those heads fall off once the larvae are fully developed, releasing new flies to go outside and find more ant hosts to implant.

That predator-prey relationship, the authors argue, is driving the emergence of ant nest clusters that are dispersed in a Turing pattern. The ant nests serve as the activator in this system, increasing in size and number while forming spatial clusters. This causes a corresponding increase in the population of flies, whose parasitic behavior acts as an inhibitor, decreasing the population of ants.

Complicating matters is that the ecosystem also includes a pest known as the green coffee scale and a predatory species of beetle (Azya orbigera) eating the shell. The Azteca ants, in turn, are motivated to protect the scale insects from the beetles, as the former are a food source for the ants. That combination ensures that the ecosystem maintains a delicate balance. For example, if the scales are so well protected by the ants that their numbers become too great, a white halo fungal disease can break out, decimating the scale insect population to restore balance.

“At a very local level, the predator and prey form an unstable relationship, while adding diffusion to the mix can lead to stabilization of the system,” the authors wrote.

There is also a disease called coffee rust, which is spread by wind spores. The same fungal disease that controls scale insects can also target coffee rust. But sometimes a coffee rust epidemic breaks out, like the one that devastated crops in Guatemala, Honduras and El Salvador in 2012. The likely cause: In previous years, according to Vandermeer, there has been gradual deforestation of the affected areas, turning much of the forest into grassland and disrupting the delicate balance of the ecosystem.

“It is a reasonable hypothesis to suggest that it was an indirect result of the gradual deforestation of the region leading to a critical transition, [such that] the disease suddenly turned into an epidemic,” said Vandermeer.

Said co-author Ivette Perfecto, also with the University of Michigan:

This is an important finding because it shows how organisms in nature are embedded in a complex web of interactions and therefore the simplistic “one pest, one natural enemy” pest management approach may not be the most appropriate method of pest management.” Rather, there is a need for a complex systems approach that takes into account nonlinearities and networks of interactions.

There is still a lot of skepticism among scientists about whether real Turing mechanisms are at work in natural systems. “Distinguishing between a Turing pattern and other patterning methods is not as easy in a large-scale system like this one,” Vandermeer admitted. “When you’re dealing with slime molds in a lab, you have a lot more control over the system.” Nevertheless, “My view is that Turing’s insight was so fundamental, that all the assumptions that fit his qualitative insight are present in nature. It just seems right.”