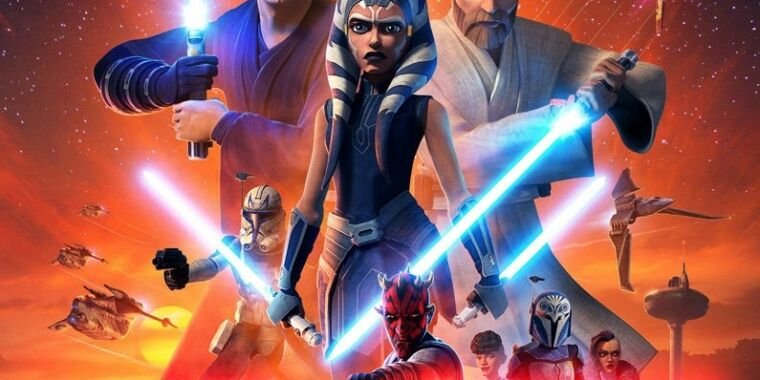 After a long way to The Clone WarsIn its final season, the animated series returns to wrap up a story that’s been more than a decade in the making. The opening episodes of the new season – which debuts exclusively on Disney+ on Friday, February 21 – are alternately exciting, funny and pretty much everything the live-action side of the series has ever been.

But appreciate how far The Clone Wars has traveled to get to this point is impossible without following the earlier steps of the series.

After cancellation, a return of familiar storylines

Minor plot spoilers for the entire series, and a preview of the plot of the new episodes, follow below†

The series started in 2008 and first aired on Cartoon Network before moving to Netflix and now showing on Disney+. The Clone Wars ran for six seasons, but unfortunately series creator Dave Filoni had planned to run eight so the show never came to an end, failing to create a closing for fan-favorite characters like Anakin Skywalker’s padawan , Ahsoka Tano (Ashley Eckstein), or clone trooper Captain Rex of the Great Army of the Republic (Dee Bradley Baker). Both Filoni and his characters moved on to Star Wars: Rebelsfilling in some of the blanks as a backstory, but it wasn’t the same.

Then, last December, The MandalorianThe twist ending provided the first solid link between the animated series and the live-action storylines. That made for the moment of this week The Clone Warsto bring in the viewership that has always deserved to be recognized as an equal of the live-action stories.

When the show was effectively canceled in 2014, its final storylines (of which there were reportedly a dozen) made their way through other mediums, such as a Dark Horse comic book miniseries, storyboard animatics, or in some cases presented at panels at the annual Star Wars show. celebration. These “unfinished stories” could have easily been left aside when Lucasfilm gave one final order Clone Wars season for Disney+. Instead, the final 12 episodes dive into some of those initially planned arcs.

The first of these arcs to get the full Disney+ treatment, as I found out in the first two episodes, is a story known informally as “The Bad Batch.” Of all the unproduced stories that Filoni and his company could have picked, it’s a smart choice. The story centers on Captain Rex, a protagonist since the 2008 TV movie. He teams up with Anakin Skywalker (Matt Lanter) on a mission to liberate the planet Anaxes from Admiral Trench, a naval commander of Harch who is on the side of the Confederacy of Independent Systems is fighting the Republic. During the fight, Rex discovers that one of his fellow clones, long believed to be dead, is being held hostage.

The “leave no soldier behind” mission that follows puts the “war” in Star Wars, something the live-action movies often leave to the imagination. While Rex may not be a familiar face to those just tuning in, he immediately establishes himself as a sympathetic commander, and the familiar military movie trope is a great jumping-off point for any Disney+ viewer jumping blind, even if the only faces they recognize are Anakin, Padme (Catherine Taber), Obi-Wan (James Arnold Taylor), and Mace Windu (Terrence Carson). For those who have seen the previous seasons and remember the sacrifice of the character who must save Rex, it is a moment of triumph to finally see him return after so many seasons.

Should we tell Wrecker about Order 66?

Also, we get a welcome and tasteful amount of comic relief from the Bad Batch characters in these early episodes. The name “Bad Batch” refers to Clone Force 99, a series of clones that all spawned with unintended mutations. These mutations make them a kind of super-soldiers, with their nicknames reflecting their talents: Wrecker, Tech, Crosshair, and so on. But the mutations also make the heroes socially awkward misfits, and the mission at times feels a bit like a lighthearted 80s comedy. The same traits that make them super soldiers are the ones that make it nearly impossible to live with (or to give orders). Expecting some dark plot lines, I welcomed the Bad Batch’s infusion of humor here, and they do double duty to ease new viewers into before the series starts to take harder emotional hits. For those in the know with their Star Wars lore, these clones that are now funny and heroic will suddenly turn into killer monsters when Order 66 is given, giving audiences one more chance to root for them before the show gets to that point. how complicated war can be.

Speaking of impending tragedy, if the trailers and interviews hadn’t just confirmed it, logic dictates that the season will eventually feature the infamous “Siege of Mandalore” story. One of the final battles of the Clone Wars, this story pits Ahsoka, the first female Jedi protagonist introduced in the Star Wars canon, against ex-Sith Lord Darth Maul as she and Captain Rex attempt to arrest him and face him. to bring justice. Not only will “Siege of Mandalore” tie in with the streaming service’s hit The Mandalorianbut it was also previously revealed that this story features Anakin and Ahsoka’s final farewell just before the events of Revenge of the Sith† (Eckstein famously cried the first time she heard it.) The novel, Ahsokaalso describes this adventure as climaxing with a duel between the Jedi heroine and Darth Maul, a fight that Filoni has promised “one of the best [duels]if not the best, we’ve ever done it.”

Star Wars: The Clone Wars has been a slow rehab of the Prequel era in its own way. This latest season seems to be pushing to complete that revival and bring in all those fans who missed the series the first time around. (You can only wish Disney+ would further help with that mission by putting the episodes in chronological order, rather than release order, but anyway Star Wars‘ official website has a handy guide.) But with few major genre releases on Disney+ between now and Marvel’s first series in August, this final season of The Clone Wars is another chance to bring in the audience. With the first episodes of Season 7, the show is putting its best foot forward to impress.