Climate: the science may be certain, the press coverage is not | Techilink 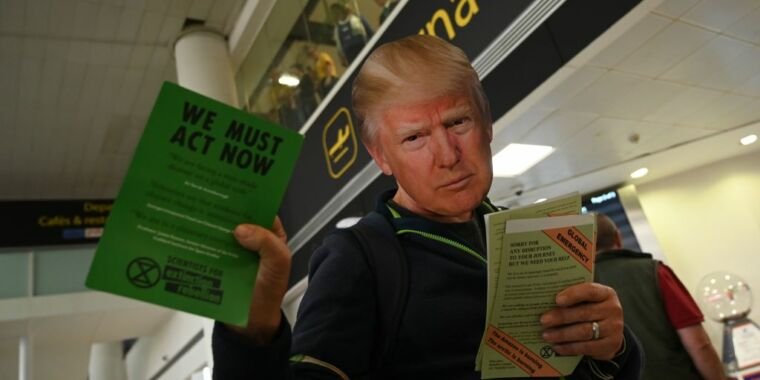 Much of the mainstream press has struggled with a desire to maintain what they believe to be objectivity in the face of scientific evidence. On things like evolution and climate change, major outlets have instead tried to strike a balance between two opposing sides. But this was so obviously problematic that John Oliver made fun of it, so we have to do better now, right?

Maybe not. New research from Rachel Wetts of Brown University suggests that major newspapers are still increasingly portraying the views of corporate interests and still overrepresenting people who don’t seem to accept the realities of climate change.

How do you measure who has the most influence on press coverage? There’s an entire industry devoted to exerting that influence: public relations. Among other things they do, PR people put together press releases that are intended (as their name implies) to get the attention of the press. So Wetts simply obtained about 1,800 press releases from a mix of organizations: corporations and trade groups, the government and public interest groups.

To find those who actually had influence, Wetts used a database of about 35,000 articles from three outlets: The New York Times, The Wall Street Journal, and USA Today. These cover the same time period as the press releases, from 1985 to 2014. Then anti-plagiarism software was used to pick up instances where some of the wording in the press release appeared in a news story. Wetts also scored these press releases on whether they agreed with the scientific consensus or not.

There are a few limitations in this approach. One is simply that 2014, while it set a record for the hottest year on record, has been eclipsed every year since — in some cases by a significant amount. This has helped to change the tone of public arguments, making most objections to science increasingly untenable. The type of coverage likely to appear in these papers has undoubtedly changed accordingly.

The other problem is that short text snippets would be enough to trigger a positive match of the software. It’s entirely possible that some of these presented an argument from a press release just to criticize it. Wetts acknowledges that possibility, but suggests that even those instances are an example of an organization successfully getting its ideas to the public — one of the goals of press releases.

Wetts had a set of hypotheses that she thought the data could address. One was the issue we mentioned earlier: Does the press’s desire to provide a balanced perspective lead to the use of material from organizations opposing action on climate change? But there were also some less obvious hypotheses, mostly centered on the coverage being driven by the civic power of the organization broadcasting the release. So, Wetts examined whether larger organizations used their words more often or whether wealthy companies or trade organizations had excessive influence.

The other two hypotheses she looked at related to the influence of stakeholders on climate change: industries that generate a lot of greenhouse gases and scientific organizations that provide data on the state of the climate.

The big picture shows that the mainstream press continued to suffer from some degree of false equilibrium over the period studied. Only 10 percent of the press releases selected by Wetts advocated action against climate change. But more than 18 percent of the press releases shared by these three newspapers had taken that position. Note that this means that a large majority of PR was in favor of action; it’s just that the small number of conflicting releases received attention that was disproportionate to the volume.

Now you might immediately suspect that The Wall Street Journal, which has an editorial page devoted to various forms of climate denial, could fuel that trend. But that was not the case; even The New York Times showed a similar pattern. If you thought that would change over time, the evidence has continued to pour in and has given us no reason to revise our conclusions on climate change. Still, Wetts found no evidence that things were changing over the course of her studies.

Furthermore, some of the hypotheses are easy to evaluate in the sense that they are wrong. For starters, it’s just not a question of money. There was no correlation between an organization’s assets or revenues and the tendency of the press to cover their publications. Companies in the extractive industries will not see the press releases more or less often. The same was true for educational institutions. Organizations that focus on scientific or technical services are actually fewer likely their PR will be picked up in these papers; less than three percent of their publications were echoed in the papers, compared to nearly 10 percent of organizations overall.

But two conditions seemed to matter. One is that corporations and corporate coalitions have been more successful in getting their press releases echoed in the newspapers. That effect was largely driven by large corporations or coalitions. Government agencies and advocacy groups saw the opposite effect: the smaller they were, the more likely their press releases would eventually grab attention in the news coverage. But the level that these organizations attracted fell short of the attention of companies.

It’s worth noting that a large number of companies are in favor of action on climate change and most press releases during this period also advocated action. And it’s fair to say that business interests greatly influence US policy, making their thoughts worthy of press coverage. The problem is that this focus is combined with a disproportionate focus on the minority perspective that opposes doing anything about the threat of climate change.

What the study could really use is something that an algorithm can’t do: a detailed look at how the shared text is used in press releases. Given the sheer volume of the data, it’s unreasonable to expect Wetts to be able to do this herself (I hope she gets some graduate students to sort out the problem). But it would also be good to streamline this system so that it could perform this type of analysis closer to real-time, which could help us identify problematic trends in journalism before they spiral out of control.