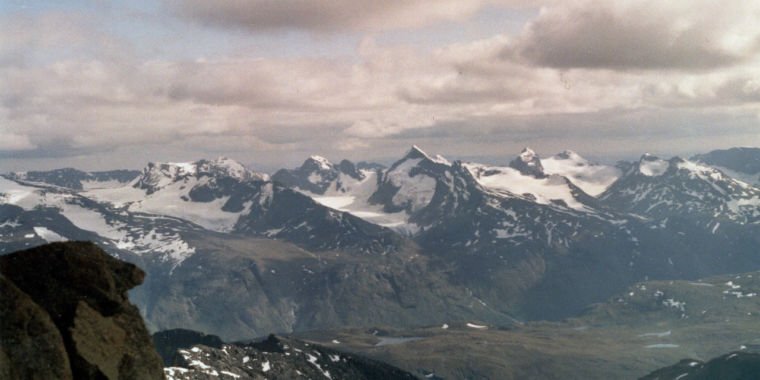 Ancient ice has preserved thousands of artifacts left behind by hunters and travelers in Norway’s highest mountain passes over the past 6,000 years. But even as rising temperatures reveal these artifacts for the first time, the disappearing ice is putting them at risk.

Far above the treeline in Norway’s highest mountains, ancient ice fields are shrinking as the Earth’s climate warms. As the ice disappears, it gives up the treasures it has kept in the cold store for the past 6,000 years: Neolithic arrows, Bronze Age clothing remnants, and skis of Viking Age merchants. And those artifacts have provided surprising insights into how ancient Norwegians made their living.

Organic materials such as wood, textiles and hides are relatively rare finds at archaeological sites – unless they are protected from the microorganisms that cause decay, they tend not to last. Extreme cold is a reliable way to keep artifacts relatively fresh for a few thousand years, but once thawed, these materials tend to break down quickly. With climate change shrinking ice cover around the world, glacial archaeologists are racing against time to find, preserve and study these newly revealed artifacts.

“If something as fragile as textiles melts, dries and is blown by the wind, it can be lost to science very quickly. Or an arrow can be exposed and covered again in a few weeks by the next snow and well preserved. The unpredictability means that the fieldwork, led by Lars Pilø of Oppland County Council, Norway, has to be well-timed and systematic,” said study co-author archaeologist James Barrett of the McDonald Institute for Archaeological Research at the University of Cambridge.

From 2006 to 2015, a team of archaeologists examined ice patches in Oppland, a province in southern central Norway that is home to some of the country’s tallest mountains. Reindeer once gathered in these icy patches in the later summer months to escape biting insects, and hunters followed from the late Stone Age through the Middle Ages. And trade routes ran through the mountain passes of Oppland, connecting settlements in Norway with the rest of Europe.

The slow but steady movement of glaciers tends to destroy everything at their base, so the team focused on stationary ice patches, usually above 1,400 meters. That ice is found amid fields of blocky frost-weathered boulders, fallen rocks and exposed rock buried beneath snow nine months a year.

“Field work is hard work – hiking with all our gear, often camping on permafrost – but very rewarding. [You’re] save archeology, bring more attention to the melting ice, discover a unique environmental history, and really connect with the natural environment,” Barrett said.

At the edges of the contracting ice sheets, archaeologists found more than 2,000 artifacts, forming a material record dating back to 4,000 BC. to the beginning of the Renaissance. Many of the artifacts are associated with reindeer hunting. Hunters would have easily lost arrows and “terror sticks” — poles of wooden flags that hunters would set up in rows to lead reindeer to waiting archers — and they often threw away broken bows instead of dragging them all the way home. Other items may have been used by hunters or traders traversing Oppland’s high mountain passes: universal items such as tools, skis, clothing, and horse harness, along with “incidental evidence of human travel,” or, in layman’s terms, “horse dung.”

History is hot and cold

Barrett and his colleagues radiocarbon dated 153 of the artifacts and compared those dates to the timing of major environmental changes in the region — such as periods of cooling or warming — and major social and economic shifts — such as agricultural settlement growth and dispersal. of international trade networks in the run-up to the Viking Age. They found that some periods had yielded many artifacts, indicating that people were quite active in the mountains at the time. But in other periods there were little or no signs of activity. The most surprising, according to Barrett, was the timing.

The Oppland mountains can be daunting terrain at the best of times, but during periods of extreme cold, glaciers can block the higher mountain passes and make travel in the upper reaches of the mountains more difficult. Archaeologists had expected humans to live at lower elevations during a time like the Late Antique Little Ice Age, a brief period of deeper-than-usual cold from about 536-600 CE.

But it turned out that hunters regularly ventured into the mountains, even as the climate got colder, based on the amount of gear they had apparently dropped there.

“Notably, however, ice finds continued throughout this period, perhaps suggesting that the importance of mountain hunting (mainly for reindeer) increased to supplement agricultural crop failures during times of low temperatures,” Barrett said. A colder turn in the Scandinavian climate would likely have led to widespread crop failure, so more people would have relied on hunting to make up for those losses.

“At times of increasing demand for mountain resources,” Barrett and his colleagues wrote, “activity probably continued despite adverse or variable climatic conditions.”

Hunting during the Viking Age

Many of the artifacts recovered by Barrett and his colleagues date back to the early Viking Age, the years 700 to 900 CE. Trade networks connecting Scandinavia to Europe and the Middle East expanded around this time. While we usually think of ships when we think of Scandinavian expansion, many trade goods traveled over land routes, such as the mountain passes of Oppland. And growing Norwegian cities, along with export markets, would have created a huge demand for hides and furs to fight the cold, as well as antlers to make useful items like combs. Business must have been good for the reindeer hunters.

“With settlement expansion, the potential and need to hunt at high altitudes and use mountain passes may only have increased,” the researchers wrote. And all that expansion, population growth, and trade took place during the Medieval Warm Period, when the Scandinavian climate was warmer than normal, which must have made life easier for Viking-era traders and hunters. The things they lost, discarded or otherwise left behind in the mountains offer a glimpse into the Viking Age, far from longships, looting and colonies – and a glimpse into the heart of the economic activity that supported that period of expansion.

Norway’s mountains probably still hide a lot of history – and prehistory – in remote ice patches. When Barrett and his colleagues looked at the data for their sample of 153 artifacts, they noticed a gap with almost no artifacts from about 3800 to 2200 BCE. Archaeological finds from that period, just at the end of the Stone Age, are even rare in all of Norway. The researchers say this could be because many of those artifacts have already been lost to ancient melts at lower elevations, while others are still frozen in the ice at higher elevations. That means archaeologists could extract some of those artifacts from receding ice in the coming decades.