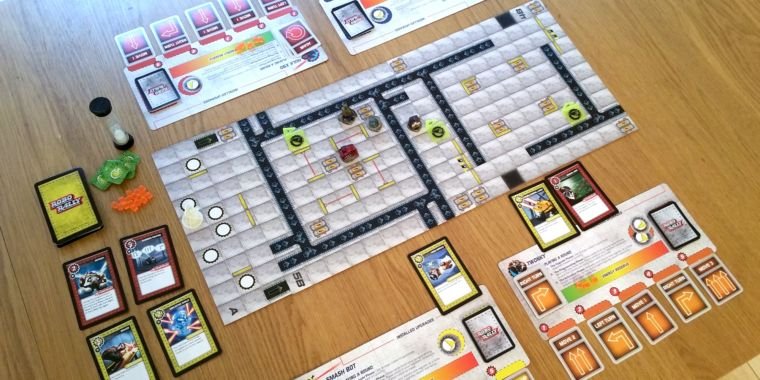 “This is the worst game I’ve ever played in my life.”

My friend spat the words out between gritted teeth with the kind of vehemence normally reserved for YouTube comment threads. I considered quitting the game, putting it away, and finding something less irritating to play instead. Then I looked around and saw the radiant grins on the faces of everyone else around the table.

Robo Rally, as it turns out, is a polarizing game because the main source of entertainment can be watching other players’ frustrations. It is also considered a classic. Designed by Richard Garfield of Magic: The Gathering fame and first published in 1994, Robo Rally was recently re-released by Hasbro in an updated version. The game puts players in control of industrial robots that compete in a race around a factory fraught with danger. Wall-mounted lasers bake anything that gets stuck in their path, conveyor belts drag robots hopelessly off course, and gaping gorges swallow anyone who teeters too close to the edge.

My aggrieved friend had become intimate with all three of these dangers. His robot had been knocked, zapped, bridged and otherwise abused from the first turn, and he had finally reached his breaking point.

But Robo Rally is not just a random engine for dishing out pain. At its core, the game is all about careful planning and making the best use of available resources to steadily move towards victory. Essentially, it’s about programming. You start the game armed with a personal deck of “order cards” that can command your robot to move forward or backward or turn left or right. After drawing nine of these cards in each round and choosing five to play, lay them down in order of execution. When everyone is ready, you each take turns taking your actions one at a time, moving your robot around the board trying to reach a series of checkpoints.

It sounds simple, but the game adds multiple elements of chaos to ensure that even the best-laid plans can go horribly wrong. In addition to the obstacles mentioned above, it is of course not uncommon to find yourself at the wrong end of the multiple of them over the course of a single round. And your robot rivals can unceremoniously push you across the board or zap you with lasers as they make their own way to the finish.

Time is also an issue. The first player to finish programming his or her robot in each round gets to flip a 30-second hourglass. All opponents who have not given all of their commands by the time it runs out are forced to randomly play cards from the top of their piles. The game will cause them to lose control of their droid and potentially cause massive headaches as they try to get back into the race.

Robo RallyThe most anarchic feature, however, is the assortment of damage cards, which you gain when you take dents and dents in the arena. These are added to your programming deck and have a variety of derailment effects, making your robot harder to control. One or two suits isn’t a problem – they just clutter your deck and give you less useful options to choose from during a round. But in the end you acquire enough that you have no choice but to play one or more commands as part of your sequence of commands, triggering their effects and forcing you to deal with the unpredictable consequences.

It’s not all bad news, though. For starters, you can use the arena itself to your advantage; hopping on a conveyor belt can catapult you to your next checkpoint. You can use your supply of energy cubes to buy upgrade cards to give your robot new abilities (this will be familiar to anyone who has played Garfield’s family-friendly monster battle game King of Tokyo). Charging stations dotted around the board give you the chance to gain extra energy, and different combinations of powers can be helpful as the game progresses.

Robo Rally is fun, challenging and, yes, frustrating. That means your enjoyment of the game probably depends on your ability to absorb setbacks. And it’s easy to see why certain types of players strongly and immediately dislike it.

But while some potential problems depend largely on the players’ personalities, others are harder to ignore.

for one thing, Robo Rally‘s physical design is problematic. It comes with six painted plastic miniature robots, and while they aren’t spectacular, they are cute and full of personality. However, the modular board segments are another matter. The dull, repetitive expanse of metallic gray floor tiles is about as visually appealing as a game minesweeper. Then there are the player boards and punch-out tokens, which are printed on the thinnest card stock I’ve ever seen in a game.

While Robo Rally was arguably the first game to popularize the idea of ​​”programming” actions, it has been surpassed by later releases that have adopted and developed the concept. Just like the card game lordship introduced the concept of deckbuilding and gave rise to numerous other games that put their own spin on the formula, Robo Rally has been overtaken, particularly in 2016 Mechs vs Minions. This one League of Legendsthemed game takes the idea of ​​a programmed sequence of quests and adapts it for cooperative play, while adding an engaging storyline, more variety in the scenarios, and a stunning level of presentation. (Ars’ own Sam Machovech recently reviewed Mechs vs Minions and found it lacking; I enjoyed it much more.)

To compare Robo Rally until Mechs vs Minions may seem unfair. In the next 20 years Robo Rally was first released, board games have seen extraordinary creative growth. The new version of Robo Rally has some significant changes, most notably the removal of player elimination. But while there’s fun to be had in the mix of deliberate planning and frenetic laser-induced panic, it often feels clunky by 21st century standards. Robo Rally is definitely showing its age, and right now its biggest draw is probably nostalgia.