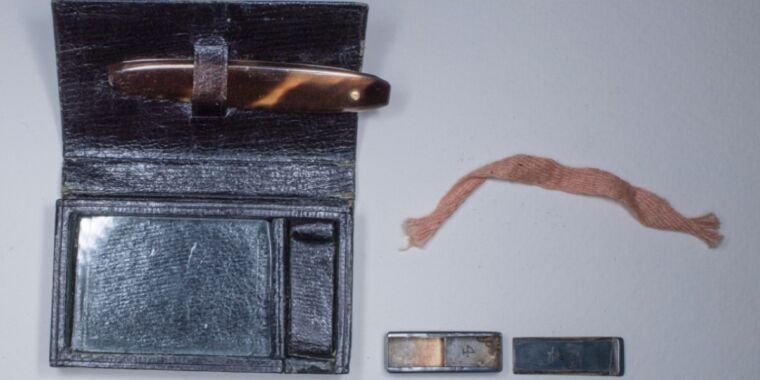 Scientists around the world are currently working frantically to develop an effective vaccine against COVID-19 to contain the global pandemic that has claimed nearly 600,000 lives worldwide. Meanwhile, a collaboration between scientists from McMaster University, the University of Sydney and historians at the Mütter Museum in Philadelphia looks to the past for possible clues. They analyzed the genome of fragments of the smallpox virus used in vaccines during the Civil War, according to a new paper published in the journal Genome Biology.

“Understanding the history, evolution and ways in which these viruses can function as vaccines is extremely important in our day and age,” said evolutionary geneticist Hendrik Poinar, director of the McMaster Ancient DNA Center, of the rationale behind the research. “This work highlights the importance of looking at the diversity of these vaccine strains found in the wild. We don’t know how much can provide cross-protection against a wide variety of viruses, such as the flu or coronaviruses.”

The World Health Organization declared smallpox an eradicated disease in 1979, and many people don’t remember how devastating it could be. It started with a high fever and severe vomiting, followed by a skin rash. The victim would then develop sores, which eventually crusted over and fell off, scarring the skin. About three in ten of those infected died, and the survivors usually had severe scars for life, sometimes even blind or permanently disabled.

The Chinese inoculated people against smallpox as early as the 16th century. European physicians in the early 1700s relied on variolation (the use of smallpox to induce immunity) to control the spread of smallpox, in which scrapes from smallpox pustules were scratched into a person’s arm or inhaled through the nose. While those who received the treatment developed common smallpox symptoms such as fever and rash, the death toll was significantly lower.

By the late 1700s, a handful of doctors in England and Germany noted that people infected with the milder cowpox appeared to be immune to smallpox, and there were a few early human vaccination tests. For example, in 1774, a farmer in Dorset, England, named Benjamin Jesty, successfully vaccinated his wife and children with cowpox. But it was English physician Edward Jenner who brought the smallpox vaccine into mainstream medical practice.

Jenner had also noticed that milkmaids infected with cowpox were largely immune to smallpox. So, on May 14, 1796, he scraped the pus from cowpox blisters on the hands of a milkmaid named Sarah Nelmes. (The skin of the cow, Blossom, which gave Nelmes cowpox, is on display in the library of St. George’s Medical School.) Then he inoculated a young boy named James Phipps (his gardener’s son) with the abrasions, which resulted in low-grade fever, but not full-blown disease. He then exposed the boy to the variola virus several times, but the young Phipps never developed smallpox. Jenner tested his method on 23 other subjects (including his one-year-old son Robert) before publishing his findings. In 1840, the British government had banned variolation and provided free cowpox vaccinations to the general population.

During the American Civil War (1861-1865), smallpox proved to be a scourge that plagued both Union and Confederate troops. In addition to quarantines and the burning of contaminated clothing and blankets, soldiers on both sides of the conflict had to be vaccinated against smallpox to stop the spread of the disease. In reality, the demand was often ignored in the rush to recruit new soldiers, though it still helped curb deadly outbreaks and led to widespread smallpox vaccination of American citizens after the war. Crusts were usually harvested from cowpox scabs from infected children, soldiers, even the cows themselves, and sent to army surgeons. (In one notable case, a scab was collected from a young woman in ill repute who was also infected with syphilis, spreading the STD among the soldiers inoculated with that material.)

According to the authors of this latest study, Philadelphia was the second largest hospital city serving the influx of sick and wounded soldiers. A veritable mecca for the morbidly curious, the Mütter Museum was established in 1863 to house the various medical artifacts and specimens for research and education, including smallpox vaccination kits and related instruments. The latter included collapsible lancets, small glass plates for mixing liquids, and tin boxes to store crust material. The museum provided five vaccination kits dating to the mid to late 1800s for the study. Four sets were of the leather roll-up variant; the fifth contained a device known as an “automatic vaccinator.”

The scientists collected nine copies of virus fragments from the five kits and then reconstructed and analyzed their genomes. (They were even able to recover viral fragments by non-destructive sampling of the artifacts that showed no obvious sign of biological residue.) The aim was to outline the evolutionary relationships of smallpox viruses used in Civil War vaccines within the United States. class of poxviruses As a whole.

The results showed that a particular strain of the virus (VACV) was circulating before the 20th century and was closely related to a commercially produced vaccine strain manufactured in Philadelphia in 1902. In other words, there was very little diversity among the strains commonly used by physicians in the area during the Civil War, despite the lack of standardization of vaccines for over a century.

In addition, the vaccinia strains then used for vaccination were distantly related to the virus that causes smallpox. The authors argue that their low mutation rate is why they provide protection against smallpox. That gives a useful clue as to how close a vaccine, evolutionarily speaking, must be to the virus that causes disease to be effective at preventing disease.

The researchers also noted similarities between the kit’s construction — which were custom (customized) and not available in catalogs at the time — and their contents. “There was a common wisdom about how vaccination was applied in this particular era,” they concluded. “Indeed, the similarity in the virus strains, not just of these five Civil War era kits, but of the 1902 strain…suggests that there may have been a common source for material in the Philadelphia area.”

The authors believe their work points the way to a new non-destructive approach to studying medical history. “Vaccination is a wonderful process with a rich medical history that we should celebrate,” said study co-author Ana Duggan, now with the Public Health Agency of Canada. “Medical museums are incredible repositories of our past and of our collective history. The new tools we develop in this work allow us to explore how medical resources, procedures and techniques have changed over time.”