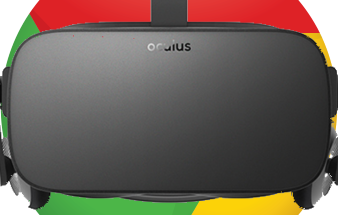 The ongoing virtual reality battles aren’t just fought on the hardware side. Software companies play a big role for the platform, especially those who create 3D engines, which game and app makers rely heavily on to help them create optimized content that looks and runs at a sharp refresh rate of 90 frames per second. second.

While Unity and Unreal have made most of the headlines about VR 3D engines, Google may have a surprising game-changer on its hands: the Chrome web browser.

A Wednesday report from Road to VR surfaced in a speech by Google software engineer Boris Smus in late April, and that speech stood out for highlighting the Chrome team’s efforts to finally support 90 frames per second refresh for systems like the HTC Vive and Oculus Rift. Until recently, the burgeoning WebVR platform was limited to 60 FPS, which does not reach the necessary visual smoothness threshold needed to ensure comfort for VR users.

Of course, the fact that scrolling text and content renders a few frames faster on your favorite 2D sites won’t set the VR industry on fire, but the WebVR platform is another matter. Until Unity or other engines announce a simple path to enable browser-based distribution of VR executables, WebVR is poised to be the most solid way to get VR experiences up and running in Chrome. allowing use on the HTC Vive and the Oculus Rift should developers wish to support one or both. Smus specifically showed off a running Chrome demo that recognized the HTC Vive’s motion-controlled hand controllers while displaying the visuals at the full 90 FPS refresh, and the demo included full room-scale tracking, as opposed to limited, pseudo-VR content like seen in 360 degree videos.

Of course, the feasibility of WebVR and Chrome as an optimized engine remains to be seen, especially since the updates required for the higher refresh rate have yet to be rolled out between different Chrome builds. There’s also the glaring problem that content creators don’t necessarily want to move from programming languages ​​like C# to Javascript. But for ease of access and skipping distribution channels like Steam and the Oculus Store, Chrome clearly has a leg up on the competition.

But Smus’ insistence that the platform is “good enough to implement real stuff” is certainly intriguing, and for VR content creators opting for simpler textures and other rudimentary graphics options, like the ones that work on weaker platforms like Samsung GearVR , the platform may prove very well suited and provide a neater distribution path for experimental and movie-like content.