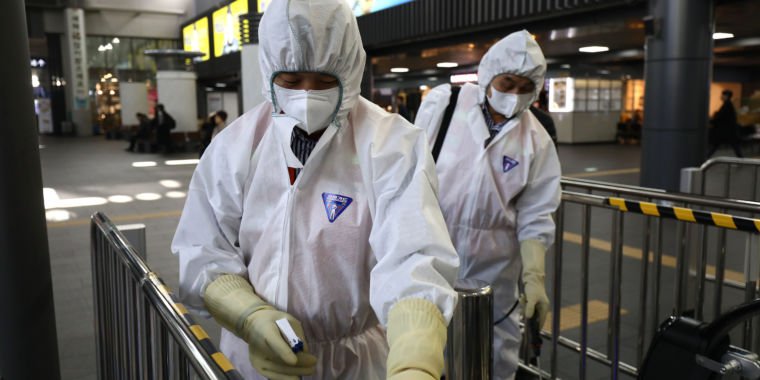 An outbreak of an unprecedented coronavirus continued to escalate dramatically in China this week, with cases rising to 800 and 26 deaths reported by Chinese health officials.

To contain the spread of disease, China has issued travel restrictions in the central city of Wuhan, where the outbreak broke out late last month, as well as in many nearby cities, including Huanggang, Ezhou, Zhijiang and Chibi. Hundreds of flights have been canceled and train, bus and metro services have been suspended. Collectively, travel restrictions and frozen public transport have now trapped an estimated 35 million residents in the region.

So far, all deaths from the outbreak and nearly all cases have been in China, but the viral illness has cropped up in travelers in several other countries. That includes Japan, South Korea, Thailand and the US.

This morning (Jan. 24), the US Centers for Disease Control and Prevention confirmed that a second US case has been identified in Chicago. The case is a woman in her 60s who had recently traveled to Wuhan. She is reportedly doing well and is in stable condition at a local hospital. She is being kept in hospital mainly for quarantine purposes, officials said.

The first US case was identified in Washington state on January 21. The CDC reported this morning that officials have been closely monitoring people who have had contact with that patient from Washington, and so far no one has shown any signs of infection. Public health officials in Chicago are now identifying and monitoring people who had contact with the second patient.

The US – and countries around the world – have stepped up surveillance of travelers from Wuhan. Airline passengers arriving in the US from Wuhan are routed to five US airports (San Francisco (SFO), New York (JFK), Los Angeles (LAX), Atlanta (ATL) and Chicago (ORD)) where they are screened, on look for fever and other symptoms.

In both confirmed US cases, the travelers arrived in the US prior to the screening and had no symptoms while traveling. The current rough estimate for the virus’s incubation period — that is, from exposure to onset of symptoms — is two weeks.

The rapid increase in the severity and scope of the outbreak has fueled fears of a devastating pandemic and revived memories of the deadly outbreak of SARS (Severe Acute Respiratory Syndrome) in 2003, which was also caused by a coronavirus. But health officials who closely monitor epidemiological data have found that the outlook is far less bleak so far.

On Thursday, an emergency committee convened by the World Health Organization determined that the outbreak does not yet constitute a “public health emergency of international concern”.

“Make no mistake. This is an emergency in China,” WHO Director General Dr Tedros Adhanom Ghebreyesus said at a news conference. “But it has not yet become a global health emergency.”

However, the committee will meet again in the coming days to reassess. and dr. Tedros (who bears his first name) added that “it could turn into a global emergency”.

Likewise, the CDC said this morning that while the situation is evolving rapidly, the risk to the U.S. population is currently low.

There are some key features of this outbreak that led to those findings and offered some solace to public health experts. For starters, most illnesses so far have been mild. And the reported deaths related to the outbreak were mainly in older individuals with underlying health conditions, such as diabetes and cardiovascular disease.

While person-to-person transmission of the virus has been confirmed, WHO officials say the virus appears to jump mainly between people who have had close contact — that is, relatives and medical staff, not let’s say people passing by in public settings. like an airport.

The mild cases and limited transmission so far are hopeful signs that the outbreak can be contained and that the death toll will remain low.

That said, with new viruses like this one — which have likely jumped from animal to human in a live animal market in Wuhan — the virus could continue to evolve and the situation could change quickly.

For that reason, the WHO and the CDC are “putting caution to the side” and taking the situation very seriously.

There are also many things we don’t yet know about the coronavirus, including where it comes from, how easily it can spread from person to person, and the full scope of the clinical features of those infected.

Coronaviruses are a large family of viruses that can cause everything from mild to deadly infections in humans and a variety of animals. Several coronaviruses are already regularly circulating in humans, causing common respiratory illnesses that are mild to moderate. There are also the infamous members of the family that cause deadly infections, including one strain that causes SARS and one that causes MERS (Middle East Respiratory Syndrome).

Because the new virus can cause relatively mild respiratory infections, it’s possible — if not likely — that cases may have gone undetected, especially since the outbreak originated during the cold and flu season. The new virus can cause inconspicuous respiratory symptoms, including fever, cough, chest tightness and difficulty breathing. Mild cases can be easily mistaken for the flu or the common cold, including cases caused by established coronaviruses.

According to the CDC, flu activity is currently high in the US. So far, the agency estimates that flu has caused 15 million to 21 million illnesses this season, resulting in up to 250,000 hospitalizations and 20,000 deaths — in the US alone.

While the WHO and others have made preliminary estimates of the transmission rate of the novel coronavirus virus, those early estimates may be far off given the uncertainty of the number of cases and clinical features of the diseases.

For now, WHO officials expect the number of cases to continue to rise. The CDC said it fully expects several more cases to be discovered in the US and that the infection could spread to travelers’ close contacts on US soil.

The CDC recommends people avoid unnecessary travel to Wuhan and adhere to standard hygiene practices, such as washing your hands regularly and covering your mouth and nose when you cough or sneeze.