Check out the genes on this huge magic mushroom | Techilink 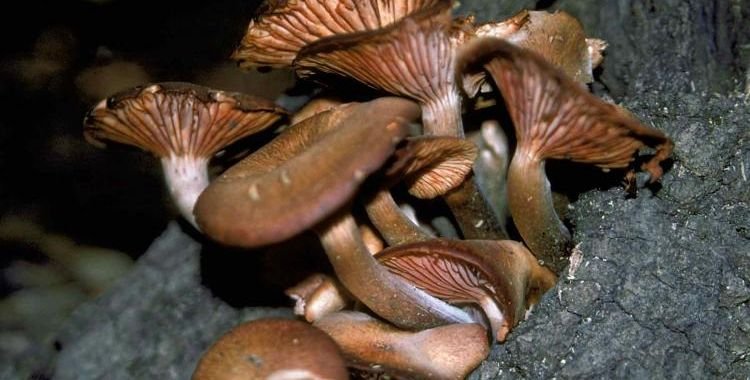 As is the case with most titles ending in ‘-est’, the battle for the world’s largest organism is fierce. The Great Barrier Reef certainly has its supporters, most of them Australian. There’s a group of quaking aspens growing in Utah that are a single clonal organism, rather than genetic individuals. If it doesn’t deserve the title of largest organism, it can at least claim to be the most Borg-like.

The true winner doesn’t capture the popular imagination as much as a besieged coral or a forest of yellow-leaved trees: it’s slightly less pretty and unlikely to appear as the background of an inspirational poster anytime soon. It kills plants and lives underground, in Oregon. It’s the giant fungus and we now have its genome.

Armillaria species – honey agarics – kill all types of plants. Conifers, ginkgos, grasses and shrubs, in National Forests and in your backyard; they are all susceptible. The fungus attacks its prey by emitting rhizomorphs, underground structures that leech into the plant’s roots, killing them. Then it eats the dead woody tissue of its decomposing host.

As for the agricultural implications of a fungus attacking plants below ground, scientists thought we might need to learn more about how and why it does what it does. So they determined the genomes of four Armillaria species and compared them with those of twenty-two related fungi.

It turns out Armillaria have an inordinate number of genes that code for enzymes to break down plant cell walls, as well as other genes that control pathogenicity. Most of these genes arose through gene duplication, rather than through transposable elements (genes that jump from one location to another). This is surprising, as genome expansion in other plant pathogens is driven by transposon proliferation.

The rhizomorphs are unique to this Armillaria and let them grow so large by bridging the distances between potential host plants. However, their development, morphology and even function are still under debate. The genes they express turned out to be unique and evolutionarily quite young, but all four Armillaria species studied had them (thus assumed to be important).

Rhizomorphs express some proteins that break down plant cell walls, but not as many as the branched part of the fungus, which is where the mushrooms come from. This supports the speculation that the rhizomorphs not only attack new hosts, but can also absorb and transport nutrients.

So this is when the genome gives a hint of what enabled an organism to develop such a distinctive lifestyle. But since all genes are unique, they don’t give us a clear picture.