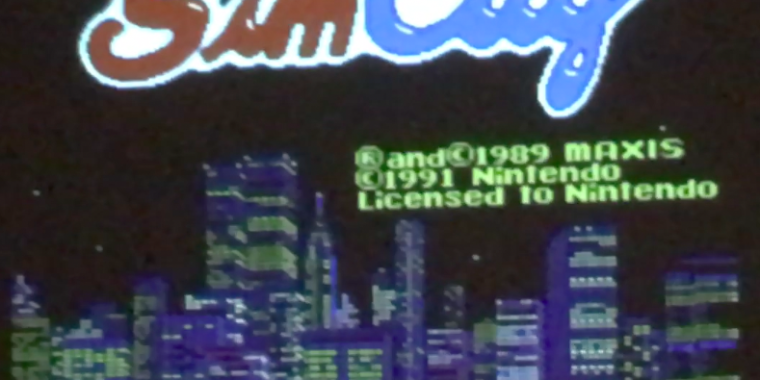 Gamers of a certain age probably remember when Nintendo teamed up with Maxis to create a version of the groundbreaking SimCity to the brand new SNES in 1991. What most gamers probably don’t realize is that an NES version of the game was being developed at the same time and was canceled just before its scheduled release.

That version of the game was considered lost for decades until two prototype cartridges surfaced in the collecting community last year. One of those prototypes has now been obtained and preserved by Frank Cifaldi of the Video Game History Foundation (VGHF), who first publicly demonstrated the emulated ROM at MAGFest last weekend.

From lost to found

As Cifaldi told, the story of the NES SimCity started when legendary Nintendo designer Shigeru Miyamoto said he had an idea for a game where you build and maintain an entire city. After hearing a similar game on PC and trying SimCity for himself, Miyamoto was impressed enough to get Nintendo to buy the console rights to the game, rather than try to make a competing title.

Nintendo has announced the NES and SNES versions of SimCity in late 1990, when the NES version got a Nintendo Power preview (complete with two screenshots) promising a spring 1991 release date. The NES version was subsequently shown at the 1991 Winter Consumer Electronics Show, as evidenced by contemporaneous footage from the insufferable syndicated show Video Powerhosted by the equally insufferable Johnny Arcade.

While the SNES version of SimCity was released in August 1991, the NES version was summarily canceled and would not be heard from for over 15 years. That’s when a 2006 issue of Nintendo power mentioned that editor-in-chief Scott Pelland had a gold prototype cartridge still in development on his desk.

Fast forward to last August, when the owner of Seattle retro game store Back in Time, who goes by BigDaddyRamirez online, reported that two copies of the lost prototype had walked through the door. A Nintendo employee had apparently taken the long-forgotten prototypes from the company’s offices; as Cifaldi later put it, when a lost game is found and saved, “99% of the time it is done by corporate theft.”

A short demonstration video posted at the time proved the prototypes were in good condition. The demo also emphasized very basic gameplay functionality. Back in Time then displayed the cartridges in a booth at Portland Retro Game Expo in October, where the carts were eventually auctioned off to the highest bidder.

Pat “The NES Punk” Contri recalled that auction in a recent podcast, saying that at some point it looked like the prototype would effectively be lost to history again.

“There was a chance that the game wouldn’t be dumped – that someone would buy both for an insane amount and lock both SimCity carts away,” Contri said. “Which would potentially mean no one would have access to the ROM, which of course would be terrible.”

Happy, game collector Steve Lin was able to make what Contri called “a substantial purchase” to secure one of the prototypes, which was then dumped and kept as a ROM file by Cifaldi’s Video Game History Foundation. On the NES Punk podcast, collector Ian Ferguson recalls the moment he and Cifaldi first loaded the ROM. “That was original NES title music that we haven’t heard yet,” he said in awe. “That’s a nice title screen… We were enjoying it for a while.”

While Cifaldi is still working on a full analysis and description of the prototype, last weekend he showed the emulated ROM file on a MAGFest panel on the status of lost NES games. As you can see in the video above, the game is quite similar to the SNES release, right down to green-haired advisor Dr. Wright (a Nintendo creation and tribute to SimCity creator Will Wright).

The NES version even includes the same out-of-the-box scenarios that appeared in the SNES version, including a nuclear meltdown in Boston in the distant future year 2010(!). The biggest immediate difference is in the Monster Attack disaster, which uses a generic purple monster instead of the Bowser cameo found in the SNES version.

Cifaldi also said features such as nuclear meltdowns and boats were not fully coded for the NES prototype. And at some points, Cifaldi points out that “the NES really struggles with its calculations. See how nothing has power? That’s because it’s still doing math behind the scenes to figure out which buildings have power… it’s not an easy one.” calculation for a system like the NES.”

That delay could help explain why the NES version was eventually dropped, or it could be a sign of an early version that would have worked just fine with a little more polish. Nintendo could very well have canned the NES port to avoid creating more competition for the brand new SNES as well.

Whether the VGHF or another owner will release the prototype ROM publicly is still unclear. Regardless, the version now preserved by the Foundation ensures that this rarity in gaming history will be accessible to historians and researchers at least well into the future.