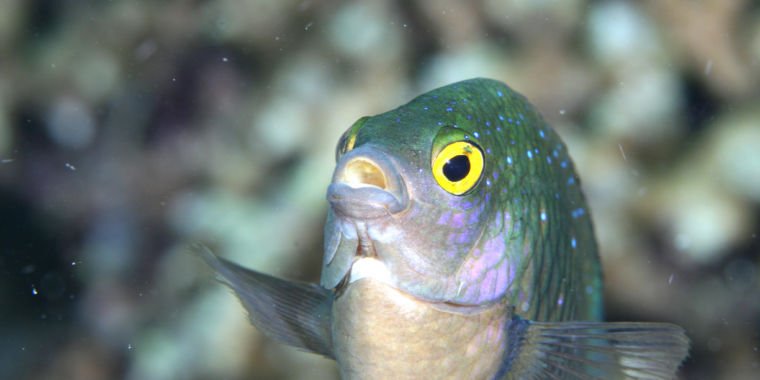 In the academic equivalent of “shots fired,” a newly published paper evaluates some previous studies on the effects of ocean acidification on fish — and finds it can’t replicate any of the results.

In recent years, a number of studies have experimented with the behavior of coral fish in normal and high CO2 water. (Increasing dissolved CO2– which happens as a result of man-made emissions – lowers the pH of seawater, hence the term “acidification”.) These studies have found some surprising effects, from not recognizing and avoiding a predator’s scent to a loss of “handedness” (preference for left or right turns) during development. These behaviors have been associated with CO2 interfere with a specific receptor in the brain.

But a group of researchers was skeptical of these results and devised a plan to replicate them in a standardized experimental setup. Over several years, the researchers repeated some of these experiments with a variety of fish species, carefully documenting and filming each step to create an accessible database of results. And those results seem distinctly different.

One experiment examined the activity level of 582 fish from six species, using tracking software and video to measure distance moved. In the first tests, two species showed at least some activity increase in high CO2 water, ranging from 50 to 90 percent. However, follow-up tests with different fish of those species showed no increase. There was a lot of individual variability, so testing with too few individuals could yield results that are not representative.

The story for “handedness” experiments was similar. In a small “maze” with T-shaped intersections, the researchers measured the number of left and right turns using 400 fish of five species. Three species showed no signs of handedness in either normal or high CO2 water. Two species did well in the normal water, with one showing reduced dexterity in the high CO2 water. When some of those fish were tested again a week later, the effect disappeared.

Finally, there were tests where a predator’s scent was added to one part of the aquarium and measured how long the fish spent inside or outside that part. These experiments were done with a comparable sample of six species. In contrast to previous studies, the researchers only saw an effect in one species. This was true for captive-bred juveniles, but a second test with wild-caught individuals of different ages showed no effect.

And this is where the new paper gets a little spicy. For the other experiments, the authors conclude that small sample size and large individual variability may explain the different results observed in previously published studies. But they say the previous predatory scent experiments had much stronger effects with much lower individual variability.

Because they ran slightly longer experiments (about 20 minutes instead of 10), the researchers cropped their data and extracted 10,000 combinations of data points to simulate experiments with smaller sample sizes. They were given zero data sets that match the large effect and small variability of previous studies.

“Inter-individual variation,” they write, “enables the survival of populations and species and is a fundamental biological phenomenon upon which selection acts; results that show negligible variation (particularly for behaviors that are inherently variable) must match the be viewed with caution.”

Ars reached out to Danielle Dixson, one of a number of researchers behind the predator scent experiments (including one we’d discussed), for her thoughts on the new paper.

Unsurprisingly, the experimental findings of Clark et al. differ from the studies we have collected in the past because some methodological changes were made and therefore a direct comparison between the studies is not appropriate. The Clark study used different fish species at different life stages (adult/sub-adult compared to larvae or very early juveniles) or one juvenile fish species collected from a public aquarium (compared to naive lab-wide or light trap collected). This change alone required different equipment, a different experimental setup, and means that animals tested had different experiences and exposure to the chemical signals than in previous work.

Dixson said other studies had previously confirmed their findings, adding: “As technology and our understanding of the subject has advanced, so have the predictions of community-wide implications.2 on a coral reef dampens the impact of CO2 in fish behavior compared to initial studies[…] Our goal in 2009 was to shed light on this important topic, and we continue to support other scientists interested in advancing climate change research on coral reefs.”

Aside from stirring the pot, the new study clouds the water a bit by showing that the effects on fish are at least more complex than they seemed in the past. coral reef fish to do have more to worry about than just the direct biological effects of ocean acidification, between impacts at the base of the food web, warming water and reef bleaching. Still, any positive news is welcome.