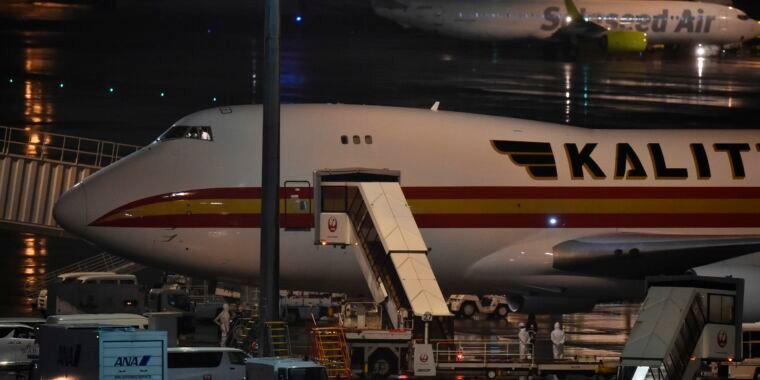 Health officials at the US Centers for Disease Control and Prevention didn’t want 14 people who tested positive for the new coronavirus to be flown back to the US, along with hundreds of other uninfected people — but the CDC experts were overruled by officials from the U.S. US State Department, according to a report by The Washington Post.

On Sunday, February 16, the 14 positive people flew from Japan to the US on State Department chartered aircraft. They included more than 300 others, all evacuees from the luxury cruise ship, the… Diamond Princesswho had an explosive outbreak of COVID-19 cases.

The cruise ship, which initially had 3,711 passengers and crew on board, had been quarantined in Yokohama, Japan since Feb. 3, after a former passenger tested positive on Feb. 1. steadily climbed during the 14-day incarceration. Even in recent days, health officials in Japan reported dozens of new cases.

On Friday, February 21, after the initial quarantine was lifted on the 19th and hundreds of passengers and crew were allowed to disembark, the outbreak on the ship reached 634 cases. It is by far the largest cluster of cases outside of China, accounting for about half of all cases outside the hard-hit country.

But the failure of the quarantine had long been apparent. On Saturday, February 15, US officials announced they would be evacuating Americans. “In order to fulfill our responsibilities to American citizens and to reduce pressure on Japan’s health care system, the United States government is recommending that American citizens disembark and return to the United States for further monitoring,” the CDC said in a statement. .

The agency made it clear that only the uninfected would be allowed to fly back. “All travelers from Japan will be screened before boarding the State Department chartered plane to prevent symptomatic travelers from leaving Japan,” the CDC said.

But in a last minute twist, that all changed. As US evacuees were crammed into buses idling on an airport tarmac in Japan, officials received the results of coronavirus tests conducted a few days earlier: 14 of the people on the buses tested positive. A fierce debate erupted in Washington, DC, according to the Post, which spoke to unnamed senior US officials involved in the decision.

CDC deputy director Anne Schuchat has reportedly advocated not letting them board the plane. She expressed concern about infection control, noting that the agency had already assured the cruise ship’s weary passengers that they would not be evacuated with anyone who had tested positive for the virus or showed symptoms of COVID-19.

Anthony Fauci, head of the National Institute of Allergy and Infectious Diseases, reportedly supported the position, noting that the concerns were valid and should be considered.

But Robert Kadlec, assistant secretary for preparedness and response for the Department of Health and Human Services, advocated letting them fly. He noted that the evacuation plane, two Boeing 747s, was already equipped with infectious disease doctors and areas enclosed by 10-foot-high plastic walls to hold back infected passengers.

The US State Department eventually made the decision to allow the infected passengers to return to the US by plane.

Afterward, CDC officials urged that references to the agency be erased from all statements about the decision. According to the message:

“CDC has weighed in on this and explicitly advised against it,” Schuchat wrote on behalf of the officials, according to an HHS official who saw the email and shared the language. ask what our advice was.” She wrote that the infected passengers could pose “an increased risk to the other passengers”.

According to the Post’s report, some of the evacuated passengers were not aware that infected people were on board the plane until their arrival in the US.

“We were upset that people were knowingly put on the plane who were positive,” a passenger told the Post from a military base where she and her husband are under federal quarantine. “I think those people shouldn’t have been on the plane,” she continued. “They should have been transferred to medical facilities in Japan. We feel like we’ve been exposed again. We were very upset about that.”

In a news conference Friday, Nancy Messonnier, director of CDC’s National Center for Immunization and Respiratory Diseases, said there are now 21 confirmed cases of COVID-19 in the U.S. among repatriated people, 18 of which are from the United States. Diamond Princess† dr. Messonnier said it is unclear if any of the evacuees from the… Diamond Princess were infected during the flight.

Those 21 cases are in addition to 13 other confirmed cases in the US involving people who were not repatriated.

At the time of publication, there are 76,785 cases of COVID-19 worldwide, with 2,249 deaths, according to the World Health Organization. The vast majority of cases and deaths occur in China. About 1,200 cases outside of China are spread across 27 countries and the Diamond Princess†