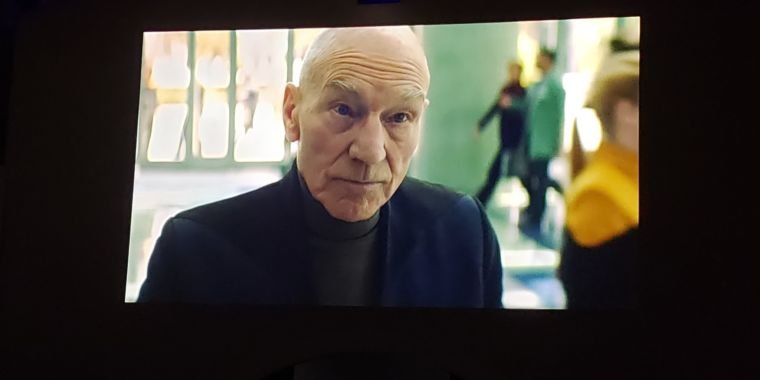 We now have our first look at Patrick Stewart in character as Star Trek: The Next Generation‘s Jean-Luc Picard since the movie Star Trek: Nemesis back in 2002.

The image is a photo of a music video shown during CBS’s Upfronts presentation. Upfronts are hosted by TV networks like CBS to show off the next season’s series of shows, mainly to advertisers, but sometimes to print. Press and advertising professionals who attended the event shared the details on Twitter. The image itself was shared by Kate Aurthur, Buzzfeed’s chief correspondent in Los Angeles.

Pittsburgh Post-Gazette TV Reviewer Rob Owen described the short scene in a tweet, where he wrote that in the clip “a Starfleet officer asked Jean-Luc, ‘Can I have your name please, sir?’ if Picard seems incredulous.”

The clip was short, and fans wanting to learn more about the series won’t whole a lot to work from. That said, TrekMovie speculates that Picard may be a professor or instructor at Starfleet Academy. The reasoning: Picard “looks quite professorial,” even though he’s not in a Starfleet uniform, and the uniform you can barely see in the background is very similar to that worn by cadets in training in episodes like “The First Duty.” “.

We know very little about the show, as the series’ director made it clear in interviews that CBS wants to keep as much secret as possible. Here’s what we have so far: The series will premiere at the end of 2019, the first season will consist of 10 episodes, it will take place 18 years later Star Trek: Nemesisand it implies that Picard broke the news of Romulus’ destruction in the Prime timeline in the 2009 Star Trek movie.

More details are likely to appear at San Diego Comic-Con in July. For now, CBS confirmed Star Trek: Picard will premiere on CBS All Access in the United States, The Space Channel in Canada, and Amazon Prime Video in 200 other countries. †Star Trek: Discovery is also exclusive to CBS All Access in the United States, but is distributed by Netflix in most other countries).