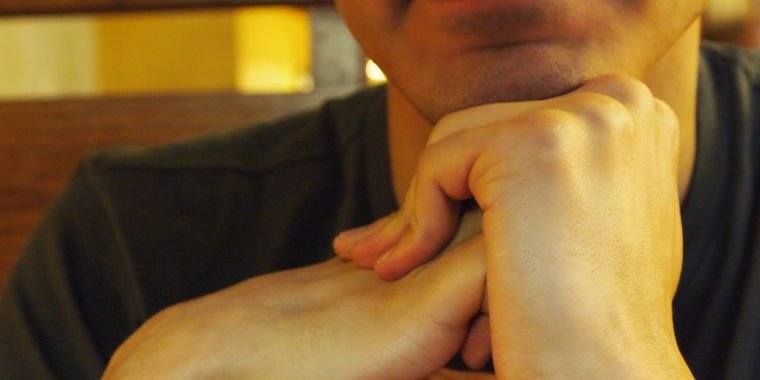 Picture this: a dark alley where the friendly, evil dude has cornered a helpless plot point. Behind the evil guy looms someone who is as wide as he is tall. The generic muscle has a shaved head, missing teeth and an ingrown T-shirt. The plot point contracts as the muscle moves inward. But before the near-dead plot point is thrashed, muscle lurks and the sound of knuckle cracking reverberates from the walls.

Despite movie clichés, popping joints are still a mystery. After some experimentation and much thought (and arguing, probably with knuckle cracking), scientists concluded that the popping sound was due to the collapse of cavitation bubbles in the fluid that lubricates joints. That statement went unchallenged for some 40 years, until more sophisticated experiments showed that bubbles were still present in the joint fluid after the popping sound. How could bubble collapse be the source of sound if the bubbles were still there? Now a few scientists have developed a mathematical model of knuckle cracking that shows how both could be true.

Joint popping usually occurs when bones of the joint are suddenly separated by an unusual amount of fluid. As the two bone surfaces move apart, the fluid between the joints suffers a sudden loss of pressure. When the pressure drops low enough, the liquid turns into a gas, creating a bubble. This is cavitation.

The high pressure fluid surrounding the bubble flows in and crushes the life out of the bubble very quickly. The rapid collapse generates pressure waves that leave the liquid as sound waves. The very sharp collapse of the bubbles is what generates the characteristic popping sound. But an important point is that the bubbles end up dead. However, experimental evidence says there are still bubbles in the joint fluid even after the ultrasounds have died down.

The big challenge in understanding this in detail is that it attracts a lot of different physics on many different time scales. It’s actually really hard to model the whole mess from start to finish.

The researchers found that bubble formation probably happens exactly as expected: If the space between the bones in the joint is relatively small, a strong tug will drop the pressure quickly enough to cause some of the synovial fluid to evaporate and bubbles can form. But these equations only model the pressure drop and not the bubbling process. So basically the input to the next stage of the model is not a math bubble with calculated internal and external pressures. Instead, the bubble size is guessed and only the pressure is calculated.

In the next step, however, the researchers were in for a surprise. As expected, the model bubble is rapidly collapsing. But it doesn’t collapse completely – the bubble stabilizes at about half its original size. This, the researchers say, means there is agreement between the cavitation model for joint popping and the experimental evidence. But again, the story is more nuanced. In the researchers’ model, the bubble cannot disappear and collapse to an infinitesimal radius because the gas inside would have to reach an infinite pressure. Instead, the bubble will oscillate slightly and settle on such a radius that the internal pressure and external pressure are equal. That is exactly what the researchers observe in their mathematical model. So, bubble survival is kind of built into their model.

The agreement between experiment and the model is really very good, especially considering the simplicity of the model. My big concern is that by choosing the diameter of the bell and the geometry of the joint, they essentially refined their model to fit. In some ways, that’s true: the model results change with joint geometry. And I think I would expect that. I just can’t imagine a hip joint would make the same sound as a finger joint when popped.

On the other hand, I expected that the diameter of the bell would matter: a larger bell would make a different sound than a small bell. But the researchers tested that and the sound remains the same. While they haven’t investigated the reason, I suspect it’s because no matter how big the bubble is, it can only collapse to 50 percent of its size, and the rate of collapse seems to be the same in both cases, which could produce same acoustic spectrum.

The investigation does not address the ultimate death of these bubbles. There are, I think, a number of possible paths the bubble can take. It could fragment into smaller and smaller bubbles. This would require some sort of instability in the bubble surface, which I don’t think is included in the model. Alternatively, because the bubble surface is permeable, the bubbles disappear and the vapor from the bonding liquid condenses in the surrounding liquid, allowing the bubble to shrink continuously.

Both processes are likely to be slow compared to the process of bubble formation and collapse. So that after the pop we can get persistence of bubbles without turning them into permanent residents of our joints.

Another interesting conclusion from the model is that there are no stable solutions for joint popping forces above about 15 Newtons. This is in contrast to experiments, where researchers have found that people often exert about 100 Newtons of force. The researchers suggest that much of that force is absorbed by the surrounding tissue, so that only a small part of the pressure is applied to the joint.

The model is also quite idealized. It assumes that the pressure waves of one bubble do not affect the formation or collapse of adjacent bubbles. The researchers acknowledge that this is probably not the case because the first bubbles will form along the centerline of the joint. As those bubbles collapse, more bubbles are formed closer to the edge of the joint. The pressure waves from the collapsing bubbles will pass through it and affect the formation and collapse of the eccentric bubbles. These complicated interactions make for a highly targeted environment as far as experimental and theoretical physics go.

In the end, the researchers did something really cool here. They have shown how two experimental results that seem contradictory may not be. At the same time, they have opened up a whole host of new questions: How much force is going into the joint? Why does the size of the bubbles not matter? How do the bubbles affect each other? Where are they going?

The researchers also state that the experimental evidence is rather sparse. The problem is that the cavitation occurs very quickly. Usually, scientists use high-speed cameras to observe the dynamics. Unfortunately, the interior of joints is not as receptive to high-speed photography.