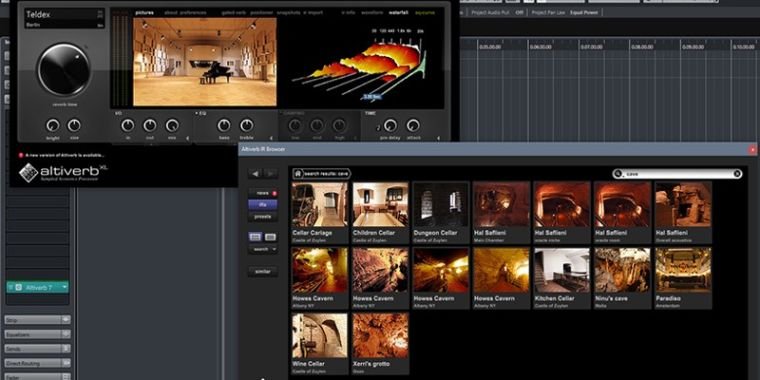 Sound is a very ephemeral phenomenon. So when acoustics Yuri Lysoivanov wanted to capture the unique acoustics of natural caves, he dragged all his recording equipment to Mammoth Cave in Kentucky to analyze the reverberations and resonances. He described this experience at a meeting of the Acoustical Society of America in Victoria, Canada, earlier this month.

Reverberation is a crucial design element, especially for play areas. It’s not the same as an echo, which happens when a sound repeats itself. Reverb is what happens indoors when the sound can’t travel enough distance to produce those echo delays. Instead, you get a continuous ring that gradually “decays” (fades).

American sound engineer Bill Putnam was the first person to use “artificial reverb” for commercial recording in the late 1940s with the Harmonicats’ “Peg o’ My Heart” – accomplished by placing a microphone and speaker in the bathroom of the recording studio. (Bathroom and subway tiles have excellent reverberation, which is why buskers have their favorite haunts in New York City subway stations.) Today, one of the most popular digital techniques is convolution, which uses recordings of the acoustics of real spaces to create highly realistic simulations of those spaces.

Convolution reverb is especially useful for effects specialists in film, TV and video games, who often capture so-called “impulse responses” on location and store them digitally for later use. What is an impulse response? Clap your hands in an empty concert hall or church. That’s the impulse. (A starting pistol or a popping balloon are also good impulses.) The sound reflections you hear are the reaction of the building. Record both the impulse and the response, compare the acoustic profile to a recording of only the impulse for reference, and you can extract a model of the room’s reverberation.

“It’s a misconception that all cave spaces are big caves with extra long reverberation times.”

Huge libraries of impulse responses are now available for almost every kind of space — concert halls, stadiums, chambers, tombs, churches, even the interior of a van — via sampling reverb software like Altiverb. But examples of cave acoustics are surprisingly few, according to Lysoivanov, a composer, music producer, and recording engineer who teaches at Flashpoint Chicago, a Columbia College Hollywood campus. He attributes this in part to low demand, due to a lack of knowledge about how interesting cave acoustics can be. Indeed, that was what inspired him to undertake the project in the first place.

“With so many space and concert hall impulse responses available, there really isn’t much focus on caves,” Lysoivanov says. “I think it’s a misconception that all cave spaces are these big caves with extra long reverberation times. There’s quite a bit of that, [but] many cave spaces are smaller and have a very pleasant-sounding reverberation.”

That’s why he chose Mammoth Cave, the longest cave system in the world: it’s a 400-mile network filled with a wide variety of caves and other spaces, with an equally wide range of acoustics.

The predominant limestone and sandstone walls in Mammoth Cave tend to reflect sound in an aesthetically pleasing way. The caves are the result of natural geological processes that take place over thousands (or hundreds of thousands) of years. That means they develop all kinds of interesting geometries and strange angles. The result: “all sorts of unique diffusion patterns that are unlikely to be found in man-made designs,” Lysoivanov says. “No two cave environments are the same, so having an impulse response from a specific cave gives you a unique reverberation that doesn’t sound like any other room.”

Of course, there is an inherent challenge to the on the spot acoustics in the first place, as it can be difficult to get audio equipment in and out of caves. Lysoivanov and his assistant made sure their rig was mobile enough to be assembled and disassembled in 20 minutes and fit in two backpacks and two duffel bags. But the equipment weighed hundreds of pounds and had to be lugged for many miles through some very narrow openings.

They had only one day to capture the acoustics of four separate rooms in Mammoth Cave: two with pleasant reverberations (the Methodist Church and Lake Lethe) and two with rather strange resonances (the Wooden Bowl Room and Cleveland Avenue). Reverberation times were surprisingly short for the first two, 1.5 and 4 seconds respectively, with Mammoth Cave having a decay characteristic similar to that of a concert hall. The impulse recordings for the Wooden Bowl Room and Cleveland Avenue showed low, sustained resonances that Lysoivanov said would be ideal for adding depth and tension to the sound design.

Lysoivanov would like to go back to Mammoth Cave in the future to do even more impulse shots. “The [National Park Service] scientists were very enthusiastic about our work and extended our research permit so that we could come back,” he says. “They said that, to their memory, they have never let people go inside to do acoustic analysis of their caves. I would love to build a body of work that captures the sounds of these beautiful spaces.”