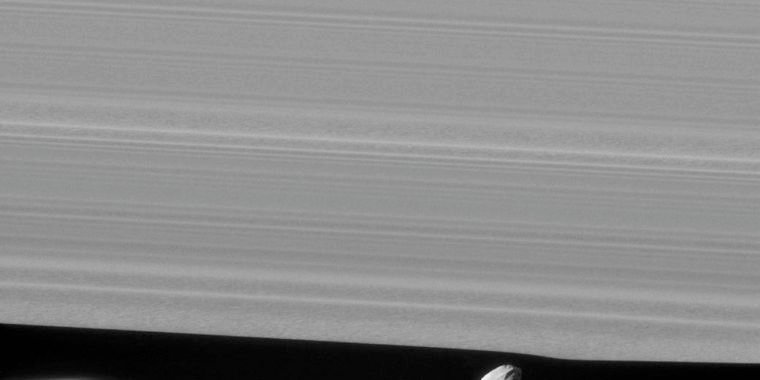 Saturn has an extensive ring system that extends 282,000 km from the planet, or about three-quarters of the distance between the Earth and the moon. Within this structure, there are a dozen significant gaps, one of which is the Keeler Gap located near the outer edge of the planet’s main rings. The small moon Daphnis has bridged this gap, which is only 42 km wide.

One of the main advantages of having an orbiting spacecraft in a planetary system is the many opportunities to image fine features, such as the 8 km wide moon Daphnis grazing through this narrow gap. And on Monday, NASA’s Cassini spacecraft captured an amazing image of this interaction as Daphnis zoomed past Saturn’s rings.

The image shows a fairly smooth surface on the moon with some craters. Intriguingly, Keeler Gap’s normally sharp edges show a wavy feature, likely caused by a close approach by Daphnis. Note the faint, narrow tendril of ring material left just left of Daphnis, likely due to Daphnis pulling this material out of its typical orbit.

This isn’t the first time Cassini has observed Daphnis disrupting Saturn’s rings. Photos taken from various angles have shown the vertical component of waves created by Daphnis, suggesting they rise between 0.5 and 1.5 km high, towering well above the rings that are only about 10 or 20 meters thick.