Can we construct a theory in which space and time are not supposed to exist? | Techilink 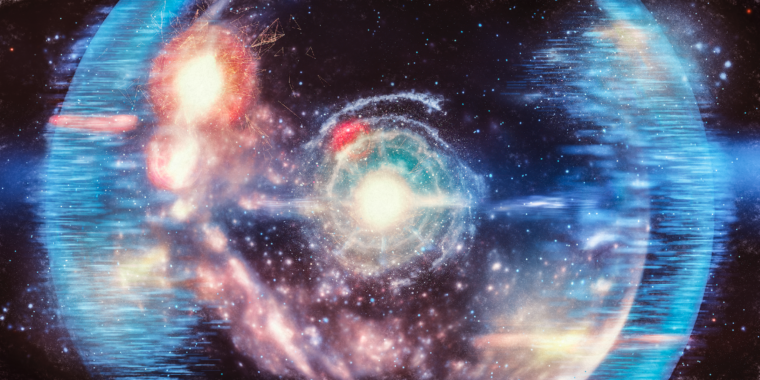 In recent decades, a field of physics has developed that postulates the existence of mysterious algebraic entities called spin networks. These networks – presented as the constituent parts of space and time – condensed to produce the universe as we know it. That condensation resulted in the event we currently call the Big Bang, giving the field its name: condensate cosmology.

It may sound like a strange idea, but we already know that the universe works in very strange ways.

The idea, technically called “Group Field Theory (GFT) condensate cosmology,” is a branch of quantum gravity, a field of physics that aims to establish the foundations from which everything from light and matter to space and time is made. . It’s an idea based entirely on theoretical calculations – and it’s totally untested at this point. Condensate cosmology requires a lot of abstract reasoning to even understand it.

Despite these challenges, quantum gravity has captured a lot of attention from some of the sharpest minds in all of physics. The ideas are bold and daring, highly creative and extremely imaginative.

Quantum gravity was formulated to address one of the greatest problems in all of physics: the need to understand the two great theories of the 20e century — general relativity and quantum mechanics.

The first provides a framework for understanding the world in terms of space and time, and includes behavior over great distances. General relativity introduces the idea that time is relative and that gravity itself exists because of a curved space-time. As Einstein first realized, a ball does not fall to Earth because it is attracted to its mass, as Newton told us; it falls due to the existence of a space-time field that permeates the universe and curves around large objects.

Quantum mechanics is a mysterious yet incredibly accurate theory that describes the world of the very smallest. It tells us that both particles and fields exist in discrete units that, due to uncertainty, can only be described probabilistically. The theory also describes entanglement, the mind-boggling phenomenon in which physical systems can become so intertwined that they lose their independent, individual reality and begin to obey rules that apply to a collective.

As far as we can tell, these two theories are both right – and at odds with each other. Their coexistence generates a paradox, which means that physics is confused in a sense. While quantum mechanics treats reality in a discrete, granular way, relativity tells us that space-time, and thus gravity, is continuous and nondiscrete.

One way to deal with this is to prioritize one of the theories. Since we know that the world is quantum, general relativity must be an approximation of an underlying quantum description of space-time itself. And this suggests that any unification of the theories requires gravity to become discrete.

In recent decades, a branch of quantum gravity called Loop Quantum Gravity (LQG) has shown some potential in solving the challenge of making gravity discrete. LQG starts with Einstein’s field equations, but it digs deeper into what might be hiding beneath the surface of space-time. Mathematics produced countless discrete geometric objects, including loops, grids, and polygons, arranged in various structures called spin networks and spin foams. Together they can describe the structure of reality itself – these geometric idiosyncrasies of LQG do not exist in space and time, but rather they to be space and time and thus the actual constituents of gravity itself.

While recent advances have greatly developed LQG, the idea has a long history. The dichotomy between general relativity and quantum mechanics became apparent during the 20e interwar of the century. This led to approaches to quantum gravity developed by taking general relativity and using different methods to quantify it. But the approach to this problem changed in the 1970s and 1980s as physicists began to learn new things from semi-classical physics, according to Daniele Oriti, Heisenberg Group Leader at the Arnold Sommerfeld Center for Theoretical Physics, Ludwig-Maximilians-Universität in Munich. .

Oriti told Ars that emerging ideas about black holes at the time centered on using quantum mechanics to describe the matter fields around them. This work suggested that theorists may need a different, more radical approach to quantum gravity — rather than just quantifying general relativity, a new way of understanding the nature of space-time at the microscopic level might be needed.

These ideas derived from black holes suggested that the gravitational field itself is not really fundamental, whether classical or quantum. Instead, it became clear that the gravitational field could be a manifestation of something more fundamental, something that doesn’t look like a field at all and so cannot be described in standard spatio-temporal ways.

New approaches to quantum gravity, such as LQG, began to emerge during this period. In the 1990s through the 2000s, LQG gained a lot of credibility with a growing population of theoretical physicists. “One thing LQG achieved was a precise suggestion of what space-time might look like on a more fundamental level,” Oriti says. “It was discovered that, at least according to theory, the basic entities of space and time are nothing like the gravitational field as we know it. In LQG we call these basic entities spin networks, which are discrete, algebraic objects.”