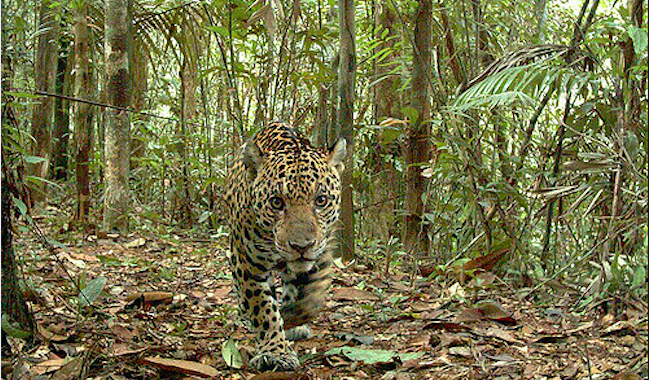 Over the past two decades, automated wildlife cameras, also known as camera traps, have proved invaluable in ecological research and conservation. Their sensitive motion detectors have enabled scientific investigations of rare or shy animals in dense forests and as a result have become more widely used around the world.

But camera traps often take pictures of both people and wildlife. This has important implications for privacy and human rights and could ultimately undermine conservation goals.

We surveyed researchers who had deployed camera traps in ecological or conservation projects. More than 90 percent of the 235 respondents said their cameras had captured both people and wildlife.

Less than nine percent of researchers who had captured images of people initially planned to do so. But most said they took advantage of it as soon as they got the pictures. For example, nearly half of respondents who had photos of apparently illegal activities (such as poaching) subsequently used them to inform conservation management or law enforcement, sometimes by sharing them with third parties (notably the police and park managers).

For that reason, the ability of camera traps to monitor both human and wildlife activity in areas of conservation interest may at first seem like a double win for conservation. But the fact that these cameras often take pictures of people can be very problematic for two main reasons.

First, many respondents said they had captured images that they considered either private (e.g. people going to the bathroom) or that showed a person trying to avoid the camera (e.g. people covering their faces). .

In some countries, distributing images of people without their consent can lead to significant penalties. Even if this is not against the law, steps should be taken to ensure that camera traps do not infringe reasonable rights to privacy.

Second, even if images of people are not used or shared, camera traps can still generate fear and anger – and this can lead to local resistance to camera traps. Since the long-term success of most conservation projects depends on the support of the local population, it is vital that their issues with camera traps are taken seriously.

Three quarters of the researchers we surveyed reported local objections to cameras, either in the form of complaints or direct interference such as damage or theft. Sometimes people went to great lengths to interfere with the cameras. For example, one respondent said they once found a patch of burnt ground, just one square meter in size, right where their camera had been. When we asked what researchers thought had caused these instances of interference and objections, the most common response was “fear or concern about what might happen to the images.”

This fear can take extreme forms. For example, one of our respondents in South America said they found a woman next to a camera trap who believed it was being used to take pictures of her children for kidnapping purposes.

It is clear that conservation projects whose cameras are damaged or stolen incur the cost of replacing equipment and often loss of data. For these reasons alone, it makes sense not to upset or frighten the locals. More generally, the hostile relations with locals caused by camera traps can give conservation projects a bad name and even promote harmful activities: Several researchers reported that those who objected to the cameras retaliated by killing wildlife.

Despite the frequency of these problems, they are almost never discussed in scientific or ecological studies. And while most of our respondents recognized the potential problems with using photos of people, the dilemma of how to deal with it is not publicly discussed.

Fortunately, researchers themselves are thinking about this problem. Protocols put in place by our respondents to manage photos of people captured by the camera include blurring or not sharing them publicly. This blurring could even be done automatically, using machine algorithms, so that images with people are blurred before they are seen by human eyes.

Some individual investigators have gone further and significantly involved local communities in their projects, reassuring them that the cameras were not there for law enforcement purposes, involving them in deploying the cameras and sharing the footage with them. But despite these independent efforts, no standard guidelines have been agreed upon by conservationists to date.

The implications of camera trap technology for people’s privacy and well-being should be discussed more broadly and openly and good practices shared. Conservation projects need to ensure they have the right protocols in place to minimize social impacts and prevent useful wildlife research tools from harming both the short- and long-term success of conservation projects.

This article is republished from The Conversation under a Creative Commons license. Read the original article here.

Disclosures: Rogelio Luque-Lora receives funding from The Cambridge Trust. Bill Adams and Chris Sandbrook do not work for, consult, own stock in or receive funding from any company or organization that would benefit from this article, and have not disclosed any relevant affiliation outside of their academic tenure.