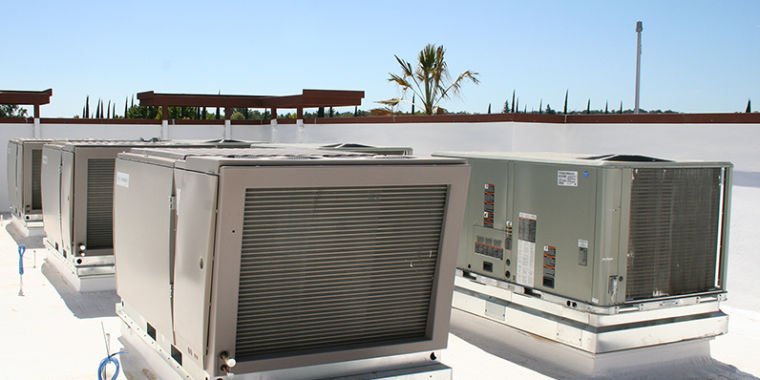 Ice Energy, a Santa Barbara-based company, is partnering with NRG Energy to provide 1,800 “ice batteries” to commercial and industrial buildings served by Southern California Edison (SCE) electric utility. The units are expected to reduce air conditioning bills by up to 40 percent and eliminate 200,000 tons of CO2 in the next 20 years.

Ice Energy has been building ice-based cooling systems since the early 2000s. Like pumped storage or compressed air “batteries,” Ice Energy essentially stores electricity by drawing power from the grid during off-peak hours to freeze water in a special container. At peak times, when electricity costs are high and grid operators are struggling to keep up with demand, Ice Energy’s systems kick in and use that block of ice to cool the space the air conditioning normally serves.

While the system doesn’t store energy like a lithium-ion battery, it draws energy to “charge” and replaces the energy it would take to run an AC unit when it “discharges.” That’s good for the environment, because air conditioning compressors are energy intensive, and when a city like Los Angeles is going through a heat wave, people tend to run their air conditioners more. Grid operators need to meet that demand, and to do so they will often resort to fossil fuel add-ons, such as natural gas peaking plants, that can be brought online relatively quickly. But if local off-grid energy storage systems can meet the additional needs of a home or business before they have to turn to the grid, that reduces the demand that grid operators would otherwise have to meet.

Speaking to Ars on the phone, Ice Energy CEO Mike Hopkins said SCE agreed in April to buy the 1,800 units, dubbed IceBear 30s, and cover installation costs. Hopkins would not say how much the SCE is putting into the deal. There are also some catches: While IceBears can be added to many existing air conditioning units, SCE is looking for commercial and industrial candidates willing to replace aging HVAC systems with something more energy efficient (SCE also offers discounts on upgraded HVAC systems that would be installed with the IceBear units).

What the utility gets in return for its rebates is control over when the IceBears are turned on and off at each commercial or industrial property. Each IceBear 30 is capable of replacing a 10-ton AC unit for three hours, Hopkins said, and SCE will deploy the IceBears on its customers’ rooftops when it needs to reduce its load for three hours. For example, SCE could do this on a hot July afternoon.

SCE does not turn the IceBears on or off individually, but sends the cool air in groups. “While she [SCE] could look at individual IceBear units, the system is really designed for megawatt-scale resource control,” Hopkins said. “They’re going to see them on an aggregated basis.”

SCE’s willingness to participate in this storage plan has political roots. In 2013, California mandated that the three largest utilities serving the state collectively add 1.3 GW of storage to the grid by the end of the decade in a manner that cost-effectively meets peak demand. The deal with Ice Energy and NRG is part of Edison’s own commitment to add various types of energy storage to the grid. The utility has also been buying more traditional batteries from Tesla. “The Ice Bears will provide a total of up to 25.6 MW of peak storage capacity to SCE under 20-year Power Purchase Agreements (PPA),” according to an Ice Energy press release.

The project was also a long time coming. Hopkins said SCE’s commitment to buy storage space “has been suspended… by appeals, mostly involving a gas-surge power plant. It was only in the last month that we were cleared of this legal delay. This is also the world’s largest ice storage deal to date. Ice Energy signed a deal with the Southern California Public Power Authority (SCPPA) in 2010 to deploy up to 1,500 IceBear units in Southern California. But Hopkins said economic conditions were not yet right.

“That project never really went ahead,” said the CEO. “The contract… was a real surprise to everyone, because no one had signed such a large energy storage contract. The city of Glendale ordered 2MW, and then the contract just sat there, which I think is a reflection of the fact that in 2010… utilities just didn’t order storage. From 2013, when the state of California mandated storage, the world had clearly changed.”

In 2015, Ice Energy partnered with California’s Riverside Public Utilities (RPU) to install 5 MW of capacity on commercial buildings over five years. The utility determined that the contract could be terminated if the Ice Bears did not meet expectations. Four units have just been installed on top of California Baptist University.

Ice Energy also just launched a residential product, which will go into production in the summer. The company has re-contracted with SCPPA to offer 1 MW of residential storage – approximately 100 IceBear 20s – which are smaller than the IceBear 30s SCE purchases for commercial and industrial buildings. Hopkins also said Ice Energy is still working on a similar deal to subsidize residential IceBears with a Massachusetts energy company, which he declined to name because the deal was not yet finalized. Ultimately, Ice Energy hopes to sell its product through retail channels as well as energy companies.

“The residential product is designed to function ideally with solar energy,” explains Hopkins. “If you’re limited in net metering… our home system can actually make its ice cream in four hours, you’d use your solar over gene [over-generation] to make ice cream” and eliminate peak hours of AC in the afternoon and evening.

An even smaller unit, the IceBear 10 (also known as the Ice Cub), can act as a heat pump and run in reverse during cold spells. The Cub heats your home with electric heating, which probably isn’t a practical option if you live in a part of the US that requires heating all winter.

For now, Ice Energy doesn’t seem to have many competitors in the thermal energy storage space. A company called Axiom freezes salt water during off-peak hours to provide cooling during peak hours. (Ice Energy says it’s working on that too, developing a system that uses glycol as an additive instead of pure water, as the IceBears do.)

But the concept has been around longer: see this PG&E explanation from 1997 (pdf). Cost has been a major stumbling block to adoption, and Ice Energy doesn’t post cost-related numbers on its site. (For residential systems, the company notes that access to clean energy incentives from state and federal governments “can reduce the cost of a home IceBear to the point where it is no more than, if not less than, a conventional AC unit for home.”) The efficiency of the system also depends on where you are in the country: In a 2016 post on Altenergy Mag, Hopkins wrote that “Polar bears are most efficient in areas where the nights are significantly cooler than the days.”

For now, Ice Energy appears to be solving the cost and efficiency issues by selectively partnering with utilities in regions that receive a lot of heat. And whether or not ice-based systems take off, the idea of ​​phasing out energy use with ice is certainly cool.