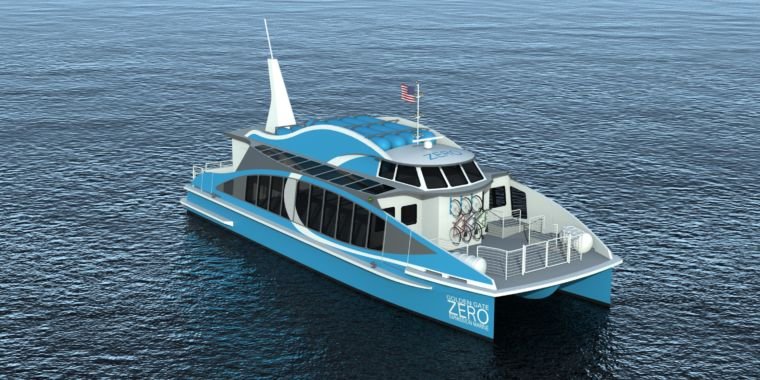 All aboard: Construction of a hydrogen fuel cell boat, aiming to be the first of its kind to go commercial, was announced in San Francisco on Thursday.

A startup called Golden Gate Zero Emission Marine (GGZEM) held a keel-laying ceremony for its new, 70-foot hydrogen fuel cell ferry on Thursday. The keel laying marks the start of construction of a vessel and GGZEM expects it to be ready in September 2019.

The boat carrying the . will be called Water-Go-Round, will likely be the first hydrogen fuel cell boat to sail commercially and transport people around San Francisco Bay. In general, ferries tend to run on diesel fuel, which causes significant noise pollution underwater, as well as greenhouse gas emissions and potential marine pollution from leakages. In contrast, a boat with hydrogen fuel cells would be quieter and the only emissions while sailing on the water would be more water.

That said, getting the hydrogen fuel to fill the boat isn’t a trivial problem. Currently, much pure hydrogen is extracted from methane, and hydrogen transport is a challenge requiring energy-intensive compression or energy-intensive cold storage. Researchers at Sandia National Laboratories recently found that when synthesis, transportation and storage are factored in, hydrogen fuel cell boats that run on gas-derived hydrogen are unlikely to outperform diesel boats in terms of emissions.

However, hydrogen can be made by electrolysis of water, using renewable energy as an electricity input. The hope is that surplus renewable electricity from utility-scale renewable systems can be used to make hydrogen fuel during periods of low demand (at night, for example, when wind turbines produce a lot of electricity but homes do not use appliances).

GGZEMs Water-Go-Round is being built using a $3 million grant from the California Air Resources Board (CARB), which funded the grant with proceeds from California’s unique cap-and-trade system. A press release from GGZEM states that “The Bay Area Air Quality Management District (BAAQMD) is managing the project, along with other partners including Bay Ship & Yacht Co., BAE Systems, Hydrogenics, Red and White Fleet, Incat Crowther, Hexagon Composites, the Port of San Francisco and Sandia National Laboratories.” Sandia in particular is an important partner because GGZEM emerged from hydrogen fuel cell research conducted by an employee of the lab.

After the ship is completed in mid to late 2019, GGZEM says it will Water-Go-Round for three months to give Sandia researchers the opportunity to assess performance and collect data on this first of its kind boat. GGZEM hopes to sell several ships such as the Water-Go-Round to Red and White Fleet, a commercial sightseeing and charter company operating in San Francisco Bay. Red and White Fleet has made its own commitment to be 100 percent emissions-free by 2025.

According to the GGZEM website, the Water-Go-Round can hold up to 264 kg H . save2 and be able to “work up to 2 full days”. In addition, the company says a 100 kWh battery will “provide a boost to reach 22 knots”.