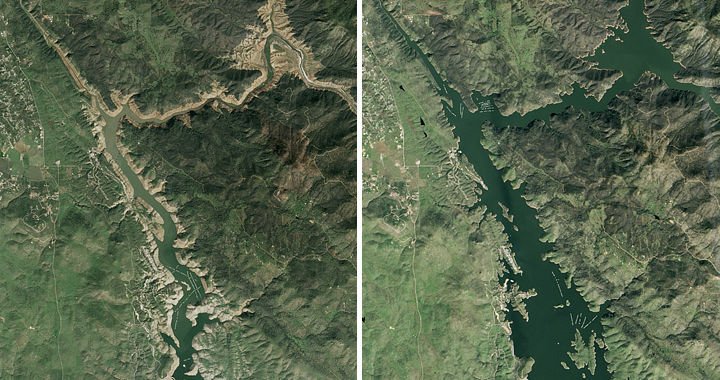 As the past few years have reminded us, the weather in California means you need to be prepared for anything. From 2012 to 2016, the Golden State saw a historic drought that led to water restrictions — and saw land areas sink as groundwater use increased to compensate. But the winter of 2016 brought too many rain, causing flooding and evacuations under the Oroville Dam.

Variable rainfall is a natural part of California’s climate, but what will happen if climate change continues? That’s the question a team led by UCLAs is asking Daniel Swain recently started replying.

While climate change projections show a warmer California, total rainfall isn’t expected to change much. But in this case, the researchers used climate model simulations to analyze precipitation variability in particular, rather than just annual totals. They compared historical weather records, an 1800-year simulation of the climate before the industrial revolution, and 40 simulations of climate change from 1920 to 2100 (assuming high future greenhouse gas emissions). These long simulations allowed them to collect meaningful statistics for various weather patterns.

To easily relate the results, the researchers used notable historical events as points of comparison, such as the drought of 2012-2016 and the flood of 1862. You can calculate how rare such events have been from historical data. The climate model simulations can then show whether such events occur more often in a warming climate.

Take, for example, the extremely wet winter of 2016-2017. The simulations show that this will occur two to three times more often by the end of this century. That Great Flood of 1862 was actually a series of atmospheric river storms over about a month, leading to a 200-year flood. If normal weather patterns continued, we would have less than a 50 percent chance of seeing another flood like this by 2100, but most simulations had two or more such floods this century.

On the dry side, the 1976-1977 winter drought was a 100-year event, but its frequency in the simulations is increasing by about 80 percent in Northern California and 140 percent in Southern California. However, the outlook for a three-year drought like 2013-2015 is mixed. Only a small portion of the state showed a significant increase by the end of the century — perhaps the researchers speculate, as the likelihood of a wet winter interrupting a drought increases.

So how about that wild swing from drought to soaking winter in 2016? (The researchers describe this as “rainfall whiplash.”) The projections show that by the end of the century, this behavior will be twice as common in Southern California and 25 percent more common in Northern California.

Why more extremes? First, there’s the well-known fact that a warmer atmosphere can hold more water vapor, meaning more moisture can be squeezed out of the clouds when it rains. Beyond that, the atmospheric pressure over the eastern Pacific that determines California’s weather appears to be amplifying in the model simulations. That is a recipe for drier and wetter years.

In addition to the comparisons with historical events, the researchers note that the simulations also include unprecedented extremes that current infrastructure is unlikely to handle. Unprecedented or not, the projections imply that the state must prepare for more rough weather in the coming decades, although reduced global greenhouse gas emissions would go a long way to avoiding the worst.

In a blog post about his research, Daniel Swain writes: “For some time now, the greatest uncertainty in climate science has been how we as a society choose to respond to this growing global threat. The optimistic view: There is still time for us to take bold, decisive actions that will shape our planet for decades (and even millennia) to come…enough about our plausible climate future to make informed decisions.”