Borderlands 3 is much more Borderlands, in both good and bad ways |Techilink 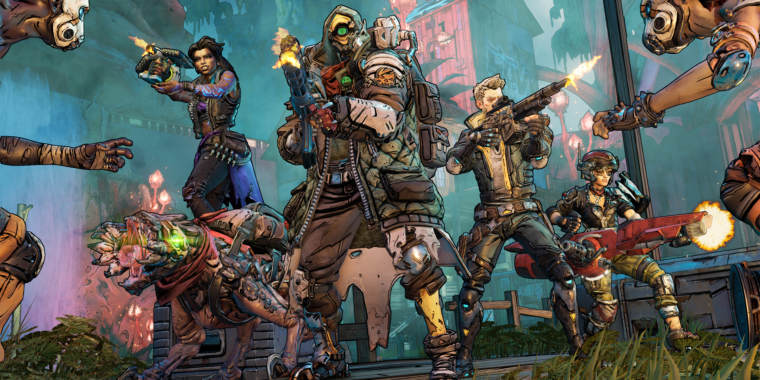 We had to wait seven years for a new numbered game in the border areas series and almost five years since the (surprisingly fun) Borderlands: The Pre-Sequel that was supposed to stop us in the meantime. Now that we’re a few days into retail launch (our rating codes arrived just hours before the game went on sale) and spent quite a few hours plowing into the game, we’re struck by how little border areas has changed in the intervening time, both for the better and for the worse.

On the good side, this means that: Borderland 3 still offers the same kind of slick, fast, varied and just plain smooth shooting experience that the series has always offered. As usual, the game offers a seemingly endless variety of weapons that, crucially, all differ and feel completely different from each other in a number of ways. Experimenting with new gear to find the right mix of impact, accuracy, magazine size, reload speed and special abilities is a never-ending and continuously fascinating process.

Gaining access to a new weapon that’s right for your style still delivers that adrenaline rush in a way that can’t be matched by finding another identical shotgun in most other shooters. And many weapons now have a secondary fire option, greatly increasing the level of customization by providing new pros and cons.

That variety now seems to be matched by the game’s environments as well. The neons and blues of planet Promethea’s urban guerrilla warfare offer a welcome change from the brown and gray desert environments border areas is commonly known for (Pre-sequel also showed a lot of promise on this point). Even in the relatively early start, it feels like there will be plenty of new planets and side missions to keep players busy if they want to hit that tenuous 100% completion.

Vehicle navigation is another treat, with a good variety of spirited ATVs to show you around quickly. These vehicles seem a bit overpowered, if anything, with artillery and shields that can easily blast through enemies on the ground. Speaking of overpowered, I had a blast using Moze’s special ability to summon a huge bipedal “Iron Bear” mech to make quick work of large groups of enemies. It’s a great change of pace if you’re tired of dodging incoming fire and hiding behind random bits of cover.

What hasn’t changed at all over the years is border areas‘s writing, which artlessly alternates between corny, cringe-y and “extreme” in the ’90s skateboarder sense of the word. That’s not a huge change from previous games in the series, to be honest, but it comes across as more dated and more youthful with the benefit of seven extra years of perspective.

If you think the word “ass” used ad nausea is funny in itself or that a guy in his underwear saying “bro” over and over is the epitome of comedy, then you’ve come to the right place. Otherwise, most attempts at character moments feel forced and second-degree in a way that would probably make the average teen groan.

Messy around the edges

Even a few hours in, Borderland 3 has shown enough enemy variety to keep the shooting from getting old, and both beasts and humans show a lot of personality in their animation and sound design. These opponents have a good tendency to take cover, flank your position and even run for a better vantage point when it suits their strategy. That being said, there have been a few situations where I’ve noticed an enemy getting confused and just standing still uncovered in the middle of a firefight, only to break out of their revelry once hit with a bullet. hit (it’s way too late for them at that point).

That kind of slop around the edges has cropped up in a number of ways during our playthrough so far. At one point, our extremely obnoxious robot companion Claptrap got stuck in a loop, repeating the same two quest hints every few seconds, even though the quest had already been completed (which required restarting the game to resolve it). In another firefight, my AI companion ended endlessly in an impenetrable and inaccessible building where our last opponent had somehow been hiding (another reboot fixed this, but not before I had to finish the whole fight again).

At other points, I’ve seen guide characters simply stop before reaching our destination (to twist there later without explanation) or my mini-map disappear from the corner of the screen for an extended period of time. Not to mention the choppy frame rates and occasional crashes I’ve seen with the PC build so far.

Only, none of these technical problems are mortal sins. All things considered, though, during the game’s opening hours, the whole thing feels a little more unpolished than the long wait would warrant.

In the run up to Borderland 3‘s release, Gearbox has repeatedly emphasized a slew of “quality of life” interface improvements it has made to the series over the intervening years. And sure, things like easier access to fast travel, the one-button refill of all available ammo in stores, and the ability to pull yourself to ledges or slide out of a run are all nice.

But these fixes also highlight the more anachronistic bits that are still unresolved. For example, the map system cannot display more than one objective location at a time. Instead, you have to manually scroll through a list. This is a problem in plotting the most efficient routes through a burgeoning list of kill-and-fetch quests.

The weapon comparison interface is also a confusing mess, especially in stores, where seeing how new options compare to your current loot should be a priority. Then there’s the way new item info boxes often appear with an inflated zoom level as you approach, cutting important information above or below the edge of the screen unless you position your character just right.

These may seem like nitpicks for a game whose core shoot-and-loot loop is as fun and immersive as ever. But it’s little things like this that so far stand in the way of me being completely immersed in the world of border areas† I hope by the time my time with the game is up they end up with more problems than ever-present annoyances.